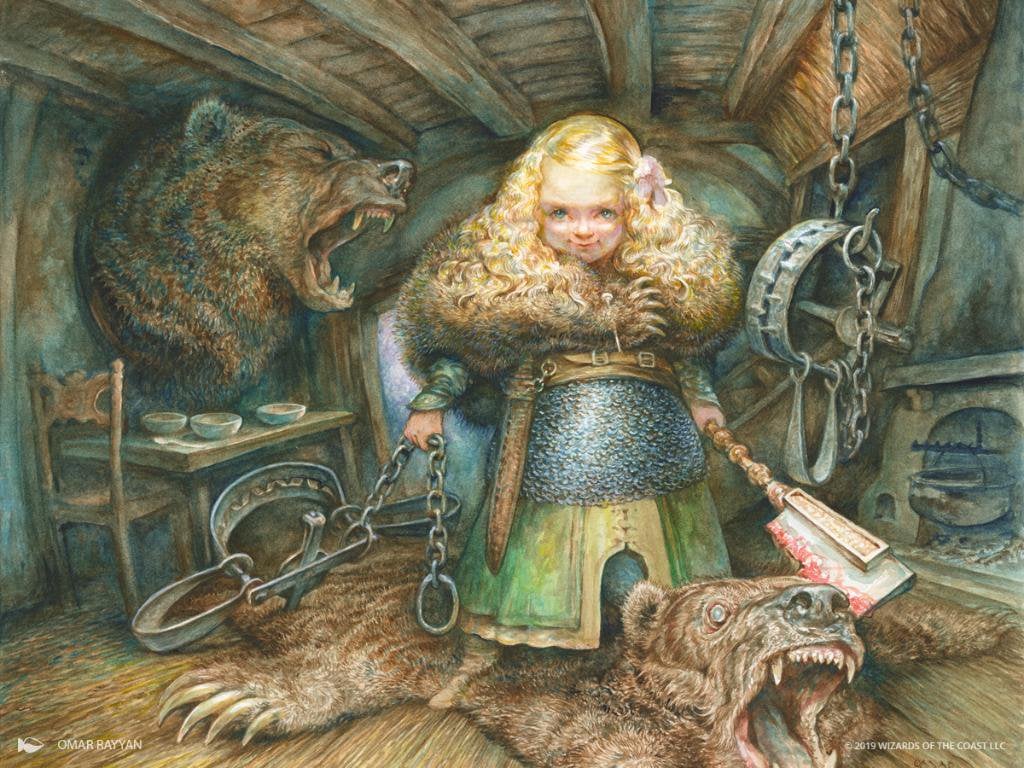 The Throne of Eldraine set is here and Green has plenty of power to stomp those opponents in the Sealed and Draft Limited format.

Green is the easiest color wheel slice to build a mono-color deck in Limited. If the stars should align in a Sealed or Draft tournament, going heavy Green or Mono-Green has its many advantages. In combination with other colors, there are plenty of opportunities, too.

Before diving into the winners and losers in Green, there are a handful of cards that deserve an honorable mention. They might not be first picks but will prove themselves worthy as solid cards in a variety of deck builds.

Feasting Troll King (Rare) fits the ELD design of going Mono-Green or dominant Green in a dual-colored deck. Any 7/6 with trample who can return from the graveyard with ease, is a solid pick for those wanting to play Mono-Green in Limited.

Likewise in a deck-dependency deck, is Gilded Goose (Rare). A bomb of a card in Standard, it will won’t play to its full potential in Limited unless in a Mono-Green or Black-Green build. If Oko, Thief of Crowns happens to fall in your lap, however, Gilded Goose is a must-have for a Simic Ramp build.

Giant Opportunity is a great card in a Blue-Green deck but fails to provide value elsewhere. And while a 7/7 for three mana is awesome, it doesn’t have trample. Fell the Pheasant is another pick many will want to put in the main deck but should be used strictly as a sideboard card only.

Here are the winners in Green.

Simply as a four mana 4/4 creature with Deathtouch and Vigilance, Questing Beast is a solid first pick. Not all of its abilities will come into play during a Limited match, but having Haste as an added bonus makes drafting Questing Beast quite simple.

Keeper of the Fables (Uncommon)

In a heavy Non-Human deck, Keeper of the Fables is a decent card to have. It provides card draw upon damage dealt directly to a player through one or more Non-Human creatures. And with the number of beasts that have trample in Green, it’s likely a player will get multiple opportunities to capitalize via this cantrip and increase the deck’s tempo.

Being turned into an Elk has its advantages. If an opponent has a powerful creature in play and you don’t have the means to deal with it, this Enchantment is an alternate form of removal.  It can also beef up a smaller creature the controller owns.

And to top it off, Kenrith’s Transformation provides card draw. Green removal is often hard to come by, making this Enchantment a solid pick.

Outmuscle is solid removal at the cost of four mana. And if playing in a predominantly Green build, it’s not difficult to take advantage of the Adamant mechanic attached to it.

As an Adventure card that provides ramp of any color mana, Wildborn Preserver is a top first pick. Even at the cost of three mana for the creature side, it’s still worth it.

Fierce Witchstalker is a four mana 4/4 with trample. In Limited, this is a solid card and worth picking up in Red-Green, White-Green, Black-Green, and Mono-Green builds. It especially fits in well with Black-Green, creating a Food token upon entering the battlefield.

Much like the other color wheels in Limited, a card listed as one of the worst doesn’t apply to other MTG formats. With Green, there are cards that are considered too deck-dependent. These cards require too much effort to pull off, despite looking like a solid pick on the surface. While others are simply bad cards.

Here are the losers in Green.

In Standard, Edgewall Innkeeper has the potential to be a solid one-drop. In the Limited format, however, it’s what the pros like to call “deck-dependant.” The likelihood of drafting multiple copies of Edgewall Innkeeper and building a predominant Adventure themed deck is low, even with Green-White decks favoring adventures.

In Sealed, Edgewall Innkeeper could hold more value than Draft. But at best, it’s still an average card.

There are Artifacts and Enchantments in ELD that need answers to deal with. Flaxen Intruder won’t likely provide that, however, being a 1/2 who has to deal damage to a player first. On the Adventure side, Welcome Home is weak too. Seven mana for three 2/2 creatures equals poor value.

Food is a mechanic in ELD that holds many benefits, but in Green, there are so many other options for obtaining a single Food Artifact token. Curious Pair is filler at best, providing little value in monocolored and dual-colored builds.

Sorcery speed spells are already on the weak side and Wolf’s Quarry has a weak spell ability to boot. For a total of six mana, a player gets three 1/1 tokens. Wolf’s Quarry offers horrible value for its cost to cast and should never be played.