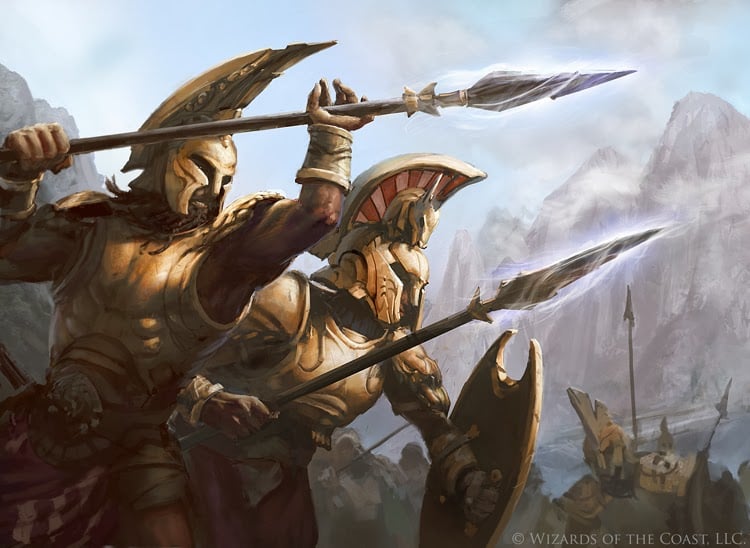 There was recently a partial leak of Magic: The Gathering‘s upcoming set when some players allegedly found five packs for it inside a Walgreens. Only 37 of the set’s over 200 cards were revealed, but there’s plenty of new information on the expansion, Theros: Beyond Death.

Here’s what we learned from the leaked Theros: Beyond Death cards.

Devotion is a returning mechanic from the original Theros. Simply put, devotion to a color means to count the number of times that color’s symbol appears on permanents you control.

Fans aren’t really surprised that this mechanic is returning, though. The prominence of heavily color-symboled cards in Throne of Eldraine, like Feasting Troll King and Ayara, First of Locthwain, all but guaranteed this move. Still, Devotion had a strong role in Theros’ Standard meta with cards like Grey Merchant of Asphodel—and it’s a welcome addition.

Constellation is another returning mechanic, but it has fans much more excited. The mechanic was a part of the final Theros block set, Journey in Nyx. Despite being arguably the most enchantment-focused mechanic of the whole block, its appearance in the final set meant it had a very limited role in Standard.

That, plus Journey being a small set, means there were only 16 cards with Constellation to begin with. It simply wasn’t enough.

Now, Constellation returns and fans are excited to see the mechanic get the proper attention it deserves. The mechanic has major combo potential, giving free triggers every time you play an enchantment.

If it felt like Sagas just left Standard, that’s because they just did. Sagas were created and released alongside the Dominaria block as unique enchantments that followed a historical tale from that plane—and they triggered cool effects alongside each “chapter.”

Although it’s still fresh in many players’ minds, Theros seems like a great block to feature Sagas in. Sagas are enchantments, so they align mechanically, but they’re also able to tell tales of the plane. Theros is based on Greek mythology, after all, and has a lot of lore built into it.

Last but not least, Theros: Beyond Death has a new mechanic called Escape.

Escape is a classic graveyard mechanic. Simply pay a cost and exile a few cards from your graveyard to play the card again. Chainweb Aracnir shows that at least some Escape cards have additional benefits if you cast them for their escape cost.

This mechanic is also featured on the return of beloved planeswalker Elspeth, so we expect it’ll be all over Standard in 2020.

Several other design themes are apparent from these leaked cards and they should open up some new playstyles for existing Standard decks.

Enchantments represent the gods and demigods of Theros and play a huge role in the plane’s mechanics. Two of the mechanics above are directly related to enchantments, but players should also expect a healthy amount of enchantments regardless of whether they’re trying to use those mechanics.

Wizards of the Coast will intentionally be printing mechanics that often go on other types of spells, using tricky rules to make it all work. Ashiok’s Erasure, for example, is an enchantment that also functions as a counterspell.

This is similar to a previous mechanic, Ferocious from Khans of Tarkir, but it seemingly allows for more flexibility and simplified language. Traditionally, this mechanic was on Temur colors: blue, red, and green.

Cast a spell that targets a creature you control

It’s not exactly the Heroic mechanic (another from Theros), but this theme is pretty close. Leaked cards like Hero of the Nyxborn hint heavily at a “target your own creature with a spell” theme.

This theme has also seen some fringe attention in recent sets, primarily in the RW Feather deck archetype. Depending on how heavily this theme is pushed, Standard could see a top-tier Feather deck in 2020.

Artifacts are no stranger to being a focused theme in sets and Theros: Beyond Death looks to continue this trend in the Izzet colors. Dalakos, Crafter of Wonders hints strongly that we may also see a particular focus on equipment.

One of Theros’ iconic cycles was a set of legendary artifacts all focused on the gods of the plane. One of those cards, Whip of Erebos, even saw substantial play in Standard due to its ability to bring back powerful creatures with little downside. The continuation or return of this kind of cycle could be exciting for players to see.

Cast a spell on your opponent’s turn/Flash

There are also quite a few cards that seem geared toward playing on your opponent’s turn. This includes creatures and enchantments with Flash, which lets you play them almost anytime, along with reasons to do so. 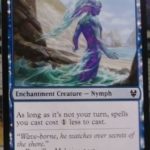