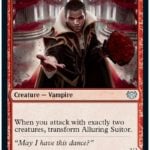 The color Red might be one of the weakest Limited colors within Innistrad: Crimson Vow, but it can still have an impact on the meta due to a few solid Magic: The Gathering removal spells and creature cards.

There are a total of four Innistrad: Crimson Vow (VOW) archetypes that use the color Red: Blue/Red spells matter, Red/Black vampires, Red/Green werewolves, and Red/White Aggro. Red is more of a synergy-based color, providing a few good creatures and a number of cheap removal spells.

Honorable mentions for the color Red include the combat trick Sure Strike, which has proven itself as a strong Instant to play in previous MTG Limited formats. There’s also Blood Hypnotist, a 3/3 synergizing with the VOW mechanic Blood tokens, and Daybreak Combatants, which slots nicely into an Aggro RW build.

From powerful removal spells to berserkers and vampires, here are the eight best VOW Limited cards in the MTG color Red.

Synergizing with vampires as a bite spell, Markov Retribution is a synergistically strong three-drop in the right deck. Outside of a VOW vampire build, it still pumps the team for +1/+0, which coincides nicely with creatures that have Trample or Flying.

Runebound Wolf is a synergistic good card, similar to Markov Retribution, in that the two-drop can become a bomb within a build that has six or more werewolves in it. At face value, Runebound Wolf is just a two-drop 2/2, acting more as a filler card outside of a werewolf heavy deck.

Voltaic Visionary is a two-drop 3/1 that can be an aggressive attacker during the early stages of a game. The human wizard has value when it shows up later in a game too, allowing you to play the top card off your library for a cost of tapping Voltaic Visionary and two life points.

Upon casting a card from your library, the wizard transforms into Volt-Charged Berserker, a 4/3 creature that can’t block but can apply pressure to an opponent at any stage of a match.

Ballista Watcher is a four-drop 4/3 that can transform into Ballista Wielder when it becomes night. The front side isn’t great, even with its paid mana ability.

The back side of the card, however, can deal damage without tapping that prevents a creature from blocking that turn. Ballista Wielder is also a 5/5 at night, able to provide defense and apply pressure when attacking.

Abrade is a reprint that’s proven itself in Limited and Standard formats. There are a few Artifacts that might get played within the VOW Limited format. But for the most part, Abrade is a two-drop Instant that deals three damage to any target creature.

Rendering Flame is a three-drop Instant that deals five damage to any target creature or planeswalker. As an added bonus, if it kills a spirit, it also deals two damage to the spirit’s controller. Rendering Flame won’t take out every card in VOW, but it hits a majority of them at Instant speed.

At face value, Alluring Suitor is just another three-drop 2/3 creature. Attack with exactly two creatures (it doesn’t have to be Alluring Suitor) and the vampire transforms into Deadly Dancer.

Deadly Dancer is still a vampire, has Trample, and 3/3 stats. Deadly Dancer also produces two Red mana until the end of the turn that can be used to pay its mana ability or cast another card.