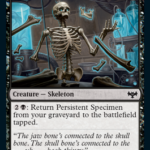 Innistrad: Crimson Vow Limited is a format full of powerful Rares that change games when they enter the battlefield.

To support these impactful cards, Commons and Uncommons help flesh out a deck’s strategy and help facilitate the strength of higher-powered cards. Black is a strong color in Crimson Vow Limited and supports myriad archetypes from aggro to control.

Black pairs with Red in the aggressive Vampires strategy that used Blood tokens to smooth out draws and trigger abilities. When paired with Blue or Green, Black makes use of the graveyard and death triggers to outvalue opponents.

Here are the best Black Common and Uncommon cards in Crimson Vow Limited.

Exploit is a mechanic in Crimson Vow that gives benefits when you sacrifice a creature. Persistent Specimen is a cheap, repeatable Creature that can be sacrificed to Exploit. Three mana to bring this card back is a lot, but in a late-game situation where you need a Creature to sacrifice this will come through in a big way. The ability can be activated at instant speed on your opponent’s end step, leaving you with mana on your turn to play a threat.

A deck probably won’t need more than two copies of this card in it, but chances are this card will not be cut in a deck that leans heavily into Exploit synergies.

This three-mana 3/2 Deathtouch Creature is solid. This will be an effective blocker against an opponent’s big threat. The exploit trigger is powerful and can break a mid-game stalemate. Drawing two cards for the price of two life is an excellent deal, especially when it’s attached to a body that’s relevant in combat.

Creatures with Exploit can sacrifice themselves. It’s not great having to pay three mana and two life for two cards, but if you need to hit your land drop, Fell Stinger can help you get there.

Dead Weight is a playable card in every Limited format. Gift of Fangs is Dead Weight with upside if you have Vampire Creatures. This one-mana removal spell can take out an early Creature and swing the tempo of the game. If there aren’t any worthwhile targets, this can give a Vampire you control +2/+2 and immediately makes it strong in combat. The card is dead if your opponent controls a problematic Vampire, but that’s one small issue with an otherwise playable card.

With the return of Disturb in Crimson Vow, graveyard hate is important to have in any Limited deck. Diregraf Scavenger is a decent 2/3 Deathtouch body that exiles a card from a graveyard. If it hits a Creature, your opponent loses two life and you gain two life. The life gain is relevant against aggro decks where, in Limited, gaining two life can be the difference between winning and losing.

This card can target a card in your own graveyard if you really need to hit the life drain trigger. This is a versatile card that answers several potent threats in Crimson Vow Limited.

Generally, Bleed Dry is better than Hero’s Downfall, the other unconditional Black removal spell in Crimson Vow. Exile-based removal is important in sets that are focused on using the graveyard. -13/-13 is enough to kill every Creature in the format and exile them. This shuts down Disturb and reanimation.

This is a powerful four-drop in a Blood token deck. A 3/3 Menace is a good, evasive body. This Creature enters the battlefield and creates a Blood token. When Bloodcrazed Socialite attacks, you can sacrifice a Blood token to give it +2/+2 until end of turn.

This Creature’s first attack is as a 5/5 with Menace. It’s a big Creature that’s hard to block and has two-for-one potential. Black and Red decks are able to generate Blood tokens quick enough that most attacks should be as a 5/5.