The official release of the Throne of Eldraine set is here, featuring booster packs and Magic: The Gathering preconstructed decks.

In a world where a Realm is a safe place for humans and the Wilds are full of mysterious magic, the Throne of Eldraine (ELD) set is available for casual and competitive tabletop play. In total, the set contains 269 cards: 15 Mythic Rares, 53 Rare, 80 Uncommon, 101 Common, and 20 basic lands.

What’s in the ELD tabletop set?

With the official release of the Throne of Eldraine set, several products are available for purchase.

And for the first time in MTG history, there’s a special collectors booster pack containing alternate frame cards. Priced at around $35 for a single booster pack and $380 for the collector booster pack box (12 packs), the collector’s pack includes showcase and alt-art cards.

Four preconstructed Brawl decks are releasing at the same time as the ELD set, too. Quantities of these decks are limited, however, due to an increased demand for them. Wizards of the Coast is allegedly printing more in the near future. 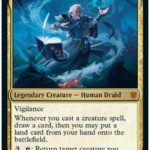 The four Brawl decks are Faerie Schemes, Knight’s Charge, Savage Hunter and Wild Bounty. Each preconstructed deck is priced between $25 to $55 and includes 60 cards with a variety of upgraded treats. A bundle of all four preconstructed decks is also available.

Where can I buy ELD booster packs?

The first place to look for Throne of Eldraine products is a local game store. Prices at these stores might be slightly higher than Amazon, but they’re the foundation that’s helped keep MTG trading cards alive for over two decades.

Where can I play MTG?

Local game stores around the world offer casual and competitive tournaments on a weekly basis. Featuring play in a variety of MTG formats, a local game store provides a safe and instructive environment for all levels of play.

New and veteran players can also play digitally via MTG Arena (MTGA) or Magic Online (MTGO). MTG Arena is free-to-play with the option of purchasing items (not necessary to play or compete). Magic Online is more for competitive players and requires the purchase of individual cards or decks to play.