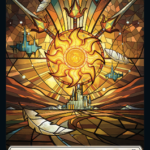 Wizards of the Coast is bringing back a fan-favorite booster fun treatment on Magic: The Gathering basic lands, and on a number of other cards,  in the upcoming Dominaria United set.

The global release of Dominaria United on Sept. 9 will officially kick off a year’s worth of content based around the set while celebrating the 30-year anniversary of Magic: The Gathering. WotC first introduced the booster fun stained glass treatment in the War of the Spark set that was released in 2019, with a number of the Japanese stain glass cards still worth a bunch of money on the secondary market.

That same MTG stain glass booster fun treatment will return with Dominaria United, showcased on basic lands in foil and non-foil, along with a number of other cards that have yet to get revealed.

WotC has yet to reveal how players can find the stain glass basic lands when the Dominaria United set releases. It’s likely at least one basic land with the treatment will get placed within collector booster packs,  and will potentially get included within set booster packs as well.

Multiple Dominaria United spoilers were dropped today in addition to the stained glass basic lands, as a teaser of what is to come starting on Aug. 18. Players can also expect a Jumpstart set to go along with the Dominaria release, officially replacing theme boosters packs. And two preconstructed Commander decks are also slated to release with the Standard-legal set.

Players can check out Dominaria United when it releases digitally on Sept. 1, along with tabletop prereleases. The global launch of the MTG set will begin on Sept. 9.