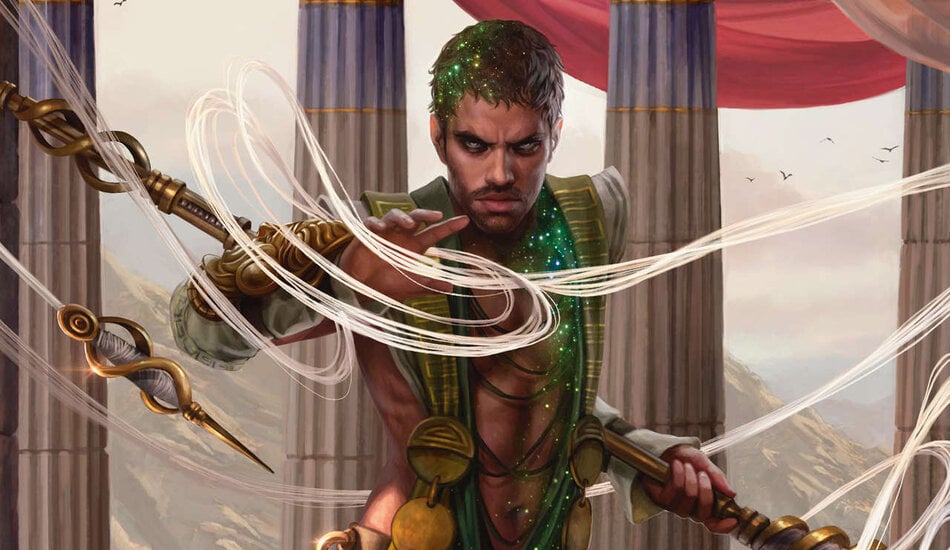 Returning to the Magic: The Gathering plane of Theros, there are a total of five planeswalkers within the Theros: Beyond Death set.

Unlike War of the Spark, the focus of Theros: Beyond Death (THB) isn’t on planeswalkers, but on Gods and Demi-Gods instead. The faces of the THB set are Elspeth and Ashiok, two returning planeswalkers. Both are also showcased in their respective Planeswalker Decks and are in the colors of Dimir and Mono-White. The final planeswalker, Calix, is new to Magic and is in Selesnya colors.

Elspeth was killed and betrayed by Helios but has returned in THB, wielding the same weapon that once took her life. She has two planeswalker cards, both in Mono-White.

Elspeth, Sun’s Nemesis is unique to MTG in that there are only negative loyalty abilities. She has a CMC of four, two White, and comes onto the battlefield with a loyalty counter of five.

Her minus-one ability is likely her best, powering up two target creatures until the end of turn. She also has a minus-two that creates two 1/1 tokens and a minus-three that provides five life points.

But the trick to maximizing Elspeth, Sun’s Nemesis is via the Escape mechanic. She can return to the battlefield from the graveyard any number of times as long as her Escape cost is paid.

Elspeth, Undaunted Hero is the Planeswalker Deck card. It has a CMC of five, three White, and has a focus toward the mechanic Devotion, rather than Escape. Elspeth’s Planeswalker Deck card fits a Mono-White strategy, applying +1/+1 counters with her plus-one loyalty and powering up all creatures based on Devotion with her ultimate.

A major downfall to Elspeth, Undaunted Hero is her minus-two ability, which searches your library for a card named Sunlit Hoplite. Unless playing an Aggro go-wide Mono-white strategy, Sunlit Hoplite isn’t strong enough to justify taking up space in a Constructed deck.

Ashiok is a planeswalker with an unknown gender who delights in spreading nightmares. Ashiok also has two planeswalker cards, both of which are Blue and Black.

Ashiok, Nightmare Muse fuels a Dimir-style mill deck. The trick is to keep Ashiok alive long enough to capitalize on its ultimate. Ashiok’s plus-one is weak when compared to the power levels of other THB creatures, but its minus-three may be useful in a self-mill strategy.

Ashiok’s minus-seven ultimate is powerful and it’s meant to work in conjunction with Ashiok’s plus-one, forcing an opponent to exile key cards. You can then play these cards at no cost with Ashiok’s ultimate and potentially win the game.

Ashiok, Sculptor of Fears is the Planeswalker Deck card, which is similar to Nightmare Muse but perhaps a tad more dangerous. Its plus-two loyalty counter is great for self-mill strategies and it’s minus-five allows a player to bypass a casting cost of powerful creatures.

The minus-11 ultimate on Ashiok, Sculptor of Fears is essentially the same as Mass Manipulation. But getting Ashiok to 11 loyalty counters isn’t an easy task.

Calix, Destiny’s Hand is a new planeswalker in the world of Magic. He’s designed in the colors of Green and White, both of which have a large number of enchantments in the THB set—and his plus-one is ideal for finding those enchantments early. Since Gods in THB are enchantment-creatures, his plus-one can be used to dig them out of your library, too.

The minus-three counter on Calix, Destiny’s Hand is essentially the same as Oblivion Ring. Enchantments that you control are used to exile an opponent’s creature or enchantment. His minus-three is a powerful tool in both THB Limited and Constructed gameplay.

But the true power of Calix is found in his ultimate. There are over 50 enchantments in the THB set, including Gods, that can be summoned back to the battlefield with Calix’s minus-seven counter.

Test out the returning and new planeswalkers found in Theros: Beyond Death when the set releases digitally on Jan. 16. The official release date of THB is on Jan. 24.