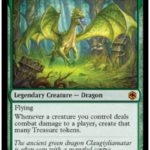 Prices for a number of Dungeons & Dragons: Adventures in the Forgotten Realms cards remain high following 2021 Standard rotation and the release of Innistrad: Midnight Hunt.

The Standard-legal MTG set was released on July 23, breaking Magic tradition by replacing the typical Core Set, while also breaking sales records. With ELD no longer legal within the Standard format, the meta opened up, providing an opportunity for a number of AFR cards to rise in price. Old Gnawbone still reigns while Lolth, Spider Queen has risen to the No. 2 spot.

The cards from AFR that are worth money are listed in descending order. Updates will take place with each new MTG Standard-legal set global launch and after major Magic tournaments.

From a spider queen and legendary dragons to a skeleton wizard, here’s every top MTG card worth money from AFR and which cards to keep an eye on.

Old Gnawbone was an AFR Limited bomb that also had an impact on the Commander format. The Legendary Flying 7/7 dragon was priced at around $25 prior to the global AFR release. And despite some fluctuations in price, Old Gnabone is valued at around $25 still following the global release of VOW.

Mono-Black control continues to remain just outside the top-tier Standard meta decks, heavily relying on Lolth, Spider Queen as a top-end planeswalker within the build. Despite a price decrease since the launch of AFR, the spider planeswalker will likely maintain her value and could increase in the coming months with the release of Kamigawa: Neon Dynasty.

Tiamat is a five-color Legendary dragon in AFR with a rarity of Mythic Rare. The five-headed dragon slotted right into a number of builds within the Commander format. Thanks to the finished Rare Dual land cycle in VOW and more Green mana dorks that can produce mana of any color, Tiamat has a slight presence in the Standard format as well.

Valued at around $12, Tiamat will likely maintain its value through the winter holidays and has the potential to rise in price over time.

Demilich is a unique Mythic Rare in the color Blue that’s found a home within multiple Magic formats. The skeleton wizard was priced at around $23 following the AFR digital release but dropped to around $10.50 prior to the fall rotation.

With the release of MID, Demilich became a staple in multiple Standard Constructed decks, rising almost 50 percent in value to around $22. The global launch of VOW hurt Demilich, however, dropping the wizard’s value to around $10 to $11.

Once worth less than $1, Ranger Class has crested the $10 threshold mark due to its use in Mono-Green Aggro Standard builds. The AFR Class peaked at around $14 but has fallen slightly since the release of VOW to around $10. Depending on the meta at the upcoming Innistrad Championship, Ranger Class could rise or fall in price.

The release of MID brought zombies back into the Standard meta, boosting the worth of Acererak the Archlich. Once valued at around $8, the Mythic Rare three-drop zombie wizard rose 22 percent between the digital and global launch of Midnight Hunt.

Acererak the Archlich is valued at around $10 and the zombie wizard has maintained its worth following the global launch of VOW.

The AFR cards to watch are ones that have fallen under the $10 mark but have the potential to rise in value once again.

A bomb in AFR Limited and a solid top-end card in other Magic formats, Inferno of the Star Mounts is a Mythic Rare six-drop. The dragon can’t be countered upon casting and was worth around $18 leading up to the AFR global launch.

Following Standard 2021 rotation, Inferno of the Star Mounts fell under $10. With the release of VOW, the dragon is priced at around $7 to $8.

Ramp in Green comes via Circle of Dreams Druid, a Rare 2/1 elf druid with a “Tap” ability that produces one Green mana for each creature you control. The elf druid was priced at around $18 but fell to around $8 with the release of MID.

At the time of the global launch of VOW, Circle of Dreams is valued at around $7. Despite multiple price drops since the elf druid’s release, Circle of Dreams has stabilized and could see a revival leading up to the release of Kamigawa: Neon Dynasty.