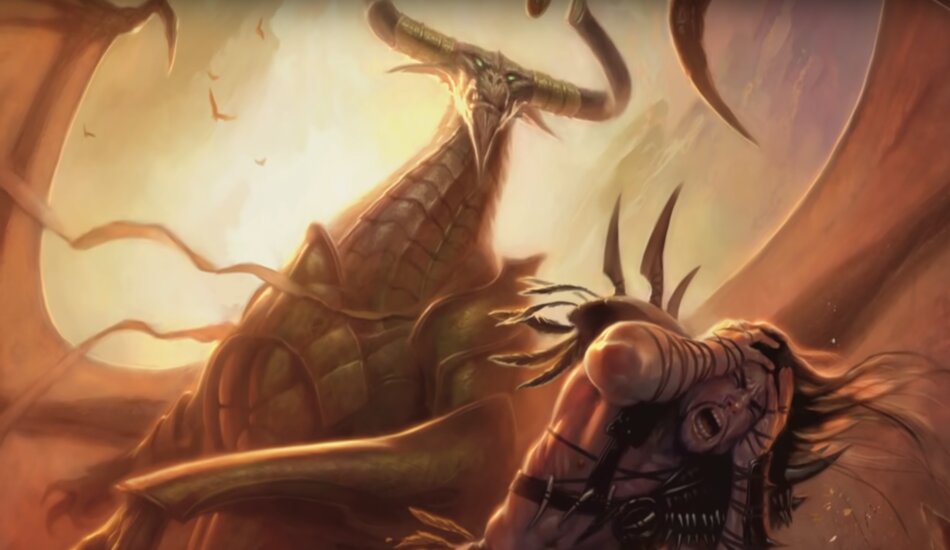 Lootcrate is featuring MTG Arena in their “Huzzah!” May gaming crate, along with several other franchises like The Elder Scrolls: Skyrim. What those items are, however, remains a mystery.

Sending random items of coolness to the front doors of nerds, geeks, and sports fanatics is what Lootcrate is all about. Offering over 20 themed crates, Magic: The Gathering has joined forces with a special MTG Arena item for May’s gaming-themed crate.

Also featured in May’s gaming Lootcrate are The Elder Scrolls: Skyrim, D&D, a Trover Saves the Universe poster, and other items. The overall theme for the crate is medieval fantasy games.

There’s a picture on Lootcrate’s site with a dragon who looks like Nicol Bolas, but until the crates are sent out, the items are supposed to remain a mystery. Items can include t-shirts, Pop!’s, collectible statues, stickers, codes, and other various items. Each crate contains four to six items.

This isn’t the first time Magic: The Gathering has partnered with outside sources to promote and won’t be the last. MTG Arena is a hot commodity for Wizards of the Coast and Hasbro, helping to drive profits in their quarterly sales report.

With the recent release of MTG War of the Spark expansion, the hype is at an all-time high for the game (digitally and in card form). Numbers are up at Friday Night Magic: The Gathering tournaments and hit record digits during pre-release of War of the Spark.

Likewise, on MTG Arena, hundreds of thousands of gamers play matches every day. Either in constructed best of one and best of three matches, or in Limited draft and sealed.

The Lootcrate May “Huzzah!” gaming crate run ends on May 26.