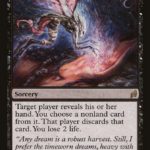 Outside of the famous Magic: The Gathering Reserve List, there’s an abundance of cards that are worth several hundred to over a thousand dollars.

Not all MTG cards worth money are on the Reserve List. Recent prints like Ragavan, Nimble Pilferer from Modern Horizons 2 are worth around $100 and older cards that have received multiple reprints throughout the years are valued anywhere from $100 to over a thousand dollars. Many of the older MTG cards are lands, but there are also foil versions of Artifacts, Enchantments, and even creatures worth several hundred dollars on the market today.

From MTG Dual-lands to a powerful Blue planeswalker, here are 15 Magic cards worth money not on the Reserve List, according to MTGGoldfish and MTGStocks.

From the Invasion block to Ixalan, the Onslaught set contains the most MTG foil cards worth money to date. Released in 2002, the set featured a tribal theme and had a total of 350 cards within it. Peaking at top value are five lands from the set that allowed players to tap and pay one life in order to fetch a basic land type.

Once priced at over $3,000, the Polluted Delta (Island and Swamp) foil Onslaught land card is valued at around $1,900.

Once priced as low as $230, the foil Forest and Plains Windswept Heath land from Onslaught is now valued at around $900.

Bloodstained Mire, a Swamp, and Mountain foil land from Onslaught once held a steady price point of around $1,000. It dropped in 2021 and is now valued at around $927.

Played in Modern and Vintage MTG decks, Tarmogoyf is a creature from Future Sight whose power is equal to the number of card types within all graveyards and toughness that is equal to that number, plus one. The foil version from Future Sight has been on a slight decline since Oct. 2021 in price but is still valued at around $588.

Played a variety of MTG Commander decks, Phyrexian Altar is an Artifact that allows players to sacrifice a creature to add one mana of any color. Once priced at $750 during 2021, the foil Invasion version of Phyrexian Altar is now valued at around $540.

Played in multiple MTG formats and considered one of the best Mono-Blue planeswalkers, Jace, the Mind Sculptor has been reprinted several times over the years. The Gatewatch planeswalker’s foil version from Worldwake has mostly maintained its value over the years, though, valued at around $481.

Reprinted many times since Dissension, Hallowed Fountain is a Plains and Island Dual-land that can enter the battlefield untapped if its controller pays two life. It is worth the most out of all the other Dual-lands from the Dissension set, with its foil version priced at around $475.

Phyrexian Arena is a Mono-Black Enchantment that draws a card at the beginning of your upkeep at the cost of one life. Often played in Commander builds, the foil version from Apocalypse is valued at around $438.

Oboro, Palace in the Clouds

Oboro, Palace in the Clouds is a legendary land that can tap for one Blue mana or return to its owner’s hand at the cost of one colorless mana. Often played in the MTG Commander and Modern formats, the Saviors of Kamigawa foil version is valued at around $416.

Deserted Temple from Odyssey can tap to provide one colorless mana or can untap a target land via the cost of paying one mana of any color and tapping it. Played primarily in Commander decks, the foil Odyssey version of Deserted Temple is valued at around $388.

Played in Commander, Modern, Legacy, and Pioneer MTG formats, Thoughtseize is a Sorcery speed spell that only costs one Black mana to cast. It forces an opponent to reveal their hand while you choose a non-land permanent to discard from their hand and you lose two life. Despite getting reprinted multiple times over the years, the Lorwyn foil version is valued at around $344.