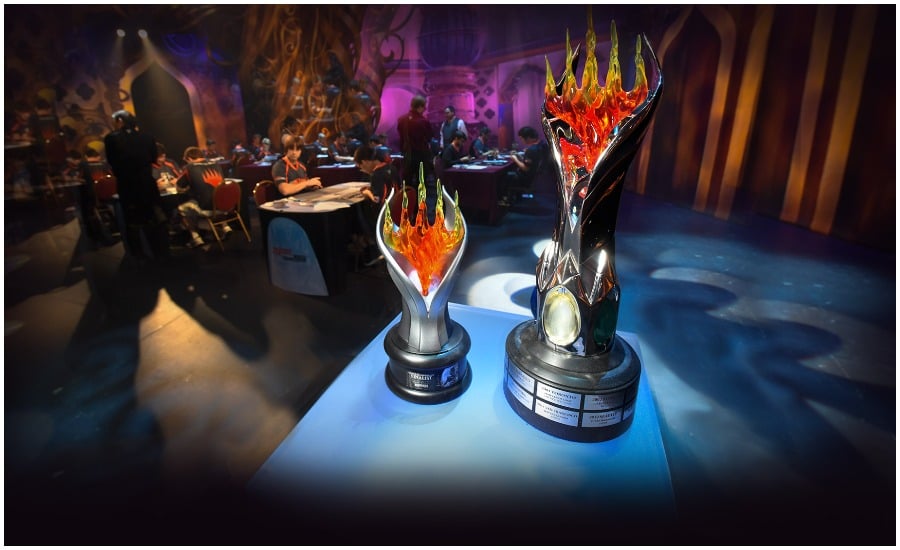 Whether it’s Draft or Sealed, Limited is a core part of the overall Magic: The Gathering experience. A player visiting a game store for the first time is most likely to have their first organized play experience be a Friday Night Magic draft of the most recent set.

From normal expansions like Kaldheim to premium products like Modern Horizons, Magic sets are crafted with a fun and balanced Limited environment at the forefront. Despite the importance of Limited within the Magic ecosystem, the format has been largely absent from high-level Magic competition over the past year.

Draft and Sealed have a home in Magic Online but are missing in Magic Arena-based events. As Limited was put to the side, Standard and Historic became the premier formats for Arena players looking to qualify and compete at the highest level. Mythic-rank Limited players can earn a spot in qualifiers but ultimately end up playing a Constructed format.

For Rivals League player Ben Stark, this is a disappointing trend. Stark built his name in Limited and thinks the format should be showcased at the highest level once again.

“With the paper cards and cameras, the way coverage used to work for Limited was hard to follow because there are so many more cards that are played, whereas Standard you see the same cards over and over again,” Stark told Dot Esports.

With the evolution of Twitch as a platform and stream overlays, Stark said it should be easier to follow a draft to make it palatable for a spectator. Viewers could hover over a card and read its text and a spectator mode would make viewing a draft easier than ever.

Limited has a high barrier of entry that can lead some viewers to be left in the dark. While many players are familiar with Draft at their local game store, fewer understand it deeply. The difference between one draft and 10 drafts is substantial.

Ethan Saks, the host of the Lords of Limited podcast, said the tournament-viewing experience has been lackluster because of the difficulty in telling a narrative and helping viewers understand what they’re seeing.

“[Drafts] are hard to follow,” Saks told Dot Esports. “If you know the art then you know what the card does. If you don’t, it’s going to be hard to follow. I think this is partially why even before the pandemic they were moving away from doing Limited coverage. It wasn’t popular.”

For those who play and watch Limited, these barriers are worth overcoming to experience Magic in its purest form—where each card in an expansion has an application and every game presents a unique challenge.

A new game every time

Every game of Limited is different. When players open up their 15-card booster pack, they need to evaluate the cards in real time and build their deck piece by piece. This is a large part of how skill is expressed in Limited. The patchwork nature of Limited deck construction adds an additional layer of complexity and creativity.

Limited is generally a slower format without the consistency and average card power level of Constructed. Draft and Sealed rely more on maximizing Commons, Uncommons, and one or two key Rares in a matchup. There’s generally more meaningful combat steps and tighter gameplay is rewarded.

This difference defines Limited. Each experience is unique, even if there’s an established meta. In Kaldheim, Snow decks are powerful. Similar to how Standard goes through frequent metagame shifts, Limited formats will often do the same.

Kaldheim underwent small shifts through its life cycle. Snow is the best archetype. At the beginning of the format, players that prioritized Snow lands early in the draft set themselves up for success. Most players didn’t understand that Snow lands should be taken earlier and more often in Kaldheim.

As the format evolved and people caught on and started prioritizing Snow lands, Saks didn’t draft the Snow archetype as aggressively.

“Everything is getting split up so there’s not one person with the stacked four-color Snow deck because the resources are getting split,” Saks said. “Three weeks ago, in every draft, I wanted to draft Snow. I’d take all the Snow lands because no one knew what they were doing.”

Understanding what archetypes are good, while keeping a keen eye on the changing tide of the Limited environment, means a more knowledgeable player will have an advantage. A player who realizes Ravenous Lindwurm is generally overperforming will have the advantage.

Carvalho and Stark have played hundreds of drafts to prepare for major tournaments. Discovering the subtle synergies and finding out what cards are effective drives Limited competition.

“You figure things like that out by testing and talking to other good people,” Stark said. “We would have discussions on what’s working, what’s not, which cards seem to be underperforming and overperforming.”

This presents a completely different feel at major tournaments. When there are split-format tournaments, like the Magic Online Championship Series, viewers get an idea of the complete skills of Magic pros.

“If I play better than my opponent in Limited, I think I have a 20 percent edge, maybe more,” Carvalho said. “It seems like it’s very hard to lose in Limited if you are way better than your opponent and know what you’re doing. Not so much in Standard or Modern.”

Limited is starting to make a dent in the Arena competitive scene after a quiet 2020. The March Strixhaven Qualifier Weekend was played with Kaldheim Sealed. The Qualifier Weekend and February Arena Open were met with near-unanimous praise from a community that craves high-stakes Limited action on Arena.

The format was chosen as Sealed instead of Draft due to the difficulty of holding eight-player pods in a large-scale open event. Sealed is easier to implement, but for many players, it was an appetizer for when Draft is finally offered in a competitive Arena event.

Sealed decks are reliant on getting a good pool from the six packs. Stark said Draft is more skillful and fun because, for good drafters, it’s less reliant on luck and more based on flexibility and card evaluation.

“If you’re a good drafter and you’re willing to switch and figure out what people around you are drafting, you should almost never have a train wreck,” Stark said. “It can happen, but it’s more like one in 20 decks. It’s pretty rare.”

As Limited becomes more prominent in Arena events, some Magic Pro League and Rivals League members—like Carvalho and Stark—are receptive to the possibility of League Weekend’s being split format.

“I saw all the tweets about the Arena Open and I know everyone loved it,” Carvalho said. “I’m pretty sure everyone in the league would be excited if there were two or three drafts on weekends. I think the public would be excited about it too.”