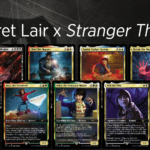 A total of seven Magic: The Gathering Secret Lair drops and three bundles were revealed today by Wizards of the Coast.

Releasing Oct. 18, the MTG 2021 Secret Lair Superdrop contains a wide variety of card styles from classic horror movies to the anatomy of Magic monsters. All drops are available in foil and non-foil versions. Read the Fine Print showcasing Liliana and her contracted demons is the only exception, containing an etched foil version. Free shipping is available for orders within the United States that are over $99.

From Mirrodin lands and Midnight Hunt Showcase styles to cards that look like a monster movie poster and a Stranger Things drop, here’s every October MTG Secret Lair box that is available here.

Five borderless artifact lands from Mirrodin are featured within the Mirrodinsanity drop, illustrated by DXTR. The lands included are Ancient Den, Seat of the Synod, Vault of Whispers, Great Furnace, and Tree of Tales. Each of the lands was hand-painted in a pixel-art style.

The Monster Movie Marathon MTG Secret Lair drop includes a total of four borderless cards illustrated by Martin Ansin: Beast Within, Blasphemous Act, Dismember, and Grafdigger’s Cage. Stats and text are worked into the hand-drawn art, unlike any Magic card that’s been printed. A non-foil version is $29.99 and the foil one is priced at $39.99.

Thrilling Tales of the Undead

Highlighting a horror movie theme, there are three hand-drawn cards in the Thrilling Tales of the Undead MTG Secret Lair drop. The three cards illustrated by Fay Dalton are Gravecrawler, Liliana, Death’s Majesty, and Rise of the Dark Realms.

Illustrated by Timba Smits, Monster Anatomy contains a total of five borderless cards highlighting what is inside of them. The five MTG cards within the Secret Lair drop are Fleet Swallower, Goblin Thrashmaster, Ilharg, the Raze-Boar, Protean Hulk, and Gishath, Sun’s Avatar.

Read the Fine Print is a Secret Lair drop that showcases the four demons Liliana had a contract with, along with her Enchantment card. Illustrated by ZIUK, the four demons are Demonlord Belzenlok, Griselbrand, Kothophed, Soul Hoarder, and Razaketh, the Foulblooded. Also included is Liliana’s Contract.

There are a total of eight cards and one token in the Stanger Things drop. All cards will have a Magic equivalent that will release with the New Capenna set. These cards are contained in set boosters via The List.

All screengrabs via WotC, Magic: The Gathering Twitch channel.