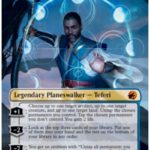 A return to the plane of Innistrad in Magic: The Gathering will showcase a total of three planeswalkers, each containing unique loyalty abilities that will find a home in a variety of formats.

Scheduled to release digitally on Sept. 16 and globally on Sept. 24, the Innistrad: Midnight Hunt (MID) set will contain the planeswalkers Arlinn, the Pack’s Hope, Wrenn and Seven, and Teferi, Who Slows the Sunset. Arlinn and Teferi are both dual-color four-drops while Wrenn is a five-drop Mono-Green planeswalker.

From the new MID mechanic Daybound/Nightbound to permanents getting untapped, here are the planeswalkers of Innistrad: Midnight Hunt.

Teferi, Who Slows the Sunset

Recent Teferi planeswalker cards in Magic earned the time mage a bad rap. The MID version offers players a solid UW planeswalker that isn’t too overpowered but still contains the flavor of what Teferi does.

Tapping permanents you don’t control can take an opponent’s blocker out of commission or prevent them from casting an Instant spell if they were holding mana up. Any permanents tapped will automatically untap during your opponent’s turn. Untapping your own permanents has its advantages too, especially prior to your end step.

Teferi’s minus-two ability is pretty standard for the planeswalker, allowing players to dig into their library and find a card they need. But his ultimate minus-seven is powerful, providing Vigilance to all permanents and card draw on an opponent’s turn. In a Control/Midrange build, Teferi, Who Slows the Sunset has a good amount of potential.

The planeswalker Arlinn is the face of MID, synergizing with werewolves while also showcasing the new Daybound and Nightbound mechanic. Arlinn, The Pack’s Hope is a Double-Face planeswalker card in which her loyalty abilities are different depending on whether it’s day or night.

All players within the game can control whether it’s day or night, leading to unique strategies. The most powerful ability Arlinn seems to have is with Moon’s Fury, turning into a 5/5 Werewolf creature with Trample, Indestructible, and Haste. You can turn day into night by using Arlinn, The Pack’s Hope minus-three, creating two 2/2 wolves for protection without casting any spells.

But your opponent can return it to day by simply casting two spells on their turn, preventing you from using Arlinn. The Moon’s Fury zero-cost loyalty ability. Whether it’s day or night on your turn will determine which side of Arlinn is face-up upon casting.

Players shouldn’t underestimate Arlinn, The Packs’s Hope plus-one ability. Providing all creature spells with Flash is powerful in a creature-heavy build, while the +1/+1 counter is a nice bonus. Casting spells during your opponent’s turn, however, won’t affect whether it’s day or night on your turn.

Six has officially retired within the woods of the plane Innistrad, leaving Wrenn to find herself a new tree. Wrenn and Seven are likely the most versatile of the three planeswalkers with a total of five abilities, synergizing well with the Landfall mechanic from Zendikar Rising.

See Wrenn and Seven on Amazon

The most versatile and possibly best ability Wrenn and Seven has is their minus-three, creating a token creature with Reach that has power and defense equal to the number of lands you control. It’s similar to Beanstalk Giant, an ELD card rotating out with the release of MID, which saw a good amount of gameplay in Standard Green decks.

Landfall is a powerful mechanic that can take advantage of Wrenn and Seven’s first two loyalty abilities. In the Standard format, there are cards like Brushfire Elemental, Kazandu Mammoth, Lotus Cobra, and Valakut Exploration that will synergize nicely with Wrenn and Seven.

Wrenn and Seven also self-mills permanents that aren’t basic lands, synergizing with reanimation and graveyard matters builds. Get the MID planeswalker to eight loyalty counters and its controller can return all permanents to hand without a hand size limitation, potentially ending the game within specific deck builds.