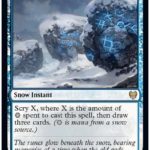 Players in Magic: The Gathering prepare for winter with a cycle of Rare Instant and Sorcery speed cards within the upcoming Kaldheim set.

Snow is a unique Magic supertype, in that it doesn’t have an individual function on its own. Within the KHM set, there are at least 15 cards that have Snow as a supertype.

The downfall to Snow, however, is that it’s a theme. And with all themes in MTG, there are hate cards designed to thwart that theme, like Reidane, God of Justice. The number of Snow hate cards printed in KHM is low, providing the cycle of Rare Instant and Sorcery spells a chance to thrive within multiple Magic formats.

Search for Glory is a tutor that slots nicely into legendary themed builds within KHM and decks running multiple sagas. It’s a Sorcery speed spell but makes up for that by only costing three mana to cast. Search for Glory will get played in Commander and likely Standard too, due to the number of legendary and saga cards within KHM.

Similar to Ugin’s Insight and Precognitive Perception, Graven Lore might see gameplay (whereas the others didn’t), due to it being an Instant. Graven Lore has potential in a Standard or Commander Control build and could possibly even get played in Limited. Casting at Sorcery speed for the aforementioned cards was a huge drawback but at Instant speed, Graven Lore becomes sideboard worthy and may even a main deck card, depending on the meta.

Blood on the Snow

Six mana to board wipe creatures or planeswalkers isn’t a card to write home about. Blood on the Snow isn’t just a board wipe Sorcery speed spell, though, as it has an additional ability that retrieves a creature or planeswalker from the graveyard. Blood on the Snow is a solid Commander card that will also see play in Limited, and maybe even Standard.

Four damage dealt towards a creature or planeswalker for a cost of three is a solid stat within the Limited format. Tundra Fumarole might have potential in other Magic formats too, producing colorless mana for each Snow spent to cast a spell, in which the colorless mana is actually Snow mana because it was produced by a Snow source. This additional Snow mana can trigger other Snow abilities or even be used to pay a Foretell or Kicker cost.

Blessings of Frost ideally slots into a Selesnya counter Commander build and could possibly find a home within a Mono-Green stompy Standard deck. Shifting counters around is solid in Selesnya decks. Spending four mana to shift counters is expensive, though. Blessing of Frost’s is worth playing in select builds due to being able to draw a card for every creature that has a power of four or greater on the battlefield.