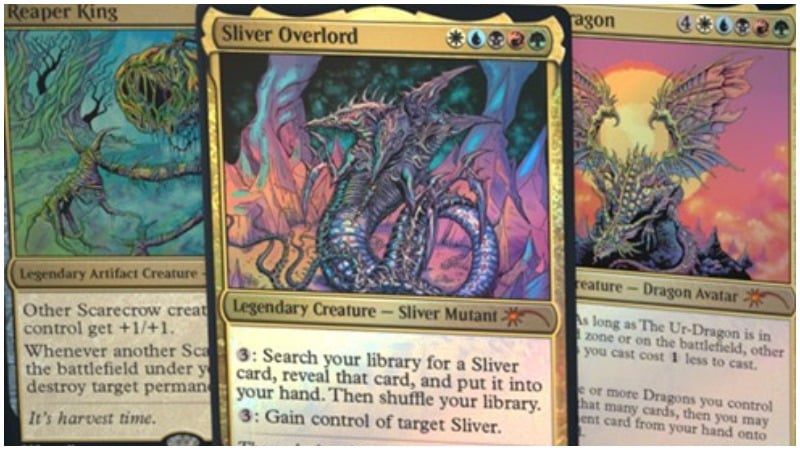 Some of the most popular cards in Magic: The Gathering have received an alternative-art makeover in the new Secret Lair drop series.

Set to release in 24-hour windows from Dec. 2 to 9, the Secret Lair series contains seven sub-themed mini-reprinted sets with never-before-seen artwork. A bundle of all the sets is also available. Each sub-theme focuses on a particular aspect of Magic, from Commander cards to cats. And all the cards are legal for competitive play in their respective formats.

Secret Lair is only available for a short time using a new purchase system called timeboxed to demand. Each drop also includes codes to cards in Magic Online and card sleeves in MTG Arena. Secret Lair is an ideal holiday gift for any serious Magic player and collector.

Here are every theme and card in the Secret Lair drop series ranked from worst to best.

Containing the edgiest artwork of all the Secret Lair drops, Seeing Visions is a visual trip. The set contains four alt-art versions of the Magic card Seeing Visions, showcasing artwork from popular artists in pop-culture.

And while the art is stunning, Seeing Visions isn’t a sought-after card by MTG players. Unless specifically requested, avoid buying this Secret Lair drop. Seeing Visions goes on sale for 24 hours starting on Dec. 6 and is priced at $29.99.

The Eldraine Wonderland drop in Secret Lair features Snow Lands. And while every Magic player enjoys alt-art lands, the value of this drop is a tad shy of its purchase price. But for the player who enjoys blinged lands, Eldraine Wonderland could be the ideal holiday gift.

If you like Goblins in MTG, then Explosion Sounds is the drop you want. This Secret Lair drop features a crack-goblin crew who rely on explosions to solve every problem in Magic. And they form a panorama.

Bitterblossom is one of the most popular faerie cards in Magic. The reprint value of it in Secret Lair is below the purchase price. But that could change over time. The Bitterblossom Dreams drop includes one alt-art Bitterblossom and four alt-art tokens. They aren’t foil cards, though.

The Bitterblossom Dreams Secret Lair drop begins on Dec. 3 for 24 hours and is priced at $29.99.

As a dog lover, it was hard to put OMG Kitties! in the second-ranked spot. But let’s be real, they’re super adorable. The Secret Lair drop contains five alt-art foil cat-themed MTG cards and two tokens. Artwork for this drop was created by Andrea Radeck, Erica Williams, Jakob Eirich, and Allison Carl.

The artwork was created by comic book artist Justine Jones and goes on sale for 24 hours beginning Dec. 8. The Kaleidoscope Killers drop is priced at $39.99.