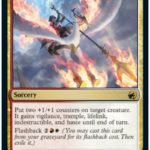 Magic: The Gathering‘s upcoming Innistrad: Midnight Hunt set is packed with solid Rare and Mythic Rare cards, but only eight make the cut as first picks within Limited Draft.

The first pick in Limited Draft should encourage you to build around that card and its Magic colors. There’s an abundance of Rare and Mythic Rare multicolor Innistrad: Midnight Hunt (MID) cards that don’t make the Limited Draft cut, while a handful of cards have earned an honorable mention due to being playable within a specific archetype.

Teferi, Who Slows the Sunset is a solid planeswalker that isn’t a build-around first pick, while Ghoulcaller’s Harvest is a possible splash in UG or UB. Slogurk, the Overslime is a solid creature that synergizes with self-mill. And Rem Karolus, Stalwart Slayer is a strong creature within RW Aggro builds.

From vampires and angels to humans and werewolves, here are the eight best multicolor Rare or Mythic Rare MID cards to pick first within Limited Draft in ascending order.

A three-drop 3/3 with First Strike is a strong card worth picking first in Draft. Florian, Voldaren Scion adds value to his stats by synergizing with the BR theme of opponents losing life, prompting card advantage during the late game. Vampires don’t appear to be a powerful archetype in MID, but Florian, Voldaren Scion is a first pick worth taking with the option to splash.

The colors Red and White don’t have a solid archetype to build around but contain a number of powerful beatdown cards like Angelfire Ignition. The Rare spell pumps a target creature with two +1/+1 counters, along with keywords Vigilance, Trample, Lifelink, Indestructible, and Haste until the end of turn.

Angelfire Ignition essentially turns a creature into an overpowered Questing Beast for only three mana. And as a bonus, it has a reasonable Flashback cost of 2RW. Both White and Red have solid creatures to build around, making Angelfire Ignition a solid first pick.

Dennick, Pious Apprentice slots right into the theme of self-mill and the MID mechanic Disturb. The human soldier is a two-drop 2/3 with Lifelink that also prevents cards within graveyards from getting targeted by spells and abilities.

Should Dennick, Pious Apprentice die or get milled, it has a four-drop Disturb cost that returns it to the battlefield as Dennick, Pious Apparition, a 3/2 spirit with Flying. The legendary creature also creates a Clue Artifact via Investigate whenever one or more creature cards are put into any graveyard. The ability only activates once per turn, however.

Synergizing with everything RG wants to do in MID Limited, Arlinn, the Pack’s Hope supports Daybound and Nightbound by giving all creatures Flash until your next turn. They also get a +1/+1 counter as a bonus. Arlinn protects even protects herself with a minus-three that creates two 2/2 wolf tokens.

And when the iconic planeswalker transforms into Arlinn, the Moon’s Fury with a zero cost loyalty that makes her a 5/5 with Trample, Indestructible, and Haste.

The Green and White archetype in MID Limited supports the new Coven mechanic while providing a solid number of decent stated humans for a go-wide strategy. Katilda, Dawnhart Prime is a two-drop 1/1 (baseline stats synergizing with Coven) mana dork with a mana sink ability that pumps a creature +1/+1. She also has protection from werewolves, which is pure flavor, and may impact the MID Draft meta.

Sigarda, Champion of Light is another first pick for GW, providing powerful late-game stats with a passive that pumps all humans +1/+1. Keywords like Flying and Trample make the 4/4 angel a very real threat. And she also has Coven, providing late-game card advantage by digging three deep into your library for a human creature.

Werewolf builds in RG have another first pick option via Tovolar, Dire Overlord. The legendary creature bypasses the Daybound/Nightbound mechanic, flipping all werewolves if three or more are on the battlefield. He also draws a card for each werewolf that does damage to a player.

Upon flipping, the human werewolf becomes Tovolar, the Midnight Scourge, beefing his stats up to 4/4. His passive still draws a card for each werewolf that damages a player and has a mana sink that can pump a specific wolf’s power while giving them Trample until the end of the turn.

Liesa, Forgotten Archangel is a solid top-end finisher in WB decks with 4/5 stats and the keywords Flying and Lifelink. Her ability can target your own creature, synergizing with Rite of Oblivion to return a creature to your hand. The legendary angel also exiles any of your opponent’s creatures when they die, dismantling any graveyard shenanigan strategies.

Players can test out their Draft skills with the digital release of MID, scheduled to take place via Magic Online and MTG Arena on Sept.16. Prerelease events (MID Limited Sealed) start on Sept. 17, and the global launch is scheduled for Sept. 24.