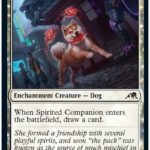 The color White in Kamigawa: Neon Dynasty contains a large number of Common and Uncommon-rarity cards worth playing in the Magic: The Gathering Limited format.

There are a number of exciting and unique Kamigawa: Neon Dynasty (NEO) Limited archetypes. The color White slots into four of the possible 10 and can get splashed in other archetypes like Blue/Black rogues/ninjas or Red/Green Modifications matter builds.

Potentially becoming one of the best NEO Commons in White is Imperial Oath, synergizing with the RW archetype. Providing modal value as a one-drop Instant is Light the Way. And the Enchantment Born to Drive has the potential to scale nicely within the UW archetype while having the option to create a pilot token via the MTG mechanic Channel.

Other honorable mentions include the saga Michiko’s Reign of Truth, the shrine Go-Shintai of Shared Purpose, Golden-Tail Disciple with Lifelink on a Common, Mothrider Patrol as a solid one-drop that can tap creatures later in a game, and Norika Yamazaki, the Poet as a samurai with Vigilance.

From loyal dogs and a fox ninja to samurai and Enchantments, here are the 10 best NEO Common and Uncommon MTG cards in the color White.

Synergizing with the GW and WB archetypes, Spirited Companion is a solid Draft pick in any deck playing or splashing the MTG color White. The loyal dog’s stats aren’t the best but it does draw a card for only two mana. Card advantage is huge within the Limited format, especially when it only costs two mana and comes with a creature that can chump block in the color White.

Imperial Oath is a solid top-end NEO card in the MTG color White that is a six-drop Sorcery speed spell. The spell floods the battlefield with three 2/2 samurai tokens that have Vigilance, providing a go-wide board state that slows down Midrange and Aggro Limited builds. Imperial Oath also provides card advantage via a Scry of three, letting you filter out basic lands you don’t need in the late game while finding key cards that synergize with your NEO Limited deck to end games.

Eiganjo Exemplar is a top Draft pick in the RW Warriors and samurais archetype. The Enchantment creature has a rarity of Common, making multiple copies in a Limited build a good possibility. Eiganjo Exemplar synergizes with other powerful White warriors/samurais like Imperial Subduer and Norika Yamazaki, the Poet. And the human samurai’s ability applies to itself should a player choose to attack with Eiganjo Exemplar on turn three.

Also supporting the Red and White NEO archetype is Selfless Samurai. The two-drop can provide Lifelink to warriors and samurais that attack alone or sacrifice itself to provide Indestructible to another creature until the end of a turn. Lifelink, much like card draw, provides a bunch of value within the MTG Limited format, and a creature gaining Indestructible can easily swing the advantage of a game.

Supporting the UW vehicles archetype is Hotshot Mechanic. The fox pilot stands out as a one-drop 2/1 Artifact creature that can slot into the WB archetype as a solid early-game creature. And as a bonus, it crews vehicles as though its power were two greater, synergizing with the Blue and White NEO archetype. Hotshot Mechanic is not a top NEO Draft pick but a good grab around turn five or six if running one or two vehicles.

Banishing Slash is a Mono-White Sorcery speed spell that can destroy any tapped Artifact, Enchantment, or creature. Costing two White mana and having Sorcery speed is a slight downside, along with the specifications required to enact its second ability. Getting a 2/2 token with Vigilance while taking out a threat that was tapped for only two mana makes it worth grabbing Banishing Slash, though, especially when building a Black and White NEO Limited build.

Blade-Blizzard Kitsune is a three-drop 2/2 ninja that has Double Strike and Ninjutsu. Players can splash it into the UB rogues/ninjas NEO archetype. But the fox ninja has a ton of potential within the UW archetype via evasive vehicles and creatures like High-Speed Hoverbike, Dragonfly Suit, and Mothrider Patrol. Blade-Blizzard Kitsune can also sneak in for a Double Strike attack in the WB archetype via Inkrise Infiltrator, Gravelighter, and Searchlight Companion.

Hardly a pack one first pick in NEO Draft, Sunblade Samurai is a solid mid-pack pick that can slot into any of the MTG Limited archetypes running the color White. The human samurai has 4/4 base stats and Vigilance, providing decent value during the later stages of a game as a five-drop. During the early game, Sunblade Samurai has amazing value via Channel—able to search up a basic Plains land card while also providing two life, potentially allowing players to cut a land in their overall NEO Limited build. 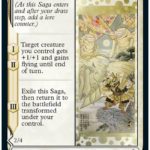 A majority of NEO Dual-Faced sagas are either too slow or lack an overall value. Befriending the Moths bucks that trend by pumping creatures with +1/+1 stats and Flying until the end of turn via chapters one and two. The value continues via chapter three with Imperial Moth, a flyer with four toughness that can block most Flying creatures an opponent might have. Befriending the Moths slots nicely into the RW archetype and has synergy with Blade-Blizzard Kitsune.

Synergizing with the GW and WB archetypes and any build running the color White, Intercessor’s Arrest is an upgraded Pacifism. It prevents permanents from attacking or blocking, while also preventing that permanent from crewing a vehicle. Intercessor’s Arrest also prevents abilities from getting activated unless they’re mana abilities, a solid ability within the NEO Limited format.

Update Feb. 14 4am CT: The article was updated following the digital launch of NEO via MTG Arena.