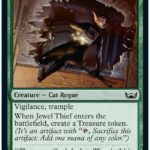 The Magic: The Gathering color Green within the Streets of New Capenna Limited format contains a solid number of creatures that synergize with Aggro and creature-heavy themes.

Green within the Streets of New Capenna (SNC) Limited format is found within the Riveteers and Cabretti factions, two three-color archetypes that promote creature-heavy builds. The MTG color synergizes with citizen tribal, found in the colors White and Green, supporting go-wide strategies. And the color Green contains spells that can produce Treasure tokens, providing mana fixing for multicolor archetypes while also synergizing with the Alliance SNC mechanic.

In addition to drafting the best Green Common and Uncommon rarity cards within a New Capenna Limited Draft, there are several honorable mentions players should keep an eye out for. There are plenty of creatures with Flying, making High-Rise Sawjack a good one-of to have on standby within your sideboard. Most Wanted and Prizefight are two solid Instant speed spells that can eliminate threats while also producing Treasure tokens. And Attended Socialite is the bread and butter Green Common that can scale in power via the SNC Alliance mechanic.

Here are the best Green Limited Common and Uncommon rarity cards to play within the New Capenna Limited Draft format.

Jewel Thief is one of the best Common rarity cards for the New Capenna Limited Draft format within the SNC set. The cat rogue has baseline stats of 3/3 as a three-drop with the MTG keywords Vigilance and Trample. And if that wasn’t enough, when Jewel Thief enters the battlefield, it creates a Treasure Token.

Vehicles aren’t typically good within a Limited format, but the SNC Common Capenna Express has potential. Due to the abundance of Treasure tokens—38 in total within the MTG colors White, Green, and Red—Capenna Express can turn into a 6/6 Artifact creature until the end of the turn by simply sacrificing a Treasure token.

The Alliance mechanic has the potential to be one of the stronger New Capenna Limited mechanics, especially within the MTG colors White, Red, and Green. Elegant Entourage is a 4/4 four-drop with a rarity of Uncommon that will add a +1/+1 counter to another target creature upon entering the battlefield while also granting it Trample until the end of the turn.

Venom Connoisseur stands out as a New Capenna Limited two-drop with an Uncommon rarity due to her ability. On the surface, the human druid is a bland 2/2. But with Alliance, Venom Connoisseur gains Deathtouch, and if a second creature is cast that turn, all creatures gain Deathtouch until the end of the turn. The human druid slots ideally into aggressive decks that want to go wide with tokens and a bunch of cheap creatures.

With a rarity of Common, Cabaretti Initiate is a solid one-drop that gains additional value via its hybrid mana ability during later stages of a New Capenna Limited game. The raccoon is a citizen, synergizing with the anthem Take to the Streets, that gains the MTG keyword Double Strike upon paying a total of three mana until the end of the turn.

Freelance Muscle is a solid top-end finisher within the New Capenna Draft Limited format in that it can potentially scale in power and defense. In conjunction with counters and combat tricks, Freelance Muscle can get quite large when it blocks or when the rhino warrior attacks, providing a good amount of value during the late-game stages of a match.

A five-mana 2/3 creature that can add two +1/+1 counters to any target creature is not a top pick. But Caldaia Strongarm has potential within the New Capenna Limited Draft format due to having Blitz. The human warrior can put the counters on itself, becoming a 4/5 creature with Haste that draws a card. It also synergizes with sacrifice themes, should you choose to put those counters on another creature instead.

Take to the Streets