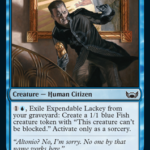 Blue is shaping up to be a key color in Streets of New Capenna Limited and helps fuel counters, sacrifice, and Connive strategies.

New Capenna Limited focuses on five three-color archetypes. Blue is a part of Obscura, Maestros, and Brokers. This means that, like most Magic: The Gathering sets, Blue fulfills a utility role that controls the game and paves the way for engines or bombs to take over the game.

Obscura is centered around the Connive mechanic, an effective way to draw cards and put counters on Creatures. This feeds into the many counters synergies found in Brokers cards. These two archetypes fit together well.

Maestros focuses on sacrificing Creatures for value with Casualty and playing out of the graveyard. It works well with Obscura, but Brokers cards aren’t the best fit because of shield counters incentivizing playing to the battlefield.

Here are the best Blue Limited Common and Uncommon rarity cards to play within the New Capenna Limited Draft and Sealed formats.

Connive is a strong mechanic that fuels several different archetypes in New Capenna Limited. Echo Inspector is a strong four-drop Flying threat that connives when it enters the battlefield. It generally will become a 3/4 since discarding a nonland card is beneficial in New Capenna. This fits great in any Obscura or Maestros list that needs a good Creature at Common.

A Little Chat is a fantastic option for Blue decks looking for card draw. For the two mana investment, it lets you look at the top two cards and put one in your hand. What makes A Little Chat powerful is the Casualty 1 condition. This copies the spell and lets you look four cards deep. In Limited, this will help find answers and minimize mana flood or screw.

Run Out of Town

Maestros and Obscura will have better options for removal, but in a Brokers list Run Out of Town is a solid option. This can bounce any nonland permanent and it goes either on top or bottom of the opponent’s library. If they put it on top, that blanks their next draw step and makes them replay the spell. If they choose to put it on the bottom of the library, chances are they won’t get it back that game barring a shuffle effect.

Brokers Veteran is another solid Common that fits into all three families with Blue in its identity. This can trade in the early game and give a shield counter to a key three-drop. Brokers Veteran is also decent sacrifice fodder for Casualty abilities because it can die and provide additional value with the counter. Obscura and Brokers decks will be able to take advantage of the death trigger because of the prevalence of counters payoffs in those archetypes.

For one mana, Witness Protection is an excellent source of Blue removal. It turns any Creature into a 1/1 with no abilities. This is better than something like Sleep with the Fishes because it prevents cards with static or triggered abilities from still generating value outside of combat. Maestros and Obscura decks will have better options, but in a pinch, Witness Protection will always be a worthwhile play.

Expendable Lackey is a glue card for Obscura and Maestros decks. It works well in sacrifice and Connive themes due to its activated ability. For two mana, this one-drop Creature provides a 1/1 Blue Fish token that can’t be blocked. Expendable Lackey can provide two hits of sacrifice fodder for Casualty. It also acts as a solid nonland card to discard with Connive. Expendable Lackey has little impact on the battlefield but is an effective enabler.