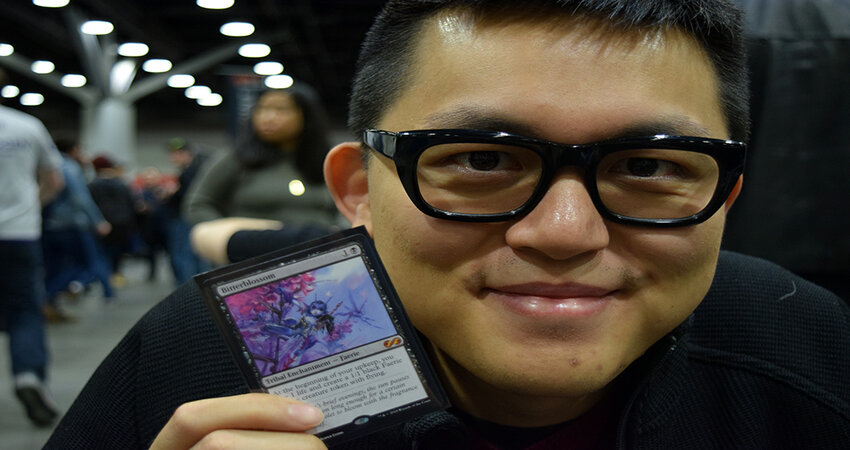 Professional Hearthstone streamer and Magic: The Gathering player Jason “Amaz” Chan was disqualified for a non-game offense this past weekend at the MTG Grand Prix (GP) tournament in Las Vegas.

After nearly making it into the top eight playing Modern at the MTG Grand Prix in Las Vegas, Amaz was declared ineligible over an incident with a judge. Amaz explained why he was disqualified (from his perspective) and why he feels it was unjustified on Twitter.

According to Amaz, he decided to cut through the play area on his way to the pairings board for his 15th round after just taking a loss to prevent him from placing in the top eight at the Las Vegas GP.

Amaz was stopped by a judge (Eric Kubo) who asked him to walk around the long way. Ignoring the judge, he attempted to proceed upon his path, which resulted in an alleged bump. Kubo then stopped Amaz and questioned him as to why he pushed him.

“Realizing my mistake, I said I’m sorry, I’ll go the other way,” Amaz said. “When I was turning away he stopped me and further questioned.”

According to Amaz, Kubo allegedly responded by saying “who in the world would push someone like that?” and then proceeded to grab another judge from the floor for further investigation.

Amaz eventually went to play the round 15 match as the investigation continued, this time involving the head judge. Once the match was over, Amaz was further questioned by the head judge and Mashi Scanlan from Channel FireBall (event runners for the MagicFest and GP in Las Vegas). After hearing Amaz’s side of the story, the head judge decided to disqualify him from the event for aggressive behavior.

Amaz admits that he was in the wrong for trying to pass through the play area, but also feels the situation should have been resolved following his apology.

“I really think that the situation could have stopped after the apology,” Amaz said. “I also think that linking physical contact to aggressive behavior is a reach. I’m so scared of accidentally touching a judge now after this incident.”

From Amaz’s perspective, the disqualification seems like an extreme measure. But there are technically three sides to this story: Chan’s, Kubo and the head judge, and witnesses to the exchange.

CFB or WotC haven’t issued a statement yet, but according to a Reddit user, the story Amaz is telling doesn’t line up with what they witnessed.

“I literally watched him do it,” the Reddit user said. “I was shocked and couldn’t believe he did it. I don’t know if he was tilting or what, but he full on floor checked this judge (who was a bigger guy).”

This is a lose-lose situation for everyone involved. If WotC chooses not to respond, it could sever the relationship with Amaz and upset the MTG community. And if WotC supports Amaz, it makes the judges and CFB look incompetent for escalating the situation.

MagicFest Las Vegas saw its fair share of highs and lows over the weekend. From the groundbreaking Command Zone event to pro Brian Weissman allegedly cheating during the Old School side tournament, many in the MTG community aren’t sure whether to celebrate or be disgusted.

At this time, neither WotC nor CFB has commented on Amaz being disqualified from the MTG MagicFest in Las Vegas or responded to his statement on Twitter.