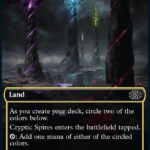 The Double Masters 2022 spoilers season kicked off with the reveal of a large number of cards showcasing new art via extended art Magic: The Gathering versions.

The Double Masters 2022 set focuses on three colors for Draft, providing players with access to both enemy and ally three-color archetype builds. Tying the mana fixing, splashing, and multicolored builds together is Cryptic Spires. The land allows players to pick two colors prior to crafting a deck in Draft, allowing players an opportunity to always have the colors they need for their Draft deck.

Another mana fixing and ramping tool included in the Double Masters 2022 set is the reprint of Bloom Tender. The popular Commander card fits right into a three-color focused Limited Draft, allowing players to add one mana for each color among permanents they control upon tapping the 1/1 elf druid.

Several cards within the Double Masters 2022 set are getting a first-time reprint. Phyrexian Tyranny, from Planeshift, is a popular multicolor Rare that slots into a three-color Draft. Imperial Seal from the Portal Three Kingdoms release is also getting a first-time reprint, with the original card priced at around $1,260 due to the limited number of physical copies in existence. Other Portal Three Kingdoms reprints are also slated to show up in the set as well.

The Double Masters 2022 preview stream also showed off new art for a popular reprint that Magic fans have been asking for via Dockside Extortionist. And extended art was also revealed for cards like Teferi’s Protection, Seeker of the Way, and Thought Scour.

A version of Liliana, Last Hope had already been revealed, showcasing the new texture foil treatment that certain Rare and Mythic Rare cards will receive in conjunction with the Etched foil treatment. And to wrap up the Double Masters 2022 spoilers from the stream was an extended art version of the Eldrazi Kozilek, Butcher of Truth, revealed on the WotC website.