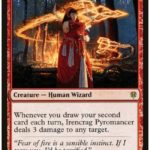 Four Magic: The Gathering sets will leave Standard with fall rotation, removing a large number of powerful cards from the format.

Standard rotation takes place once a year in Magic, removing four sets from the format. Scheduled to take place on Sept. 17, the 2021 Standard rotation will remove Throne of Eldraine (ELD), Theros: Beyond Death (THB), Ikoria: Lair of Behemoths (IKO), and Core Set 2021 (M21). Of the four sets, ELD contains a majority of powerful Magic cards that players are all too happy to see leave the Standard format.

From companions and beasts to removal and Adventure cards, here are the 20 most powerful MTG cards leaving the Standard format with the 2021 fall rotation.

Llanowar Visionary is a powerful three-drop Green creature with a rarity of Common. Slotting into builds like Abzan Yorion and Sultai Control, the elf druid draws a card upon entering the battlefield and can tap for extra Green mana.

Wrecking opponent’s early game strategies since its release in ELD, Bonecrusher Giant has had a major impact on the MTG Standard meta. The adventure card destroys creatures with a toughness stat of two or less in Mono-Red Aggro while also providing a 4/3 Giant on turn three. Other Standard decks Bonecrusher Giant has slotted into are Prismari Midrange, Temur Adventures, Nay Adventures, Gruul Aggro, and Temur Flash.

Indestructible 3/1 two-drops are powerful in the early game. Seasoned Hallowblade gained indestructible when a card was discarded, an easily obtainable option within the Mono-White Aggro. Seasoned Hallowblade is typically played in Mono-White Aggro Standard decks, along with Mardu Winota. The human warrior also gets played in the Historic format some in conjunction with WR builds.

Elder Gargaroth is literally a beast of a five-drop with Vigilance, Reach, and Trample. In addition to three keywords, the M21 Mythic Rare offers its controller three options upon attacking or blocking that include creating a 3/3 token, gaining three life, or drawing a card. Elder Gargaroth is primarily played in a range of Sultai decks and is sometimes also used in Simic Ramp builds.

Speaker of the Heavens

Released in the M21 set, Speaker of the Heavens typically elicits groans from opponents upon entering the battlefield. The human cleric has found a home in Standard via Mono-White Aggro build, synergizing nicely with Heliod, Sun-Crowned and Linden, the Steadfast Queen. Speaker of the Heavens will leave Standard in the fall but players can expect to still see it played in formats like Commander and Historic.

Questing Beast had a huge impact on the Standard meta with the release of ELD. Mostly tied to Green Stompy and Aggro builds, the beast with way too much text on it also gets slotted into Gruul Aggro and Adventure decks, too. It’s a popular four-drop that not too many players will miss in Standard when fall rotation takes place.

Torbran, Thane of Red Fell has been increasing power levels in Mono-Red Aggro since the release of ELD. Increasing damage from a Red source by two, the Dwarf Noble is a top-end finisher that will live on in other Magic formats following the 2021 Standard rotation.

Similar to Questing Beast, Lovestruck Beast immediately increased the power levels of Mono-Green Aggro and Stompy decks. Able to drop onto the battlefield by turn three, as long as a 1/1 was already in play, the 5/5 beast noble is possibly one of the best Adventure cards from the ELD set. Other builds utilizing Lovestruck Beast in Standard are Temur and Gruul Adventures. The noble beast is also a favorite within the Historic deck Selesnya Company.

Robber of the Rich

Slotting nicely into Mono-Red Aggro Standard decks as a two-drop with Haste and Reach, Robber of the Rich disrupts an opponent’s gameplay every time it attacks. The human archer rogue is also popular in Standard builds like Rakdos Knights and Gruul Aggro.

Fueling Sacrifice builds since its release via THB, Woe Strider is a three-drop 3/2 that can Scry and Escape with two +1/+1 counters on it. Slotting into BR Sacrifice and even Mardu Winota builds, Woe Strider will stick around in other Magic formats once it leaves Standard.

Stonecoil Serpent is a unique Artifact snake with Reach, Trample, and protection from multicolored Magic cards. The serpent is typically played in Mono-Green stompy but also slots nicely into Mono-Green Aggro and Mardu Winota. Like many of the ELD cards, Standard players aren’t shedding tears for its soon departure from the format.

Heartless Act is an Uncommon Black Instant that many builds within Standard have relied upon as a cheap removal spell. Able to either remove up to three counters or destroy a target creature with no counters at a cost of only 1B has been extremely powerful within the Standard format. Heartless Act is most often played in Sultai builds, Control specifically. The Instant removal spell is also used in BG Sacrifice and Dimir Rogues.

Likely considered one of the most powerful Equipment Artifacts in Standard, Embercleave consistently wins games within Mono-Red Aggro and Gruul Adventure builds. Go-wide builds love Embercleave due to its cost reduction and Flash aspect.

Sultai Control has become one of the best MTG Standard decks thanks to Yorion, Sky Nomad. The companion forces players to start with a minimum of 80 cards in a deck as opposed to 60, fitting nicely into a Control build that wants to use the Flying bird serpent as a finisher. Yorion, Sky Nomad also slots into builds like Temur Elementals and Azorius Control.

Buying time while also chipping away at an opponent’s health with evasive attacks, Brazen Borrower is the best MTG Adventure card from the ELD set. Most often played in Temur Adventures, the faerie rogue has also had a major impact within Prismari Midrange builds. Players can expect to see Brazen Borrower within Historic builds following the 2021 fall rotation.

Jeskai Cycling has become one of the most powerful MTG Standard decks in the meta thanks to Irencrag Pyromancer. Able to block low-powered Aggro creatures while burning any target for three damage every time its controller draws a second card each turn, the human wizard is super powerful for having a power stat of zero.

Power creep hit an all-time high with Emergent Ultimatum. Played primarily in Sultai Control, or better known as Sultai Ultimatum, the Sorcery spell from IKO has left a major imprint on the Standard meta by casting monocolored MTG cards for free.

Standard 2021 rotation is scheduled to take place on Sept. 17 with the release of Innistrad: Midnight Hunt.