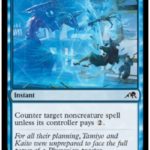 Power levels and Magic: The Gathering synergies have shifted within the Kamigawa: Neon Dynasty Limited format, resulting in a number of removal spells that should get priority when drafting and constructing a Sealed deck.

The Limited format in Kamigawa: Neon Dynasty is unique, containing a large number of Artifacts and Enchantments at the same time via a total of 10 archetypes. Unlike previous Limited formats in Magic, players will prioritize removal deals with these extra threats while also synergizing with them. Many spells also synergize with mechanics like Channel and Modification, adding another layer of depth to the NEO Limited format.

From Blue reprint counterspells to Enchantments that destroy and exile, here are the 13 best Common and Uncommon removal spells for the NEO Limited format.

Spell Pierce is a reprint, bringing back one of the best counterspells to Standard and NEO Limited. The Blue Instant speed spell is great during the early game and takes some strategic moves to make it stick during the late-game stages.

Twisted Embrace is an Enchantment aura with a CMC of 2BB. Auras in Limited have risen in tier status due to the synergy they provide throughout many of the NEO archetypes. Twisted Embrace destroys a creature or planeswalker while also pumping up the creature stats it was attached to by +1/+1, creating even more synergy via the mechanic Modification.

Similar to the staple Enchantments in the MTG color White that exile a permanent, Touch the Spirit Realm exiles a target Artifact or creature. The three-cost Enchantment also has Channel, a mechanic that can’t get countered with a counterspell. Paying the Channel cost can remove an opponent’s Artifact or creature until their next end step or blink something you control with a slight delay to activate enter the battlefield triggers.

Kami’s Flare is a two-drop burn spell that can target a creature or planeswalker. And as an added bonus, the Red Instant spell also deals two damage to that permanent’s controller if you control a Modified creature.

You Are Already Dead

Cheap removal spells like You Are Already Dead will likely be a staple in most NEO Limited builds playing the color Black. The Instant speed spell destroys a target creature that was dealt damage that turn and draws a card as an added bonus for only one Black mana. You Are Already Dead also works well with Fang of Shigeki, a one-drop Green creature with Deathtouch.

Banishing Slash is a Mono-White spell that destroys an Artifact, Enchantment, or tapped creature. As an added bonus, if you control an Artifact and an Enchantment, you gain a 2/2 samurai token with Vigilance.

Bite spells in the MTG color Green return via Master’s Rebuke. The Instant spell can also hit planeswalkers, which is an upgrade to bite spells previously seen in the Limited format.

Four mana is typically what a player pays to remove a target creature or planeswalker at Instant speed in the Limited format. Assassin’s Ink can reduce that cost by up to two mana if you control an Artifact and an Enchantment.

Essence Capture is another MTG Blue reprint within the NEO set, countering an opponent’s creature spell. The Instant speed spell also synergizes with Modification, granting a creature you control with a +1/+1 counter.

Dealing four damage hits a majority of NEO creatures. Voltage Surge deals two damage to a target creature or planeswalker for one Red mana. But it can deal four damage if you choose to sacrifice an Artifact, synergizing with the BR archetype.

Lethal Exploit grants a creature -2/-2 until the end of a turn for a cost of 1B. The Instant spell improves with Modification synergy, applying an additional -1/-1 for each Modified creature you control when Lethal Exploit is cast.

Synergizing with Artifact themes throughout the NEO Limited archetypes, Dragonspark Reactor deals damage to an opponent and up to one target creature via the number of charge counters on it. It can also become sacrifice fodder when needed in the BR archetype.

Typically a sideboard card, Fade into Antiquity is a main deck removal spell in the NEO Limited format. There are a ton of Artifact and Enchantments in the set and the Green Sorcery speed spell exiles them as opposed to destroying them.