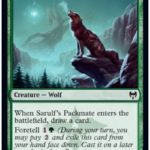 The color Green in Magic: The Gathering will look to continue its domination as the best color in Limited with the release of Kaldheim.

Releasing digitally on Jan. 28, Kaldheim (KHM) contains the mechanic Snow. Appearing for the first time in Magic via Ice Age, Snow is a supertype that has no individual function on its own. But the mechanic has major payoffs from Snow lands and permanents when played together.

Green in KHM contains a number of Snow cards that synergize with one another within the Limited format. Honorable mentions that didn’t make the cut due to their weakness outside a Snow build include cards like Spirit of Aldergard, a Snow creature that tutors Snow lands and gains attack stats based on the number of Snow permanents on the battlefield. With Snow lands in play, three-drops like Icehide Troll gain indestructible and get pumped, while Sculptor of Winter can untap Snow lands for other paid abilities and Horizon Seeker can Boast to find a basic land card.

From an aura rune that can enchant any permanent to scaling counters, here are the best Common and Uncommon Green draft picks in KHM Limited.

Sarulf’s Packmate is a solid Limited card within KHM and one of the best Commons to grab in Draft. The wolf is a four-drop 3/3 that draws a card upon entering the battlefield. Cantrip in Limited is undeniably powerful, where players typically never have more than two copies of the same card—unlike Standard Constructed, where four copies of a card within a deck is common.

In addition to card draw, Sarulf’s Packmate uses the new KHM Foretell mechanic. This allows a player to split up its casting cost over two turns. In the case of Sarulf’s Packmate, the wolf can enter the battlefield later in a match for only 1(G) in conjunction with whatever card it cantrips, stabilizing one’s board state.

Big stompy creatures are a staple in the color Green. Rootless Yew is a five-drop 5/4 stompy Treefolk that tutors for an even larger creature when he dies. Upon death, a player can search their library for a creature card with power or toughness of six or greater and then put it into their hand. Rootless Yew trades out with an opponent’s large creature when blocked and then tutors an even bigger and stronger stomper out to play. Ideal finishers that Rootless Yew can find include Ravenous Lindwurm and Cinderheart Giant.

Boreal Outrider is one of the best Green Snow permanents. The snow elf warrior is a three-drop 3/2 that uses Snow mana to add a +1/+1 counter onto a creature when it enters the battlefield. Boreal Outrider is an overall solid Limited creature with a big upside thanks to Snow. It fits best into UG builds but will also work with enough Snow lands in other color combination decks. If a player strikes out on Snow lands, Boreal Outrider is still a decent three-drop that can block bigger threats if needed.

There’s a cycle of five Common aura runes in KHM in which Rune of Might is the best. Each of the aura runes is a solid pick in Limited Draft due to them drawing a card upon entering the battlefield. Rune of Might stands out as the best because it also pumps the enchanted permanent with a +1/+1 counter and gives it Trample. Creatures in Green use counters and the keyword Trample best. The aura rune, Rune of Might, can also enchant Equipment such as Dwarven Hammer, Elven Bow, Tormentor’s Helm, and Valkyrie’s Sword.

Similar to the Limited staple Prey Upon, Blizzard Brawl uses Snow to turn the KHM Sorcery spell into a heavy hitter that opponents may not have an immediate answer to. If Blizzard Brawl’s controller owns three or more Snow permanents, a creature they control gains +1/0 and indestructible until the end of turn. That creature then targets an opponent’s creature and they fight. Indestructible is a game-changer, often taking out an opponent’s creature on the battlefield without having to trade.

Littjara Glade-Warden has solid stats for a Common Limited card that’s also a Changeling. The four-drop 3/3 shapeshifter has a powerful mana ability that scales and can stabilize a player’s board if they stall out during the late game. For 2(G), a player can exile a creature card from their graveyard to add two +1/+1 counters onto a target creature. Littjara Glade-Warden is an easy first pick that scales power levels. And as an added bonus, it synergizes with tribal theme cards. The only downside to the shapeshifter is that its ability can only be used at Sorcery speed, preventing it from being a combat trick at Instant speed.

Elven Bow is one of the stronger Artifact Equipment cards in KHM, attaching itself to a created token. When Elven Bow enters the battlefield, it creates a 1/1 elf token and then attaches to it. It also gives the creature it’s attached to +1/+2 and the keyword Reach. For the cost of (G), Elven Bow creates a 2/3 token that leaves behind the Equipment if it dies. For a cost of three mana of any color, that player can then Equip another creature, pumping it with +1/+2 stats and giving it Reach.

Fyn, the Fangbearer is a human two-drop 1/3 with the keyword, Deathtouch. He also puts opponents on a five turn clock by using poison counters. It’s unlikely that poison counters will end a match in Limited, but a 1/3 creature with Deathtouch can take out early threats while preventing larger creatures in the late game from attacking. The only downside to Fyn, the Fangbearer is that he’s a legendary creature, meaning only one copy can be on the battlefield at a time. Within the KHM Limited format, though, most players will only want one copy of Fyn

Ravenous Lindwurm is a six-drop 6/6 finisher that also has a player gain four life upon entering the battlefield. Every set contains a big Green finisher, but Ravenous Lindwurm stands out in that the four Lifegain can easily stabilize a player during a lengthy match while the wurm shreds an opponent’s blocking creatures. Having Trample would make Ravenous Lindwurm even better, synergizing nicely with Rune of Might.

Cheap combat tricks are strong within the Limited format. Snakeskin Viel is such a trick, costing only (G) to cast. The Instant speed spell puts a +1/+1 counter on a creature and the target creature also gains Hexproof until the end of turn. A counter added to a creature in combat typically achieves board state advantage, while Hexproof protects a specific creature when threatened with most removal.