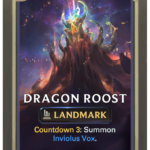 A total of seven Legends of Runeterra Worldwalker cards were revealed today, supporting a variety of regions and archetypes.

The LoR Worldwalker expansion will release on May 25, showcasing four new champions and a total of 65 cards. Only one champion spoiler remains—likely Annie—with Jhin, Illaoi, and Bard already revealed. Leading up to the reveal of Annie and her support package, Riot dropped seven Worldwalker spoilers today, which support various archetypes within multiple regions.

Baccai Witherclaw, a five-drop Shurima Follower with 5/4 baseline stats, was the only unit revealed today. Its ability gives an enemy unit -2/-0 this round when an enemy is Challenged, which includes Challenger and Vulnerable.

Two Landmarks were also revealed in the Shadow Isles and Targon regions. Dragon Roost in Targon has a countdown of three to summon Inviolus Vox (a beefy 5/6 dragon with Fury). Haunted Tomb taps into reanimation archetypes with a countdown of two that revives the strongest dead ally.

Of the three Worldwalker spells revealed today, Strategic Execution has the greatest potential. Based in the Noxus region, the four-drop stuns two enemies or lets you spend six mana to summon a Legion Genera—a 4/4 five-drop Follower who synergizes with the stun archetype.

The other three spells were Celestial Trifecta in Targon, Dragon Ambush in Ionia, and Wings of the Cryophoenix in Freljord. Celestial Trifecta will likely draw three cards in total at Burst speed and Cyrophoenix has potential within Control decks.

Players can test the new LoR support cards with the release of the Worldwalker expansion on May 25.