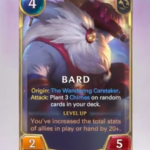 Breaking regional rules within Legends of Runeterra, Bard is joining the champion roster via the Worldwalker expansion with an Origin that focuses solely on Chimes.

Riot is changing up regional support in Legends of Runeterra via the Worldwalker expansion keyword Origin. An Origin is essentially an alternate region assigned to specific champions that allow cards within a deck that meet a specification. In the case of Jhin, cards from any region could be added to a deck with them as a champion as long as the card has a Skill. Bard, revealed today, is an LoR Worldwalker champion with an Origin that allows cards from any region as long as the card plants Chimes.

Bard is all about Chimes, a Boon that grants a random ally in hand +1/+1 stats.

Bard’s origin is The Wandering Caretaker, taking up a region spot in a deck that includes the new Worldwalker champion. Their Origin allows players to put any cards that plant Chimes into their deck during deckbuilding. And as an added bonus, at Round Start, a Chime is planted in the deck for each Bard that started the game in that deck.

Bard’s Traveler’s Call is a Burst speed spell that draws a Follower from your deck. It then activates the effects of all Boons in the top three cards of your deck. 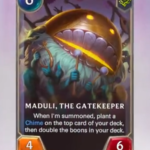 Following the reveal of Chime support cards from yesterday, only two additional tribal cards were added during today’s Worldwalker spoilers.

Maduli, the Gatekeeper is a top-end six-drop 4/6 that plants a Chime on the top card of your deck and then doubles the Boons in your deck. Cosmic Binding is a five-cost modal spell that deals two to an enemy, stuns another, and plants three Chimes on random cards in your deck.

Players can test out Bard and the Chime tribal support with the release of the LoR Worldwalker expansion on May 25.