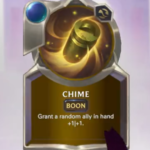 The path toward Bard getting revealed as the next Legends of Runeterra champion in the upcoming Worldwalker expansion was laid out today by Riot Games with the introduction of Chimes to the digital card game.

Scheduled to release on May 25, the LoR Worldwalker expansion will include four new champions that break region rules. Jhin and Illaoi have already been previewed, leaving Bard and likely Annie. Bard was confirmed today with the reveal of Chime, a token generated that has the keyword Boon and grants a random ally in hand +1/+1.

A Boon attaches itself to another card in a deck. A Chime, for example, will get placed in your deck and when that card is drawn, the effect of the Boon is activated. Upon the Boon effect triggering, a random ally in hand will be granted +1/+1 stats. And it’s likely that the card the Boon was attached to can get the granted stats unless the trigger for Boon goes on the stack prior to the card getting put in hand.

A Chime grants Bard buffs in League. The Legends of Runeterra team has transformed this to grant allies in hand a buff instead. Buffing cards in hand creates unique opportunities while changing up the norm of buffing units on the battlefield or in your deck prior to getting drawn.

Chimes will play an important role within the Bard package but seem flexible enough that other archetypes can use them as well. Byrd, the Bellringer, for example, is a Bandle City unit that plants a Chime on the top of your deck when summoned, buffing up cheap Bandle City units in your hand when that Chime is drawn your next turn.

The Landmark Mystic Vortex, also revealed today, is another Chime-synergistic LoR card that has potential in a variety of archetypes. It’s unknown at time of writing whether a Chime activating on a card in hand triggers Fated, but it seems possible since it’s getting targeted by an ally card. If this is the case, units in hand with Fated can scale greatly in power prior to ever hitting the battlefield. As an added bonus, Mystic Vortex also provides card draw.

And it wouldn’t be an LoR Worldwalker spoiler drop that introduces a new form of Trap without the original Puffcap itself making an appearance. Proximity Puffcap is a two-drop Slow speed spell that deals one damage to a unit. The Bandle City spell will deal three damage instead of one if your Boons or Traps were activated this round.

Players can test out Chime and LoR Boon synergies with the release of the Worldwalker expansion on May 25.