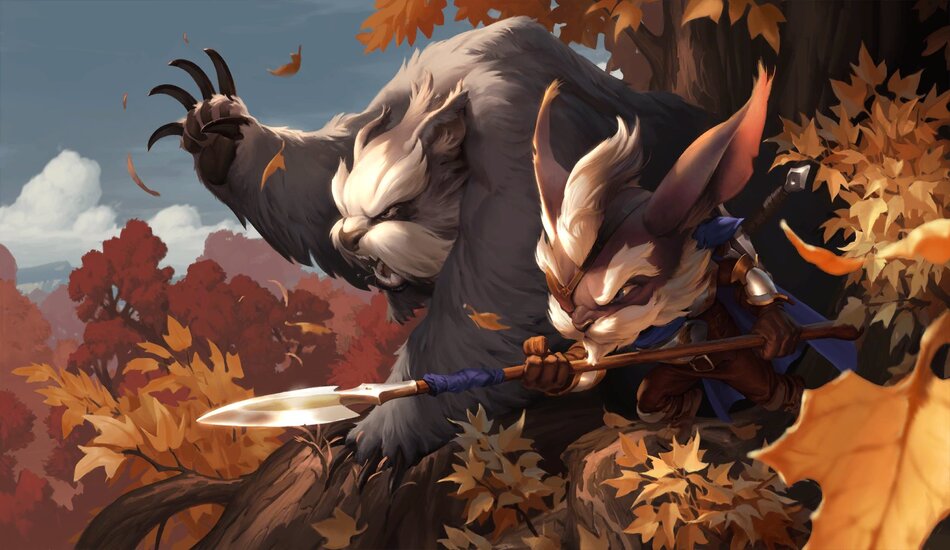 Riot Games shared its first image of new characters and a possible hint of the new region coming to Legends of Runeterra today.

Set to release on April 28 via PC and April 30 on mobile, LoR is leaving open beta with an official launch. Riot began marketing its digital card game release with the launch of its first Tales of Runeterra video yesterday. And now, the company revealed two characters via an image on Twitter today.

The color scheme on the Yordle with the spear, as pointed out in the comment section, looks similar to those in the Demacia region. Rumors hinted at Bilgewater being the new region in LoR, but this image may hint at Targon instead. The only hint provided in the image is that the featured character is a “seasoned tracker.”

Riot dropped a second image on Twitter, also featuring a character in Demacia armor who “never goes alone.” The moose in the image, however, doesn’t seem to be thrilled about being hauled around.

But Riot wasn’t done revealing spoiler teasers for its upcoming set. A third image was posted on Twitter asking players, “Who leads these hardy rangers and noble companions?” As many fans in the comment section suggest, Riot may be teasing the addition of Quinn to the Demacian region.

Over 120 cards are expected with the official launch of LoR, along with a new region. A total of 11 new champions has already been announced. But it’s unknown at this time how the 120 cards will be spread out.

LoR streamer Kozmic has a theory that there are 63 cards in the new region, along with 10 cards being added to existing regions. This would put the total card count at 123. As Kozmic points out in his post on Twitter, any additional cards would put the total count over 130, which doesn’t line up with Riot’s announcement last week.

The set release date for the new 1.0 LoR region and cards takes place on April 28 via PC. An official launch will take place on April 30 that includes mobile access worldwide.