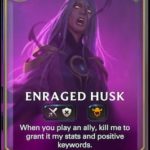 Three more Legends of Runeterra Husk tokens dropped during today’s Forces from Beyond spoilers, along with additional regional support cards.

Releasing on July 20, there are three confirmed LoR champions for the Forces from Beyond expansion. Kai’Sa was revealed yesterday, making today a teaser day for the next champion. Every Legends of Runeterra set has at least two champions that were designed to be played together, giving new and casual players a baseline deck to play that’s somewhat easy to pilot. A single Husk token was spoiled yesterday, tying the champion who creates the Husks to Kai’Sa. Three more Husk tokens were revealed today, potentially setting up Evelynn as the support champion to Kai’Sa.

Each Husk spoiled so far is from a different region, costs one mana to cast, is a token (produced from another card), and has 0/1 base stats. There are 10 regions within LoR and an eleventh called Origin that breaks traditional regional rules. Each of the Husk tokens showcases a positive keyword that is synergistic with that specific region. 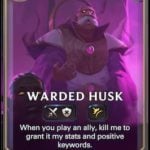 Stubborn Husk, for example, represents the Freljord region and has the positive keyword Regeneration. It costs one mana to cast and becomes sacrificial fodder (Shadow Isles synergy) upon an ally getting played. The positive keyword attached to the Husk then transfers over and is granted to the ally that was played.

A total of four other LoR regional support cards were also revealed today, featuring either units or spells from the regions Targon, Noxus, and Freljord. The Noxus region got even more support for chunky attack units via Captive Yeti, Freljord got Rimefang Pack and Frost support, while Targon received a vanilla five-drop with heal. 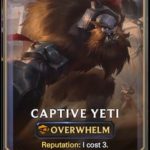 Captive Yeti is a six-drop in Noxus with Overwhelm that can cost three instead with Reputation. The Yeti’s base stats are 5/5 and it synergizes great with yesterday’s sleeper Forces from Beyond spoiler support card, Trifarian Training Pits.

Cracking Ice is a cute Burst spell in Freljod that grants an enemy Frostbite at the start of the next round for only one mana. The Freljord spell is a huge boost to Ashe decks, whose already been sitting on the fringes of the top LoR meta decks since the Worldwalker expansion was released.

Frozen in Fear is another Frelord support spell that synergizes with Rimefang Pack, which doesn’t look busted but has meme shenanigan potential. And Solari Stellacorn is a five-drop Targon unit that heals all allies three if cast at Daybreak.

Players can test out all the new Forces from Beyond archetype support cards and champions when the Legends of Runeterra set drops on July 20.