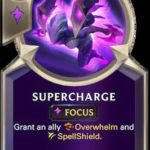 Riot Games is continuing to push card game boundaries with the newest Legends of Runeterra expansion, Forces from Beyond, highlighting three new champions and a focus on regional archetype support.

Scheduled to release on July 20, the LoR set Forces from Beyond will feature Kai’Sa, Gwen, and Evelynn. The first champion to get revealed was Kai’Sa, featuring a solid support package. Gwen was the second champion to get spoiled, showcasing the new keyword Hallowed. And Evelynn was the final Forces from Beyond champion, using a cycle of Husk tokens.

All Forces from Beyond spoilers will drop daily, starting on July 13 and leading up to the official launch. Here are the best Legends of Runeterra spoilers from the new expansion.

Supercharge is Kai’Sa’s champion spell that can get included within the main deck without having to add the champion herself. Slotted within the Shurima region, the spell grants an ally Overwhelm and Spellshield at the cost of only three mana and can get cast at Focus speed.

Before the Forces from Beyond spoilers, the Legends of Runeterra balance team nerfed Zenith Blade via Patch 3.10. Similar to Supercharge, it has a cost of three mana within the Shurima region and it used to grant Overwhelm in conjunction with +1/+2 granted stats. Zenith Blade is a Slow spell and now only gives Overwhelm for that round.

With both Zenith Blade and Supercharge in the same LoR region, Shurima is getting a huge boost in power with the release of Forces from Beyond. Zenith Blade was one of the most played Shurima spells prior to the nerf and it’s possible that Kai’Sa’s champion spell will take over as a must-include spell in a wide variety of archetypes.

There is a downside to Trifarian Training Pits in that it’s essentially a do-nothing four-cost Landmark (unless you have a five-plus power unit attacking) that can get destroyed. But when compared to existing cards within the Noxus region that either have Rally or Scout, the four-cost Landmark is a huge upgrade.

Rumble and Vladimir are the two champions that will likely benefit the most from Trifarian Training Pits. Both sit on the fringe of the meta and having the potential to attack twice on each attack turn is a massive upgrade to both LoR champs.

Despite landing in the Targon region, Mikhael’s Blessing is the first LoR spell at Burst speed to remove all negative keywords from an ally, which includes champions. As an added bonus, the ally is granted +1/+2 stats as well. Negative keywords include Can’t Block, Stun, Fleeting, Immobile, Ephemeral, Frostbite, Vulnerable, and Silence.

Mikhael’s Blessing is literally the “nope” spell that counters negative keywords forced onto your units while serving as a combo piece via cards that already have a negative keyword assigned to them. The possibilities are vast and the true potential of Mikhael’s Blessing won’t likely get realized until the Forces from Beyond meta begins to settle.

There was some debate in the LoR community as to whether Silence was a negative keyword upon the reveal of Mikhael’s Blessing. And it is, verified by game designer Riot Durdle. While removing Silence at Burst speed is great, the Targon spell will likely get used more against negative keywords like Stun, Vulnerable, and Fleeting. And for SI/Targon fans, Mikhael’s Blessing removes Can’t Block from The Undying.

Landmarks have had a major impact on the LoR meta since they were first introduced into the digital card game. Rite of Passage is a two-cost Focus spell in the Shurima region, which is packed with Landmark support. Upon casting the Focus speed spell, Rite of Passage will Manifest an allied Landmark that had been destroyed that game and summon it.

Manifest allows a player to look at three random cards and choose one. In the case of Rite of Passage, it looks at three random Landmarks that have been destroyed during this game. Considering most decks don’t run more than two Landmarks, finding the right one to revive and summon isn’t exactly rocket science.

The standard cost reduction for Glory’s Call will likely be four, allowing players to Manifest a card from the Emperor’s Deck that has a cost of nine or less for only two mana. And with three Ascended champions, the Burst speed spell is essentially free to cast.

There are nine individual cards within the Emperor’s Deck, a deck of 15 cards that are created upon Azir Ascending to level three. The only card that Glory’s Call can’t Manifest is the 10-drop Slow speed spell, Ascended’s Call.

Under normal conditions, the Emperor’s Deck replaces the ally deck upon Azir Ascending to level three and the order of the cards is random, except for Ascended’s Call, which is placed at the bottom of the deck. Glory’s Call allows players to have more control over what Emperor’s Deck cards they want via the Manifest mechanic.

All best Legends of Runeterra cards from the Forces from Beyond set will get added as they are revealed leading up to the expansion’s official launch.

Updated July 18 12:30pm CT: All best LoR cards from the Forces from Beyond expansion that have been spoiled so far were added.