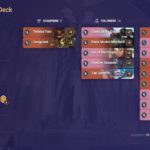 Competitive LoR gameplay is kicking into high gear with the reveal of the Twitch Rivals tournament taking place on May 14. Grassroot community events have been around since the open beta release and yesterday’s Principles of Strength community invitational was a prime example of what a single-deck format with a sideboard would look like.

Originally created by SilverfusePlays, Gummi_God added a few tweaks and changes to Kleptomaniac that earned him a spot in the top four yesterday. Heralded by LoR champions Twisted Fate, Gangplank, and Karma in the sideboard; the main strategy behind Kleptomaniac is to steal your opponent’s cards in conjunction with Plunder and use them to your advantage.

Drawing cards, from either your opponent’s deck or your own, levels up TF quickly while the Gangplank package provides guaranteed damage to an opponent’s Nexus. Gummi admits that the build is still a “work in progress,” but it shouldn’t come as a surprise if Kleptomaniac becomes a staple in future competitive and ranked LoR gameplay.

Mono-Demacia decks have been top-tier since the LoR open beta days. Created by BruisedByGod, several variations have spun off it, including Navioot’s Lucian and Vi Aggro deck that was originally crafted by Riku Miyao. The build is primarily Mono-Demacia with the exception of Vi, who’s a solid champion thanks to the aggro/low-cost unit nature of the deck.

Vi is able to level up relatively quickly while Lucian, in conjunction with Senna, provides attack pressure. Grizzled Ranger also increases attacks via Scout while Loyal Badgerbear is a solid three-drop for either defensive or offensive purposes. Navioot finished second at the LoR Principles of Strength community invitational, proving Demacia is still one of the strongest regions in the Rising Tides expansion.

Finishing first in the LoR NA community invitational, Prismaticism’s Unyielding Fiora was similar to Navioot’s build but ran a couple of more spells with fewer units. The foundation of Prismat’s deck included the typical early-game Mono-Demacia package with the addition of Grizzled Ranger and Badgerbear, along with Radiant Guardian for Lifegain. The deck ran Fiora and Vi as champions with a focus on spells, like Unyielding Spirit, for Fiora.

The Rising Tides spell, Unyielding Spirit, was included in several of the EU community invitational decks, proving that it shouldn’t be dismissed due to its casting cost of six mana. In conjunction with other spells like Riposte and Single Combat, Fiora provided pressure that gave Prismaticism’s deck the necessary advantage in the final mirror match against Navioot. But it was still a very close match, proving that both build’s are top-tier in competitive LoR gameplay.