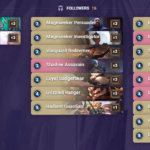 Legends of Runeterra’s newest expansion, Rising Tides, has been out for over a week now and the tournament scene has already taken off. The Principles of Strength invitational saw players in Europe competing for a spot in a $2,000 prize main event taking place near the end of May.

A tournament meta will differ vastly from a ladder meta since you need to play more games to succeed and climb faster. But a tournament meta can give an alternate look into viable strategies to get better with.

Another aspect of a tournament meta that varies from the ladder meta is that participants are in a best-of series where players are also given the chance to sideboard up to 15 cards from their main deck. This allows players to tailor their decks to respond to potential counter matchups better with the help of tech cards to answer specific problems that the deck would normally struggle with in a best-of-one scenario.

Here are some of the best performing decks from this tournament:

As the winning list for the tournament, Karma/Lux gathers the most eyes as a high-performing deck. This version uses 12 new cards from the latest LoR set.

The strategy to perform with this deck is simple. Use your early efficient Demacia minions to threaten your opponent and control the board. When their tempo is about to run out of value, use Karma and Lux to achieve ridiculous amounts of value that other decks will have trouble keeping up with.

Purify and Detain from Mageseeker Investigator let you deal with any late-game threats that would give you any potential problems, like a Ledros. Unyielding Spirit gives your late-game minions protection that only a few regions can actually deal with. Will of Ionia and minions with effects that Obliterate, which had a low turnout at this tournament, are the popular ways of countering this card.

Fans of Mono Demacia should rejoice since the deck is still strong with all of the new tools the region has received, despite the Bannerman nerfs before the expansion drop. The concept of how to play it still doesn’t differ too much. Use your strong Demacian units to control the board and put your opponents on a quick clock. Demacia’s spells also assist in doubling as protection for your units, like the new spell Ranger’s Resolve, giving you safety from AoE-style answers.

Corina Control was the last noteworthy list from the EU side of the competition. Using only six new cards from the expansion, this control deck seeks to grind out every match. This is achieved by having Vi answer boards and become a scaling threat, while Corina can wipe boards and deal direct damage. Ledros serves as an ultimate clock that puts your opponent on an eventual timer with a body that can’t be eliminated through conventional means.

The removal spells that the Shadow Isles and Piltover & Zaun provide allow you to respond to early units that would aim to stack residual damage onto your Nexus before you can perform your control strategies. Grasp of the Undying is especially strong against aggressive decks in the meta right now due to all of the aggressive three-health units running around at the moment.

Players seeking to try any of these decks on the ladder should be reminded to change some aspects of this list. This will allow you to better answer the faster meta that’s all over the LoR ladder.