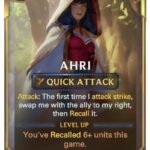 Riot Games revealed Ahri today, the final Legends of Runeterra champion within the Magic Misadventures expansion, showcasing her synergy with the keyword Recall.

Scheduled to release on Dec. 8, the LoR Magic Misadventures expansion will include the champions Kennen, Rumble, Pantheon, and Ahri. Slotting into the Ionia region, Ahri is a two-drop with Quick Attack. The first time she strikes with an attack, Ahri swaps places with the ally to the right of her and that ally is Recalled back to your hand. To level Ahri up, you have to Recall six or more units during that game.

Upon leveling up, Ahri becomes a 3/4 with Quick Attack and Elusive and her ability receives two upgrades. The first is “When you Recall an ally, reduce its cost by one.” And the second is her attack ability in that “each time I attack strike, swap me with the ally to my right and then Recall it.”

The difference between Ahri’s abilities after leveling up is huge. Going from only being able to swap an ally to the right upon the first time she attacks to every time has the potential to board wipe an opponent’s blocking units.

Adding to the power of Ahri is her champion spell, Ahri’s Charm, a two-cost Focus speed spell that Recalls an ally to give Vulnerable to an enemy unit for that round. Today’s LoR Magic Misadventures spoilers also included an eight-cost Slow speed spell called Children of the Forest, which summons three Ephemeral copies of the strongest followers that you Recalled during that game.

Two units were revealed, too. Windsinger is a six-drop 4/3 unit from Ionia that, when played, Recalls a unit. And Sai’Nen Thousand-Tailed is a six-drop 3/5 creature from the Ionia region that draws two cards and gives all other allies +1/+1 that round upon being summoned.

Players only have to wait one more day to test out Ahri since she’ll be released with the launch of the LoR Magic Misadventures expansion on Dec. 8.