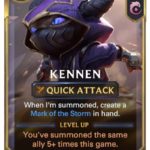 Riot Games revealed today that Kennen is the newest Legends of Runeterra champion with solid baseline stats in the upcoming Magic Misadventures expansion.

Scheduled to release on Dec. 8, Magic Misadventures will contain Kennen, a new dual-region LoR champion. Kennen is a one-drop 2/1 with Quick Attack, creating a Mark of the Storm in hand upon getting summoned. The yordle’s dual regions are Bandle City and Ionia, synergizing with existing Aggro LoR champions like Zed.

As with all champions in LoR, Kennen has a spell called Lightning Rush. It’s a three-cost spell at Fast speed that can recall an ally to deal two damage to anything, which includes your opponent’s Nexus. Upon casting the spell, it creates a Kennen within your deck.

Kennen will likely slot into Aggro builds, specifically Ionia ones that use Elusive followers. The new yordle champion synergizes nicely with Zed but could partner with other LoR champs as well via Recall and Stun synergies. 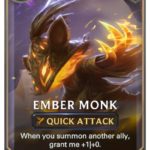 Several other Magic Misadventures were also revealed with Kennen today. Ember Monk is a four-drop 3/3 with Quick Attack that gains +1/+0 when you summon another ally. And Rissu, The Silent Storm is a five-drop 1/1 that summons a 7/3 Stormcloud upon being summoned itself.