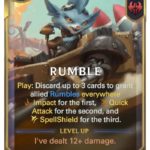 Arena Promoter and Bilgerat Rascal both Manifest a Mecha-Yordle upon discarding a card when played, and they provide additional value to that manifestation. Fix-Em-Uppers synergizes with Discard and damage to an enemies Nexus by gaining +2/+1 stats, and Electro Harpoon uses Discard to deal two damage to a unit (which can be your own), along with two damage to the enemy Nexus.

Rumbles spell is Rumble’s Flamespitter, a Burst speed LoR spell that grants an ally +2/+0 and Impact, synergizing with the champion towards its level up and abilities post-level up. Arena Mechacaster is a six-drop 4/5 that gives all attacking allies +2/+0 for the round when it attacks as well.

Players can test out all the Yordle and Mecha-Yordle synergies within the new LoR expansion, Magic Misadventures when it releases on Dec. 8.