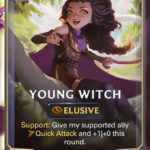 Aside from the Support cards themselves, Flower Child, Tasty Faefolk, and Swole Squirrel are cards that will appreciate all the help they can get. Flower Child is a scaling one drop that’s strong if you’re going second since you can pair it up with a strong Support card on turn two, like War Chefs, Legion Drummer, or the recently-revealed Tyari the Traveler. If you hit this powerful curve on turn one into two, you can sometimes run away with a game. As a Lifesteal minion, Tasty Faefolk gaining stats can help raise the effectiveness of a defensive deck’s longevity. Swole Squirrel surviving any combat makes it an imminent threat every other turn since you can make it strike mid-combat with spells and threaten lethal damage.

Based on previous expectations and the words “Fae Ringleader” in today’s post, Lulu could be revealed tomorrow.

LoR: Call of the Mountain will officially be released for PC and mobile on Aug. 26.