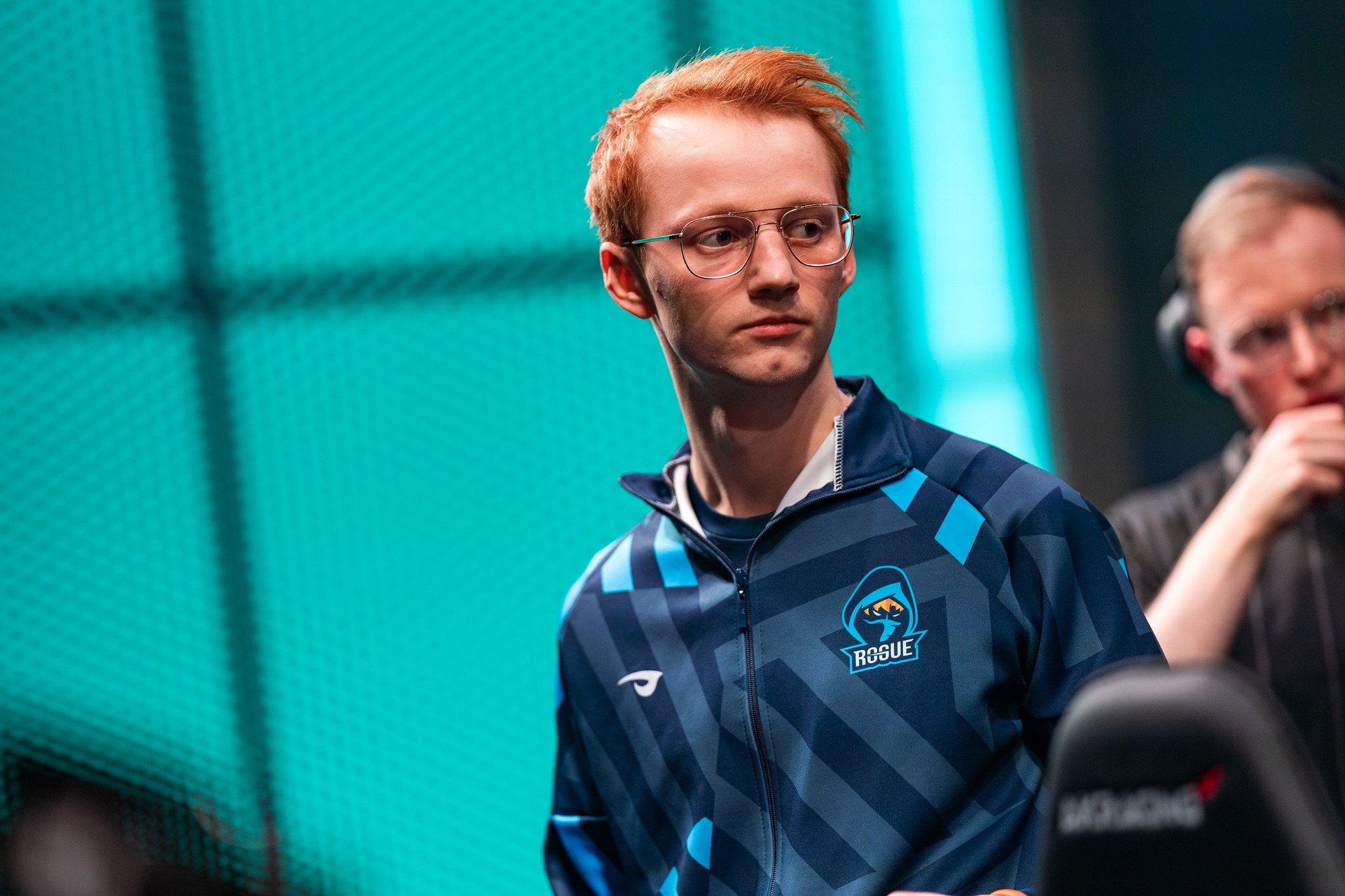 In professional League of Legends, the road to the top will always be filled with bumps, roadblocks, and detours. This is especially true in Europe, where every team has worked themselves to the bone to improve enough to represent their region at the World Championship this year.

Only one team could wear the regular season crown and automatically lock in a spot at Worlds, though. This split, it was Rogue who reigned supreme. The squad ended the 2020 LEC Summer Split with an impressive 13-5 record, led by great team play and some breakout seasons from their fiery young players.

Rogue’s 20-year-old mid laner Larssen talked with Dot Esports about his growth as a pro this year, how difficult it can be to earn respect in a competitive league like the LEC, and his aspirations for the playoffs and beyond.

When Larssen joined the interview, he was all smiles after locking in the No. 1 spot in Europe. Their path to Worlds had been confirmed and it was finally time for his team to step back and relish the moment.

He said it “[felt] good to be stress-free and just be happy” after winning a season that saw multiple teams rise up and challenge the top teams of the league. Rogue’s resurgence came after spending more than a year as a middle-of-the-pack squad, but their improvements stemmed from a ton of grinding.

“I was really sad last year because we could have reached [Worlds], but we obviously lost in playoffs against Schalke,” Larssen told Dot Esports. “My focus ever since that loss was to reach playoffs. So, it’s like one year of hard work and just focus paying off, [and] it feels really good.”

Larssen also said he started to play with a ton of confidence this year, especially after the addition of star AD carry Hans Sama. The talented marksman taught him how to play with tempo and speed, which helped push Rogue’s strong early game advantage into wins.

In fact, Rogue were the LEC’s best early game team. They had the highest gold difference at 15 minutes, the highest first-to-three-towers rate, and were a top two team in multiple objective control stats, like dragon control, Baron control rate, and jungle control. Larssen also had the highest KDA of any LEC mid laner, with some of the best early-game stats in his role.

“The biggest thing for me is that we have really high confidence now playing as a top team,” Larssen said. “I didn’t have that before. I didn’t come in and think that I’m going to stomp them, but now I come into the game and I’m just confident that I will be better than the enemies, every game.”

Larssen even shot some praise toward the team’s young jungler, Inspired. He believes the 18-year-old gets less credit than he should because “he’s so young, but he’s so calm in-game, plays really well in general, and doesn’t make many mistakes.”

Not everything is perfect for Rogue just yet, though. Larssen acknowledged that they “can definitely get quite a lot better” with a bit more work. He pointed out that the roster gave away some “free wins” due to issues around objectives. They’ve worked on these problems and are continuously working together as a unit.

Respect is earned, not given

The 2020 Summer Split was a rollercoaster for almost every team in the LEC. At certain points during the season, every team looked like they could beat each other. But Rogue stuck with their own playstyle and refined it until they were a top contender.

But it felt like many people still weren’t giving Rogue the same amount of hype that other teams were getting across the league. Of course, Rogue aren’t as accomplished as other teams, but Larssen thinks that all of that praise must be earned, even with a great season under their belt.

“We haven’t played that well in past splits, so people don’t have [a lot of] respect for us—but I don’t mind what other people think,” Larssen said. “We just focus on ourselves, and if we win playoffs, I think people will start respecting us way more.”

He also said that G2 and Fnatic will always be hyped due to their reputation as a forever contender from Europe, while MAD Lions had a huge series win against G2 in the 2020 Spring playoffs.

Rogue haven’t shown up in any of their postseason appearances just yet, having lost early to Origen last split and Schalke last spring. Luckily for them, this looks like the right time to prove all the doubters wrong.

After Larssen plays out the 2020 Summer playoffs, he and Rogue will finally get a chance to test themselves against the best of the best at Worlds 2020. This will be his first time at the global event and he plans to enjoy every single second of it.

He also mentioned two stars, T1’s Faker and TOP Esports’ knight, as exciting opponents. But he isn’t really excited to play against anyone specifically. Instead, he’s looking forward to finally attending the tournament with his teammates.

Larssen also said he thinks the best European representatives for this year would probably consist of Rogue, G2 Esports, MAD Lions, and Fnatic—even though he still has some doubts about the latter squad.

You can catch Larssen and the rest of Rogue in action when they take on Fnatic in the first round of the 2020 LEC Summer playoffs on Sunday, Aug. 23.