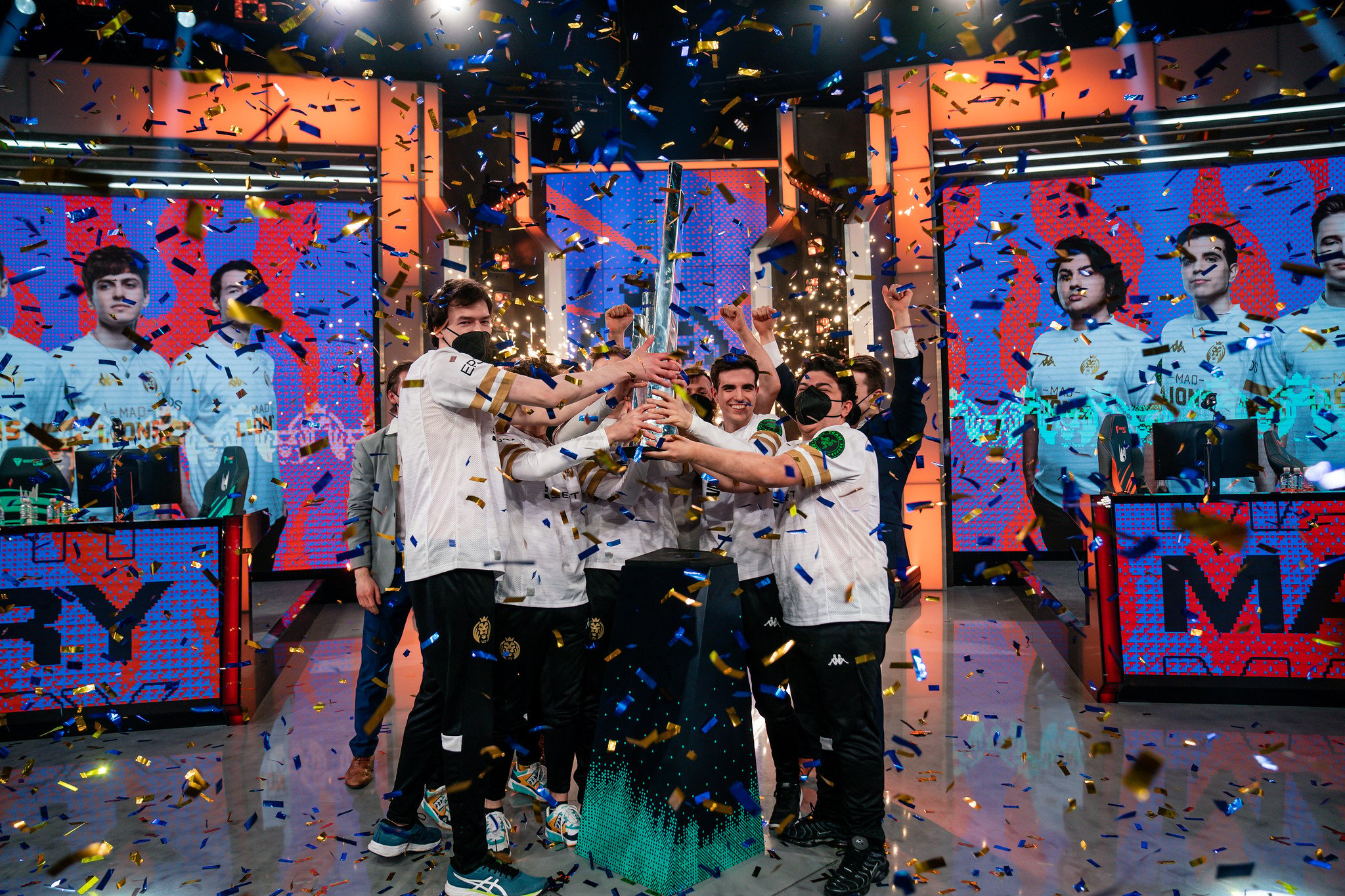 It feels like it was only yesterday when League of Legends fans witnessed the crowning of new kings in Europe at the end of the 2021 Spring Split. Now we’re only a few days away from the start of the next season in the LEC.

Time is going by fast, and things are only going to get hotter from here. Some of the best players in the world will be battling it out on Summoner’s Rift for a chance to not only win the LEC championship, but to represent their home region at this year’s World Championship in China. It’s one of the biggest honors to step onto the largest stage in League, but there are only three slots available and a plethora of hungry wolves chomping at the bit for an opportunity.

From household names to fallen stars, the LEC has seen the rise of a new era ushered in by the young blood of the league, but the old guard aren’t ready to relinquish their hold on the kingdom just yet.

If you aren’t completely sure about who you want to root for when everything kicks off on June 11, take a look at Dot Esports’ rundown on why these LEC squads should get your loyalty this summer.

MAD Lions are the defending LEC champions for a reason. You don’t really need much of a reason to want to cheer for Europe’s young pride after they rocked Europe with a fun, aggressive style of play and equally fun personalities across the roster, both on and off Summoner’s Rift.

This team also put up a great fight during the 2021 Mid-Season Invitational, picking up wins against China’s Royal Never Give Up, North America’s Cloud9, and even bringing Korea’s DAMWON-KIA to five games during the knockout stage of the tournament. Whether its the fiery bottom lane of Carzzy and Kaiser, the flashiness and mechanical prowess of their solo laners, or jungler Elyoya facilitating the way as one of the best junglers in the region, the cubs are now the kings of the jungle.

Get ready for more Armut staredowns as the circle of life continues for the MAD Lions.

What’s not to love about the lads over at Rogue? They’ve got two players who are arguably top two in their role with Inspired and Larssen, and they have one of the steadiest bottom lane duos with rock-solid veteran Hans Sama and young, up-and-coming support Trymbi. Last season, they also picked up Odoamne to round out their roster with one of Europe’s most reliable top laners, who has a plethora of champions at his disposal like Renekton, Karma, Kennen, Gangplank, and Jayce.

They also took down G2 Esports to finally end their seemingly indomitable reign over the league, before coming within a single five-game series against MAD Lions for their first LEC championship. Although they did fall short of their goal, they’ll be looking to finally exorcise their demons and pick up not only their first trophy this season but also earn themselves a chance to redeem themselves at the 2021 World Championship.

The samurais are down, but they are far from out when it comes to the LEC championship. In fact, we could be looking at a revitalized G2 roster heading into the summer, especially after they were sent home packing in the 2021 Spring Playoffs. This past split, Mikyx said the roster became too complacent after crushing the league for so long, but if this squad can refocus their energy, they’re still the deadliest team in the region.

Caps and Rekkles are considered, on paper, as the strongest carry duo in the league, Mikyx and Jankos are still two of the best in their role, and Wunder has remained a rock in the top lane. With more time spent on building cohesion between the new teammates, G2 could come into the summer with a fire we haven’t seen in a long time. Top teams need to lose to not get comfortable, and the (former) kings have been handed a massive wake up call. Time to get to work, lads.

Well, Fnatic fans, if there’s a reason to get excited for this split, it’s because of two things: the debut of Adam as the team’s new top laner, and Bwipo’s start as their new jungler. A new era has truly begun for this organization following the departure of both Rekkles at the end of 2020 and Selfmade this past offseason. But how will this new iteration fare among the titans of the league?

Adam was the best top laner in the LFL and one of the best top laners at the 2021 Spring European Masters with Karmine Corp. The 19-year-old is aggressive, hungry, and ready to prove himself to both his team and its fans. Meanwhile, Bwipo is embarking on a new journey in a new role for Fnatic. Many players—including his former teammate Selfmade—has said his playstyle fits the jungle position a lot better than top lane, and that he plays a lot more for the team than for himself.

This combination could be great if the cards all fall into place. It’s up to some of the veterans, like Hylissang and Bwipo, to help guide their young up-and-comer through his first few games, so they can all grow into a roster to be feared by the end of the regular season.

Vitality might have finished the 2021 Spring Split in last place, but this revamped roster is looking like one of the most intriguing stories of the summer. The team brought in multiple new names to their arsenal, including former Fnatic jungler Selfmade, former mousesports mid laner LIDER, and 20-year-old rookie top laner, SLT.

Selfmade is still one of the most aggressive junglers with an eye for carry champions, while LIDER is bringing in an explosive champion pool with names like Yone, Zed, Irelia, and Akali. SLT is young and has plenty to learn, but this trio in the top side of the map could make for one of the most exciting teams in the league. Vitality have had enough of last place and are ready to jump up with the rest of the big boys as the summer heat begins to build.

SK had a surprisingly strong season in the spring, led by a plethora of young talent combined with some experienced players. The star of the show last split was the rise of Treatz as a top-tier LEC playmaking support after spending so much time in the NA Academy scene. But the team has already decided to trust him in one of the most influential roles in the game: the jungle.

The team has also moved their former head coach Jesiz into the support role as a replacement. This was due to the lack of cohesion between their former jungler TynX and talented mid laner Blue. As a result, they chose to have Treatz become the jungler since his skills and player tendencies with communication and planning have already made him lean towards the role.

Treatz will have to see similar levels of improvement from last season to this season in a new role, while Jesiz will need to get the wheels spinning after stepping away from the pro scene for so long. It’ll be equal parts exciting and nerve-wracking, but the team looks ready and willing to meet the challenge together.

If you’re looking for some underdogs for the 2021 Summer Split in Europe, these next few teams should catch your eye.

After finishing last split in fourth place with a 9-9 record, Schalke 04 has made some drastic changes to its roster with new additions in the jungle and mid lane with Kirei and Nuclearint. With reports of the team being forced to sell their LEC spot due to financial issues with their main team in the Bundesliga, this season is filled with pressure for this roster.

But there is a world where a Cinderella story writes itself out with this team. In what could be their last season in the LEC under the S04 banner, these players are set to make their final stand in the summer. Broken Blade and LIMIT have shown some bright spots through the season, and if there’s any team to pull off a miracle run, it’s the boys in blue. Maybe this lineup has one more miracle run left in them for the summer to make things extra spicy when the playoffs comes around.

Last split, Misfits Gaming barely missed the playoffs after their postseason fate was decided by the head-to-head record they had with SK Gaming, a team they hadn’t beaten during the regular season. This season, however, they will be coming in with a new head coach and motivation towards Worlds contention.

This team still has an exciting 20-year-old jungler with Razork, who might be able to punch in a Lee Sin game or two this split. HiRit and Vetheo have shown glimpses of greatness but still have plenty of room to grow, and their bottom lane consists of two talented veterans with Kobbe and Vander. Again, the potential with this team makes them an interesting organization to follow, so watch for them in the battle for the final few spots for the playoffs.

When looking at Excel’s chances for the 2021 Summer Split, you’ll have to look at two places: the mid lane and bottom lane, especially with the addition of Denyk to the roster. The 26-year-old veteran will pair up with Patrik and should be a good focal point moving forward. The team’s former support Tore struggled with multiple aspects of his game in the spring, so having a steadier presence alongside one of the better ADCs in the league should prove to be a boon to their success.

Of course, we can’t talk about Excel without mentioning Nukeduck. For multiple seasons, fans and analysts have questioned whether he’ll be able to pull off his elusive “year of the duck,” only for him to fall short. This might one of his last chances to prove himself, because another disappointing finish will not be acceptable for both himself and his team.

Astralis hasn’t made any changes to its roster since they were forced to pick up MagiFelix when Nukeduck stepped away from the starting lineup due to personal reasons. That team eventually ended in second-last place and as a result, expectations are very low.

This would be the perfect time for this roster to bring out some weird picks to edge out some wins, since there will be many opponents that will underestimate your level of play. This roster will remain the underdog of the league until the end of the season, and that means there isn’t any pressure on these players’ shoulders. Play freely and see if you can surprise the fans. Plus, everyone is probably even more excited for Zanzarah content on the broadcast, so hopefully we’ll get to see him on our screens a bit more this season.