The Yordle Gunner’s back and better than ever. 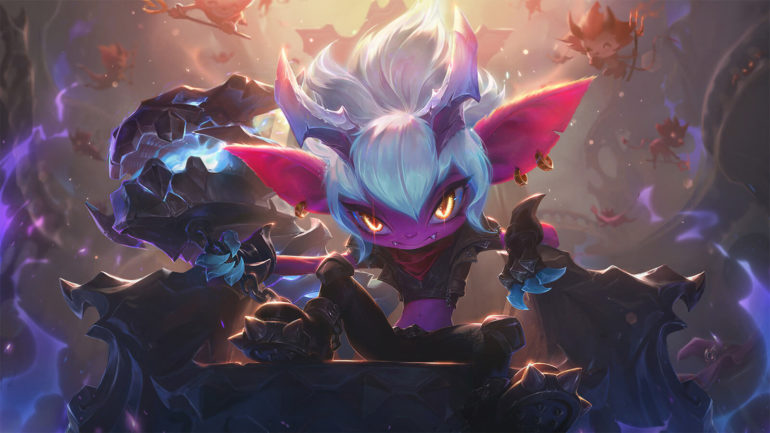 Calling all solo laners! Is that a rocket in your pocket?

If you love manning the mid lane but haven’t yet picked up Tristana, that should be your first priority. What initially began as a blast from the past has now turned into a world-wide phenomenon, with players like G2 Esports’ Rasmus “Caps” Winther busting it out for a win against SK Gaming, Golden Guardians’ Kevin “Hauntzer” Yarnell bringing it topside to shoot down the surging 100 Thieves, and SKT T1’s Lee “Faker” Sang-hyeok piloting the Yordle Gunner in solo queue.

Why is Tristana suddenly rocketing back into the mid lane meta after not being a meta staple since 2014? A buff that many might have skipped over as insignificant in Patch 9.13 begins to answer that.

In Patch 9.13, released on June 26, bigger things were on the menu. It was the official launch of Teamfight Tactics, League’s newest champion Qiyana had just arrived, and Pyke was getting gutted. That made it easy to pass over buffs to Tristana — after all, she wasn’t exactly meta, and she is quite small being a yordle and all. Her AD growth and base mana were both buffed up a bit, helping her scale slightly better. But the main buff was to her W, Rocket Jump. Its damage was increased by 10 at all ranks, which, while seemingly worthless, actually made her into a stronger solo laner.

The problem with playing Tristana in the bot lane is her lack of early pressure compared to other popular picks like Caitlyn and Lucian. She’s not as safe as Ezreal or Xayah, and while she scales like a monster, the meta just doesn’t allow her to stall the game long enough to reach critical mass. But throwing her in the middle lane bypasses a lot of those weaknesses.

In a shorter lane like mid, Tristana’s huge range on Rocket Jump keeps her much safer. By farming in a solo lane, she gets more experience, which is critical since her attack range scales with levels. If Tristana is allowed to reach her maximum attack range quickly, she’ll take down most enemies before they can even get close, turning her into a late game killing machine. She’s also a good bully against melee champions, since her E, Explosive Charge, is extremely threatening, especially early on. That ability, combined with her attack speed steroid on her Q, helps her take towers and plating quickly after poking out enemies, allowing Tristana to draw large amounts of pressure in the early game.

The buff to Rocket Jump allows Tristana’s already oppressive early game against melee champions to become even better. The damage boost means that with Ignite and Press the Attack, there’s always the imminent threat of an all-in. Her level two or three engage pattern can even scare off a number of mages that simply can’t trade back with her explosive damage early, meaning she has free reign of the lane for a long period of time. Once she gains access to her ultimate, Tristana is even scarier. Buster Shot is a base 300 damage nuke, effectively allowing Tristana to win almost any trade if she plays it decently.

Jumping for joy (and kills)

Watch as Caps just blows up the enemy Karma. SK Gaming’s mid laner Choi “Pirean” Jun-sik seems pretty safe — he’s under tower, he’s playing Karma, and his jungler is right behind him. In most situations, Pirean can safely clear the wave and recall or otherwise set up a gank onto Caps. But he doesn’t expect Tristana’s damage. Caps zeroes him out before the Olaf can even walk down to help, and with the reset on his jump due to the kill, there’s no way Caps can die if Olaf does show. That’s the power of the Tristana.

Against 100 Thieves, Hauntzer goes for what looks like a massive int play. He jumps headfirst into Kled and Skarner without any immediate backup, and almost dies instantly for it. But he’s able to survive, and once he takes down Skarner he can jump back out and be entirely safe. While most champions would trade one-for-one at best in the scenario, Hauntzer is able to get the kill, jump out, and set up his team for the Kled kill as well later on in the fight. Tristana’s combination of burst and slipperiness makes it tough on the enemy team to lock her down.

Tristana has evolved into a strong solo laner that also scales well into the rest of the game, meaning there’s not really a point where she’s exceptionally weak. While most marksmen are weak in the mid game, Tristana accelerates herself past that point with solo experience in the mid lane and by purchasing Blade of the Ruined King first. With it and a Zeal item, Tristana’s two-item spike is still good, since unlike other crit-focused marksmen she doesn’t need to rush the Infinity Edge, a weak first item.

Expect to see more Tristana in professional play as more teams catch on to her power. Meanwhile, take it for a spin in solo queue and watch as your enemies (and their Nexus) explode. Tristana’s not a difficult champion by any means, so most players should be able to find some amount of success on her.