How to play Teamfight Tactics, League of Legends’ autobattler game 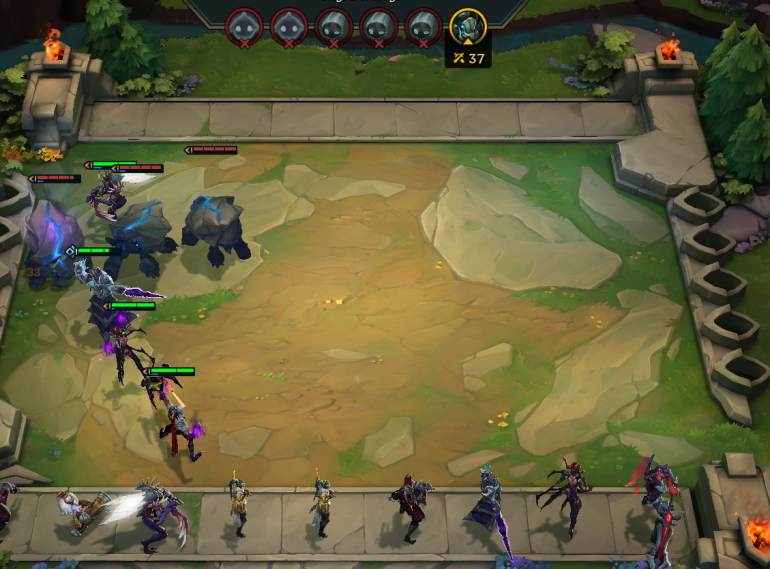 Riot Games now has its own autobattler game inspired by Auto Chess, called Teamfight Tactics. The company added it inside the League of Legends client as a new game mode instead of a standalone title, and players with access to the Public Beta Environment can already play it.

But the announcement and release of Teamfight Tactics might seem to have come out of thin air for some League players, specifically those who have little idea of what an autobattler game is. Riot’s new game is a great place to start.

Here’s an overview of the game’s main mechanics.

In Teamfight Tactics, eight players face each other in several one-on-one rounds. They do so by choosing League of Legends champions from a pool of five that rotates every round, and players can place these champions on their side of the board to fight an opponent. Every round, you’re either teleported into an opponent’s board or an enemy is into yours. Then, champions fight each other automatically.

You can bench champions if you recruit more than your board can hold.

The winner of each round deals damage to their opponent’s tactician, called a Little Legend. They have 100 health each, and they only take damage if they lose the matchup. The higher the level of the champions on the winner’s side of the board, the higher the damage they cause on Little Legends. As usual, reaching zero health points makes you lose the game.

Teamfight Tactics features 50 League of Legends champions. They use their auto attacks and their unique skill to deal damage, and they move on the board differently.

Each one has an Origin and belongs to a Class. Combining different heroes from the same Origin or Class on your board will activate special effects known as synergies, which will give them bonuses once a fight starts. Combining heroes that share the same Origins and Classes is one of the ways to have a strong board and win in Teamfight Tactics.

Teamfight Tactics rounds can be split into three stages.

The first is the recruiting stage, which players use to select champions from the pool they’ve received. Players can refresh the pool by spending gold, upgrade champions if they get three copies of them, and place champions on the board.

The second is the battle stage. Players have no control over what happens at this point, and champions will battle automatically against each other. The battle ends when one player loses all their champions.

The third and last stage is a waiting stage. Players who have finished their matchups wait for combats in boards of other players to end. After that, the recruiting stage starts again in another round.

Players can buy and sell champions at any stage, but they can only deploy and upgrade them in the recruiting stage.

Every player has a level on their Little Legend. The higher their level, the more champions you can place on the board and the higher their tier in your recruiting pool. You earn little experience after each round, but you can buy four experience points for four gold.

Gold is one of the resources players can use in Teamfight Tactics to add new champions to their roster or buy experience points. Players earn them by playing rounds, getting win or lose streaks, and earning interest.

Players can get additional gold every round as interest for the amount they have. They earn 10 percent of the gold they have after the battle stage ends but before they earn gold for that stage. The number is always rounded down, so players with nine gold get zero interest after the battle stage ends, and players with 10 get one. There’s a cap of five gold per round players can get from interest, which means it’s pointless to try to have 60 or more gold after a battle ends.

Players can equip their champions with up to three items, which they can find by defeating monsters in neutral rounds. These items can be combined to form stronger items and devastating combos.

Once a champion is equipped with an item, the only way to remove it is by selling the champion. The player will keep the item and can use it on another character.

Teamfight Tactics’ uniqueness in the autobattler genre is in its draft rounds. Players are offered a carousel of champions with pre-equipped items, and players with the lowest health choose first. You can use that to grab an item or champion you want, or just to deny an opponent a strong pick.

The game is a mode inside League of Legends. You must download League first and select Teamfight Tactics from the modes menu.

At the moment, Teamfight Tactics is only available for players with access to the PBE. Riot expects to release it to all League players in the 9.13 patch on June 25.