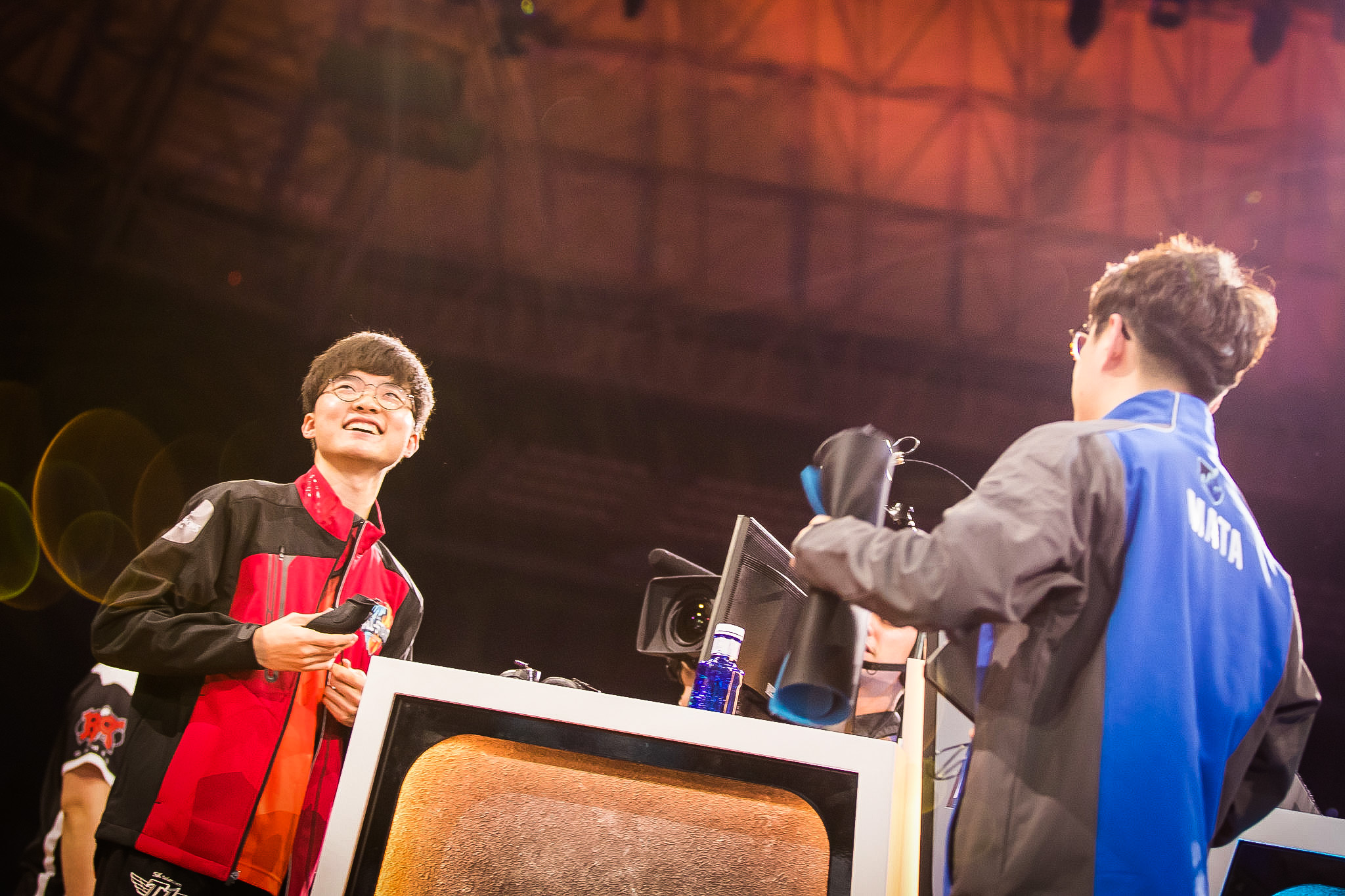 When you think about the legends of League, the first two names that come to mind are Lee “Faker” Sang-hyeok and Cho “Mata” Se-hyeong. For years, these two titans danced around each other in a balletic, understated rivalry. But until this year, few thought we’d get the chance to see them perform a duet together.

What they’ve produced so far in 2019 is pure art. Sure, there were some growing pains as they learned how to coexist under the T1 banner. But in the LCK Final against Griffin, their leadership summoned the best possible performance from the team, rousing the troops to a clean sweep over league-leading Griffin.

They head to the Mid-Season Invitational with one goal in mind: win the trophy for Mata. It’s the one major League trophy he has yet to win—Faker and SKT denied him that right three years ago. Now they have the opportunity to take home the title together.

Back in the early days of organized League in South Korea, it was Mata who starred first. He and MVP Ozone beat SK Telecom T2 in the semifinals of Olympus LoL Champions Spring 2013, the first of many encounters between the two.

But even though it was Mata that took home that title, all the talk was of Faker. Fans marveled at SKT’s teenage phenom, at his mechanical prowess and the daring abandon with which he played. Some surely saw greatness in him that day.

Faker didn’t disappoint. He and SKT beat MVP in the summer playoffs, qualified for Worlds, and then won it. This was back when South Koreans winning at international events was not a given—a striking resemblance to the environment the two face today.

A year later, Mata won his own Worlds with Samsung White, who are regarded as possibly the greatest team ever and the only rival to the greatness of Faker’s teams. But then Faker found his footing again, taking home a slew of titles in 2015.

That set up a fateful encounter between the two at MSI 2016. Mata had been recruited to legendary Chinese team Royal Never Give Up, and at the tournament, RNG raced out to a huge lead in the group stage while SKT unexpectedly struggled, losing once each to CLG and RNG and twice to Flash Wolves.

But once Faker and company figured out the MSI meta, it was over. When RNG and SKT met in the semifinals, it was a convincing 3:1 decision in favor of SKT. Mata was always second to Faker in the dance between legendary players.

At the time, we thought we might get more battles like that between the two legendary players. We did, but they always went Faker’s way. Mata joined the KT Rolster super team in 2017, but lost in both LCK playoffs to SKT. A fresh start for Mata was marred by his team’s inability to overcome their biggest rival.

Even when KT finally won it last year, they did so during a down year for SKT. KT never truly beat their rivals and, in a way, paid for it at Worlds where they were beat by IG in a spectacular series.

It seemed like, after so many close calls, we’d never see Faker and Mata truly clash in epic fashion, or for Mata to come out on top. But while we rued the missed opportunities, the two legends had a better plan: team up.

The two grizzled veterans are very different from the versions we first saw in 2013, or even the championship editions from 2016. They’re older now, wiser. Mata isn’t a mechanical marvel anymore, and his engage sense can be off sometimes. But he’s amazing at keeping his carries clean and can still start the exact fight that SKT need.

Faker too isn’t the showy teenager he once was. He’s shelved his assassin pool for a steady diet of wave-clear mids with teamfighting potential and enough safety to be picked blind. He plays for his team more these days than the other way around. With the array of talent that T1 have put around them, this is the right way to go.

Now they have an opportunity to lead those players to a place only they’ve been to: the top of an international competition. That it’s the one that Mata has yet to win has to be extra motivation. Ideally, they’d do it by downing the same IG squad that ended Mata’s Worlds run last year and prove that they are, without a doubt, the best team in the world. Do that, and they cement their legendary status in the eyes of a whole new generation of fans.

A lot has changed in League of Legends since Faker and Mata played each other in that playoff series six years ago. Many great players have come and gone, and yet these two legends remain. And their combined will to win may never be greater.