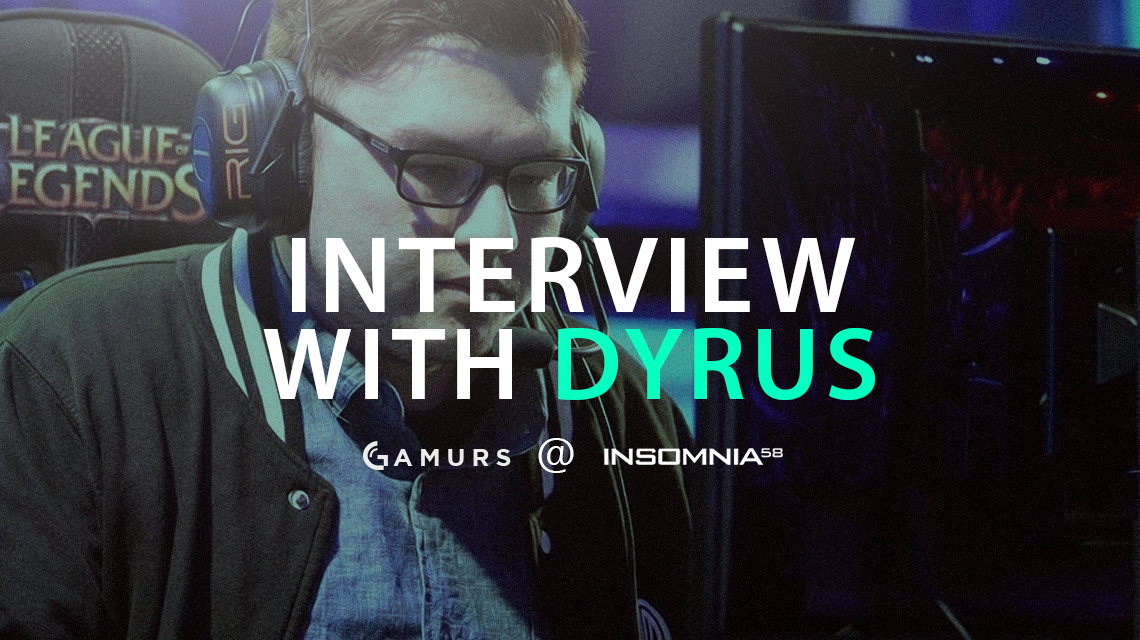 I had the absolute pleasure of sitting down with former Team SoloMid top laner Marcus “Dyrus” Hill this weekend at Insomnia to discuss all things TSM. Below contains a word-for-word account of the interview that took place. Here is what he had to say.

So, TSM is going to Worlds and it’s a home turf Worlds in North America. What do you see as their prospects? Do you see them getting out of the group stage or just making it as far as the semifinals?

Dyrus: I think a very accurate thing to say is that this is the best TSM yet, and we will see where they are at as we play against, I mean as they play against each other. But for now, it’s very hard to say because Korea has always been on top and then after it’s all other regions, but NA has been struggling in where– I think that NA teams play a lot better against each other but when they play against other teams, they have trouble adapting. So I think with the addition of Immortals and on top of that C9 bringing in a super strong roster and a super strong coaching staff, I think that NA has gotten much much better from before. It is not an understatement. Like if you were to take NA as a joke in past years, then a lot of people would have to reconsider

So that’s the three you think will represent North America at Worlds then: Immortals, TSM and C9?

Dyrus: I mean, it is going to be TSM and C9 probably… for sure. As for the other two, I would be fine with either one. I think Immortals is the better team, but I feel CLG has more experience together, so it’s like really really tight, but either one is probably going to be fine I think. I feel NA is going to have a bigger showing this year than the other years.

Yeah, I totally agree with that. Just as you said, this is the strongest TSM in a long time. Do you believe then that Hauntzer is a good candidate as your successor to the top lane throne and to continue on your legacy?

Dyrus: Erm, it’s not so much about my successes but its more about the jungle and top synergy and I feel like when I played against Hauntzer, he was the person I had the most trouble with. But even so, when we played against them in playoffs, we pretty much ran them over and that all comes from coaching staff, team synergy and all those other factors. You can’t just solo carry games anymore and the fact that he was able to learn to have more map awareness and to avoid first bloods and avoid all the deaths thats like, that’s really good because for me as a player, I just got stuck at a wall where it was much harder for me to adapt and harder for me to learn. Pride would start to get in my way as I got much older, so it’s not that my mechanics got worse, they were always kind of similiar but not really the greatest, but it was harder– it was much more difficult to relearn things as the patch always changes, especially before Worlds.

It’s not like I was a super terrible player, I just didn’t work with my teammates well enough. I was the veteran player and i did not lead them, I have bad communication skills but even so, I was able to get a Pentakill on Rox Tigers in a scrim with Darius. I’ve been able to kill players multiple times, I’ve been able to solo-kill all these other top laners, but never on stage, because one, I choke on stage, get nervous, team plays worse and that all comes from team synergy and the coaching staff. Little things like getting a back massage, talking to sports psychologists, that stuff is really huge and I think with what TSM has right now, they are in a really good place.

That’s interesting, because there’s obviously a lot of hype around this TSM team with their overwhelming domination in the Summer Split. So how do you see this match tonight between TSM and C9 going? Do you see TSM winning straight out or do you feel C9 might have a chance to steal that top seeded spot?

Dyrus: Well, we recently just moved to a recent patch so the matchup has gotten a lot closer, but what I believe happened is that TSM and C9 probably scrimmed each other; that’s usually how it went. For example, we scrimmed against CLG the last year and it’s all about mind games at that point. It’s not really about how good the team is together, but how good you can adapt and how you can handle things mentally and I think C9 is a really strong team when it comes to playing mind games and they have really strong team members that won’t fall to pressure. They won’t fall to mechanics from Berg or Hauntzer because Impact and Jensen are just as good in terms of mechanics. They have a really solid jungler, Sneaky’s a god of bot lane and they have two supports who challenge each other, so individually, C9 is just as good as TSM. But as a team, TSM is a bit more ahead as they have had more time together. But I just basically say 3-2 (TSM). I say 3-2 as if it’s 3-1 or 3-0, then there must have been some kind of fluke or something must have gone really wrong for them, but either team will have a score like that.

Well, moving very swiftly ahead now, you obviously retired last year in an emotional send off right here in Europe. So where do you see yourself in the future? Do you see yourself as a coach for TSM or do you just want to continue streaming as you have been doing?

Dyrus: So I definitely needed the year off. I noticed a lot of my mistakes in competitive play, a lot of them were really simple. If someone had just told me it was that simple, I think I would have been a much better player. But, I don’t have the motivation and I don’t have the tolerance to become a pro player again. Coaching is even more difficult as I’ve seen it happen; I’ve seen teams fall apart because coaches can’t hold them together and it’s very difficult to become a coach depending on what kind of resources you have, so I don’t want to do that. But, the one thing I did want to do on the side is just watch scrims and see if I could help them at all and I’ve only watched one set of scrims and given them some of my point of view and it’s basically the same thing that the coaches tell them because they’ve been through it all this time and what I see is what they see. So, I don’t need to be a coach or analyst, I can just try to educate my viewers as best as I can and I can just try to become an entertainer, a streamer and a YouTuber.

So just be Dyrus?

Haha. So, last thing. I have always wanted to ask this personally to you if I ever got the chance. Why did you choose to play Singed so much in the early stages of your career? What is the whole reason you were known as the Singed player?

Dyrus: So I got a really lucky play. I think it was against sOAZ, who was playing Irelia, and I was just laughing under tower as I thought I was going to die and Singed was horrid against Irelia back then because Irelia was really OP. But I saw someone play Signed in Season One just one-versus-five everyone and I thought: I just got to play this champion. So Singed became my comfort pick after Jax and that’s how it came to be, but it was really rare for me to pick Singed as I felt he should lose to so many champions. I never thought about the solution of how to make him work and that also leads into why I am retiring because I can’t be unique. I can only end up copying other players and that’s why it’s not fun to adapt.

Well that’s all for my questions. I want to thank you for your time today and hope you continue to enjoy the event. Enjoy Insomnia58 and have a lovely time in the UK.

Do you think that TSM has a good chance to win Worlds this year? Let us know by commenting below or tweeting us @GAMURScom.

Dyrus was speaking at the first League Fest, a three-day festival featuring a live Pro Am tournament, opportunities to meet some of the top League gamers and the UK’s biggest cosplay competition