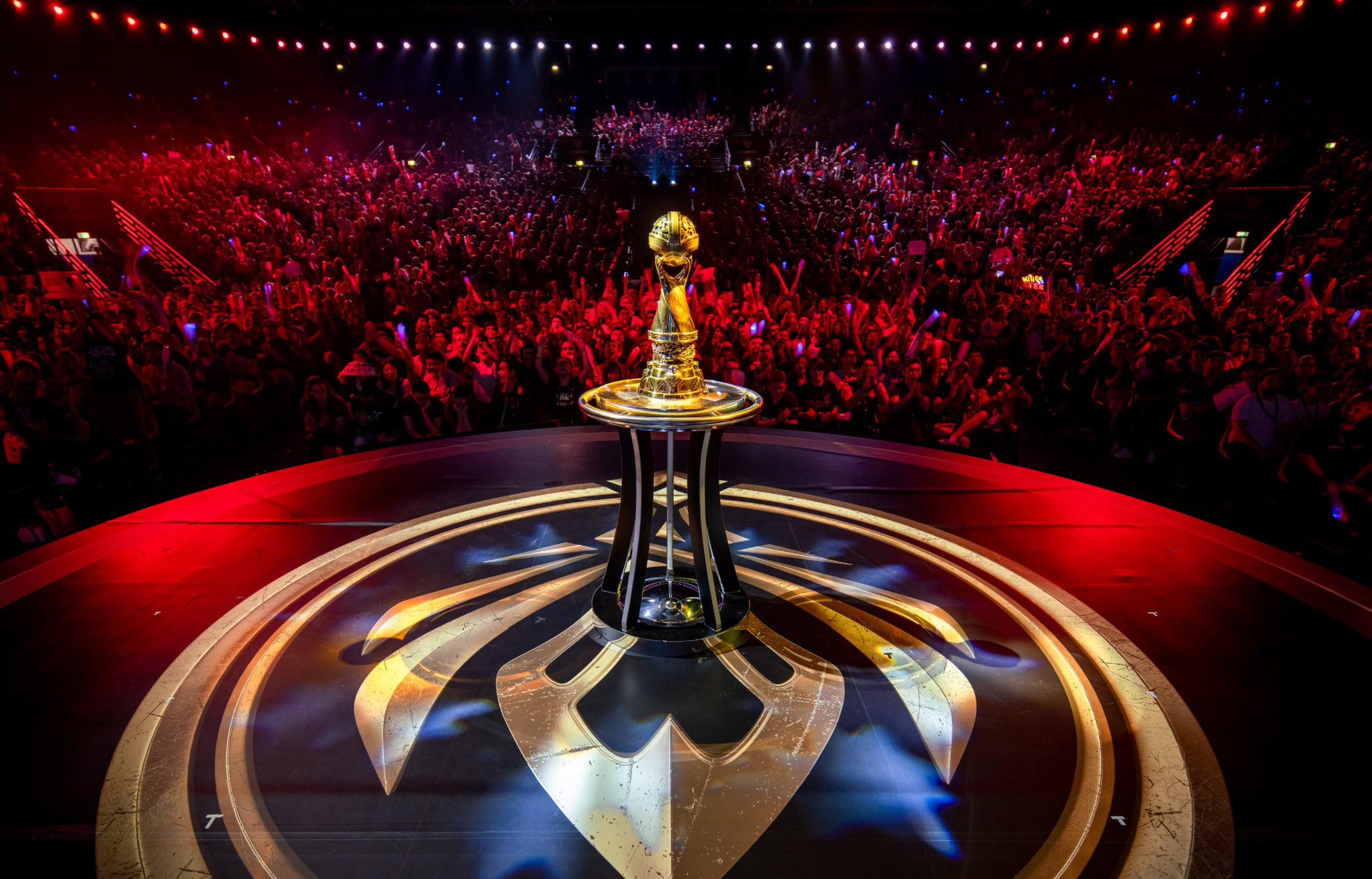 The halfway point of the 2021 professional League of Legends season is upon us. This year’s Mid-Season Invitational won’t feature as many teams as usual—largely because of COVID-19 travel restrictions—but the teams that will be in attendance are packed with talent and sure to make some noise.

The season’s first international event features 11 squads from across the globe, with each of them bringing their own unique style and flair to the table. From storied organizations with past MSI titles such as Royal Never Give Up, to defending world champions like DWG KIA, the best of the best is set to face off at MSI 2021.

Here are our 2021 MSI power rankings.

Pentanet saunter their way onto the international stage in the wake of a dramatic exodus of Oceanic talent after changes to the LCS’s import restrictions. Of those who have stuck around, Pentanet is undoubtedly the best, having dropped only four games throughout the entirety of the spring season. But they’re an almost entirely untested force on the international stage, with top laner Brandon “BioPanther” Alexander being the only member of the roster with international experience at Worlds 2018. With the VCS’s representatives dropping out due to visa restrictions, Pentanet now have a one in three chance of making it out of the group stage. But with so little data regarding their potential, it looks like they’ll merely be a hurdle for Royal Never Give Up and Unicorns of Love.

We don’t have necessarily high hopes for Infinity Esports. It took a dramatic reverse sweep for the eventual Latin American champions just to secure their ticket to MSI. Despite the team’s qualification for the tournament, Infinity’s not-so-clean play at the back end of the LLA playoffs is a bad omen moving forward into matchups against titanic Group C opponents like Cloud9 and DWG KIA.

Longtime TCL veteran Anıl “HolyPhoenix” Işık is attending his first international event in nearly seven years. The last time he represented his region on the global stage was at the 2014 World Championship, where his Dark Passage squad failed to win a single game at the group stage. Our expectations for the FastPay Wildcats are a bit higher than a winless outing at MSI 2021, but we’re still not expecting a groundbreaking performance from this dark horse team.

This will be DFM’s fourth appearance on the international stage, as they’ve represented the JLJ at two World Championships in 2018 and 2019, and one MSI in 2019. They would have represented their region again at MSI 2020 had the event gone ahead, and now they’re finally back in the global spotlight for their region.

The player to watch for this roster is mid laner Lee “Aria” Ga-eul. New to Detonation FocusMe this year, he’s put out some incredible stats throughout the course of the Spring Split, including a KDA of 51 on Seraphine and 30 on Syndra, according to League stats site Games of Legends. But whether he’ll be able to pull off the same levels of performance against the RNGs and DWKs of the world remains to be seen.

You will hear two words in reference to CBLOL stalwart org paiN Gaming at MSI this year: “momentum” and “ceiling.” The momentum side of the conversation is relevant because paiN started their split with a hugely disappointing 2-5 record before going supernova and winning nine of their next 11 games. PaiN won four games in a row to end the split, sneaking into the playoffs as the five-seed and reverse-sweeping their way out of the first round en route to their first title since 2015.

You will also hear two players mentioned over and over: AD carry brTT and mid laner Tinowns. Despite the former being 30 years old and the latter just 23, both have been playing professionally since 2012. And that’s where the word “ceiling” will come in. This roster has so much experience, both domestically and internationally, and the chips on the players’ shoulders get heavier and heavier every time they go to an international tournament under a different Brazilian banner only to get bounced in the first round.

Individually, brTT, the most decorated player in CBLOL history, has aged like a fine wine. He posted a KDA of 4.5 across the regular split and playoffs, and mid laner Tinowns notched a mark of 8.3 over that same span. What can give Brazilian fans additional hope is their players’ champion pools. Especially on the new Patch 11.9, the fact that Tinowns has played 13 different champions and top laner Robo has played 16 in the midst of one of the most stale metas in the esport’s history means one sneaky pocket pick could be the difference in a wide-open Group B.

Fan-favorite CIS representatives Unicorns of Love are back, and they’re looking stronger than ever. They’ve been the CIS’s Worlds representatives for two years running, and in 2020 they fought their way to the group stage for the first time in the organization’s history. Their player to watch is mid laner Nomanz, who is famous for his Kassadin, but remarkably proficient on the control mages like Viktor and Orianna that have been dominating the current meta.

He’s not been afraid to pull out the Kassadin in his domestic region, though, and currently holds a 100 percent win rate and 33.0 KDA in his three games on the champion. Although it’s unlikely that the Unicorns will be your MSI 2021 champions, their aggressive playstyle makes them the team to watch when it comes to potentially upsetting the standings.

Don’t sleep on the PCS representatives. Throughout the 2021 Spring Split, PSG Talon put up one of the most dominant displays in the region’s history. They only lost one game, including the playoffs, and by the end of the regular season, had a monstrous team KDA of 3.48 with 345 kills in 19 games. They had a massive average gold difference of 3,440 at 15 minutes and an average game time of 27.8 minutes, which is the fastest in the league by far, according to Oracle’s Elixir.

The only problem is that their powerful starting AD carry Unified can’t attend the tournament due to health issues. Replacing him will be the second-best ADC in the league, Doggo, but they’ll need to build synergy with this new member quickly.

After getting their chance to represent North America taken away by COVID-19 last year, Cloud9 are finally heading to MSI as the best team from the LCS. Eyes will be on superstar mid laner Perkz, who is the only player from the championship-winning G2 Esports squad coming back to defend his title. The team has plenty of individual firepower to stand up against some of the best, but it’ll be their teamplay that’ll be put to the test when the tournament kicks off.

Granted, their performances in the 2021 LCS Spring Playoffs left plenty to be desired. But there are still plenty of positives to look forward to, whether it’s Fudge constantly improving his play, Zven and Vulcan putting up consistent performances in the bottom lane, Blaber playing aggressively and smartly, and Perkz continuing to elevate his teammates.

The MAD Lions are the feisty, meme-loving younger brothers of the LEC, but don’t let that fool you into thinking they don’t mean business.

This year was full of swings and roundabouts for this roster. They made it to Worlds in their first year of competing only to become the first European representatives to not make it out of the play-in stage. That underperformance resulted in roster changes in the jungle and top lane roles, and since then the team has been on a reign of dominance in the LEC.

They took down the LEC’s most internationally successful organization of all time in G2 Esports and kept their cool to calmly reverse-sweep the Spring Finals against Rogue. They’re a multi-threat roster with carry potential in every single role. The stars of the team are jungler Elyoya and support Kaiser, whose coordinated map movements and incredible engages were one of MAD’s greatest assets throughout the LEC playoffs.

The only remaining question mark around MAD’s MSI potential is their ability to withstand the pressure of the international stage. Their roster is young, and with youth often comes nerves—especially when you’re staring down ShowMaker, Xiaohu, and Perkz on the other side of the Rift. But in an interview with the Critical Strike Podcast, ex-MAD community manager Stress revealed that mid laner Humanoid’s imperviousness to pressure has been a huge asset for the team. Here’s hoping he can calm the team down in some of those clutch moments, and MAD might just be able to pull off an upset against our top two.

2) Royal Never Give Up

No franchise has gone through higher highs and lower lows in the last four years than Royal Never Give Up. No one gave Uzi’s old team a snowball’s chance at the start of the split, but converted mid laner Xiaohu has brought Perkz-esque flexibility into an off-role, and Ming is playing some of the best League of Legends of his storied career.

GALA has blossomed as Ming’s lane partner under the support’s veteran leadership, but he’s not trying to be the next Uzi, nor do RNG want him to be. Where Uzi was the face of the old RNG and their playstyle (and to much success, to be fair), RNG are more diverse and play the current meta very well. Xiaohu has gone from liability to centerpiece, and isn’t afraid to bust out mages in the top lane like Syndra and Orianna.

If there is a cause for concern, it’s Cryin in the mid lane. Not because he’s not up to snuff—far from it—but he’s considered the weakest link in this squad. As long as he can play safe and controlled, RNG’s jungle/support duo will take care of the rest. The trouble for RNG has come when teams attack the pillars of the team as opposed to the carries. The new meta might also be a worry for RNG given their relatively controlled, meta-married playstyle, but that’s a question that will only truly be answered once games start on Thursday.

There isn’t a single team at MSI 2021 that holds a candle to DWG KIA. Somehow, the defending world champions look even better than they did during their dominant 51-8 stretch to close out last season, as core players such as ShowMaker and Canyon appear more mechanically crisp to the naked eye, while the ever-steady bottom lane duo of Ghost and BeryL continues to up its game as the best weak-side-playing duo in the world.

Additionally, the re-emergence of former LCK All-Star Khan has made the loss of Nuguri sting a whole lot less for DWG KIA. Khan’s 4.0 KDA during the LCK Spring Split ranked second among all top laners, according to Games of Legends, while his position-leading DPM of 502 proved to be an incredibly useful addition to the already dominant and unrelenting presences of the team’s established carries.

If Khan and the rest of the DWG KIA can all play as well as they have throughout the course of the LCK Spring Split, there should be little to no doubt that the team can walk away from Iceland with the MSI trophy in hand. Convincing stellar play against star-studded teams like Gen.G and Hanwha Life back on the homefront should translate well into international games against minor region squads and other lesser contenders.