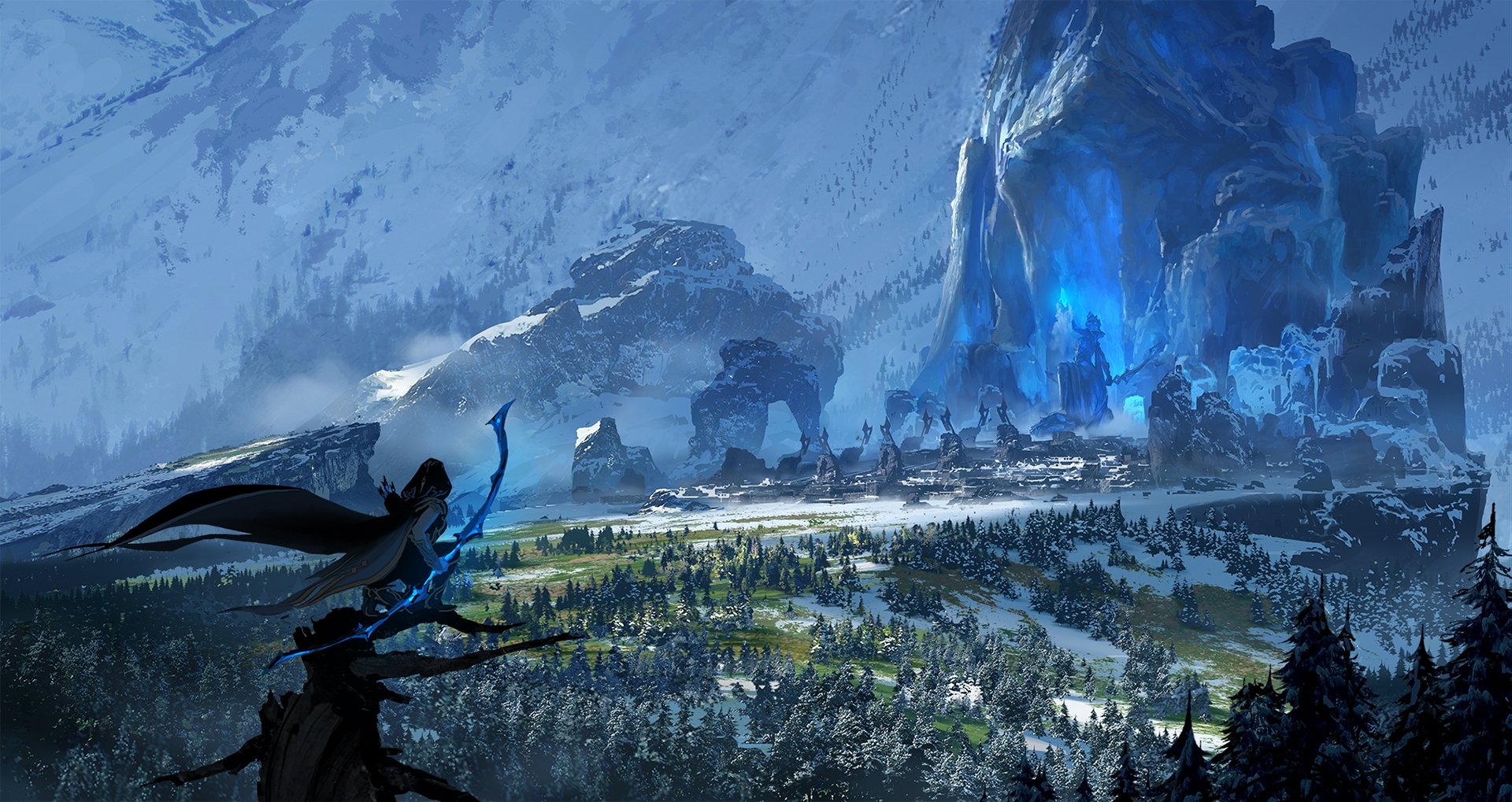 The vast League of Legends universe and lore are among the game’s most important and unique features. You can always play League without knowing anything about it, because it will not affect your gameplay. But you will probably be missing out on great stories.

Arcane’s success and widespread acclaim among fans and critics alike, for example, proves the universe Riot Games has created with Runeterra has enough depth and potential to expand the borders of the games—and bring new players in. The Netflix animated series is set in the twin cities of Piltover and Zaun, that make up one of the several known regions of Runeterra.

In the other regions, you will find an unforgiving desert, isles shrouded by a dark mist, a pirate city, and even a frozen land where chaos reigns.

That land is the Freljord, the northernmost region of Runeterra.

It is “a harsh and unforgiving place—where the people are born warriors, who must persevere against all odds,” according to Riot. It is home to ancient tribes, mysterious creatures, old gods and powerful ice magic, as well as 14 of the game’s more than 150 champions. Most of them are classic or well-known characters.

Legend says Anivia, one of the Freljord’s demigods, appears to people in the form of a winged spirit. She has witnessed the dawn and downfall of countless mortal civilizations, and her presence is often regarded as a bad omen or the start of a new era. As long as the Freljord exists, she will too; she will always be reborn if she dies.

In League, Anivia is a mage that is easy to learn, but hard to master. She manipulates the air and uses her ice magic to chill enemies, causing effects like stun and slow, as well as create physical ice barriers in the map. The champion is commonly used in the mid lane or as a support.

After her mother’s death, Ashe decided to follow her steps and continue the mission she was working on at the time. An old map took her to the supposed grave of Avarosa, where she found the magical bow of True Ice, a perfect match for someone who was born with the rare ability to wield such a powerful weapon. But she used it to protect the weak, which led her to become the leader of a new tribe formed by these people, the largest that the Freljord has seen in many generations.

Ashe is one of League’s classic marksmen and starting characters. She mainly uses basic attacks, while her skills take advantage of the frost magic to add utility. From a hawk spirit that can reveal hidden nearby areas to a freezing ultimate that stuns enemies across the map, her versatile skills make her a valid asset—while also being friendly to beginners. She is mostly used as an AD carry in the bot lane.

Braum, the Heart of the Freljord

For Braum, all tribes in the Freljord are a family—a lesson he learned from his mother, who saved countless lives. He is, like Ashe, one of the Iceborn, known for having ice powers. He also uses that power for the greater good. With time, he became a hero, having his feats turn to legends, and a positive figure for the people. When the Freljord finally becomes united as one, his dream is to retire and live as a humble poro hoarder.

In League, Braum is a support champion. He offers a mix of physical protection, like jumping in front of his allies or protecting them with his magical shield, and utility, like stunning and slowing enemies. Although he is a melee champion, he is more of a defender and does not deal much damage, which is fitting with his backstory, so it is probably better to stick with the support option.

Gnar comes from a different time, when the Freljord was not yet the icy land it is known as. Back then, the energetic young Yordle was not the only one of his kind, and lived among bigger creatures and immortal beings. He was a skilled hunter and his most prized possession was his boomerang—a drüvask’s jawbone. But after the first time he transformed into an enormous monster to protect his friends, Gnar ended up frozen in True Ice, falling asleep for millennia. When he awoke, the world had completely changed.

As a playable League character, Gnar is a unique fighter. His gameplay incorporates elements from his story, mainly the transformation into an enormous monster, which happens when he gathers enough rage. In the form of regular Gnar, he uses his cherished boomerang to attack from afar and can move and bounce around faster. As Mega Gnar, the monster, he turns into a slower, but stronger, melee attacker.

It was in search of the purest arctic water for his perfect ale that Gragas got to the Freljord. He loves fighting and drinking, mostly the latter, but still has not found a drink strong enough to get him drunk, so he vowed to create his own. In his new land, he is already considered a hero, because his brew was good enough to turn an imminent war into a friendly drink at a bar.

In League, Gragas is a fighter that is mostly used in the top lane, but is also flexible enough to be played in the jungle, mid-lane, and as a support. He carries a cask of his beer, which he can hurl at enemies to deal damage and drink to get empowered or heal himself.

After the Void erupted into the mortal world, Lissandra had to give up all that she cared about—both her sisters and the Watchers, who she had allied with—in order to survive. They constantly appear in her dreams, reminding her they are only frozen in a deep slumber and might come back if her elemental power ever ceases to be enough.

In the game, Lissandra is a mage usually picked as a mid-laner. She uses the power of dark ice to damage, root, and slow enemies. Though she is a ranged mage, a few of the champion’s abilities also affect her own movement and placement: one brings her closer to enemies, while other freezes her in place and makes her invulnerable to damage.

Nunu & Willump, the Boy and His Yeti

An unlikely duo sets out on an adventure: a boy who lost his mom and the last magical yeti of the Freljord. Betrayed by Lissandra, the ancient creature finds hope again after crossing paths with Nunu, giving him the power that remained from his people. As for the boy, he will hold on to his new friend and try to find his missing mother.

Mainly used in the jungle, Nunu & Willump are a tank duo who deal magic damage. Their attacks are themed around ice magic and their snowball fights, slowing down, rooting, and knocking up enemies. Willump also heals by consuming enemies like minions and champions.

Olaf does not fear death. In fact, he actively seeks it, one reckless battle after another. But death seems to not be in the cards for the berserker, who enters a frenzied state and always emerges victorious. Whether it’s legendary monsters or warrior tribes, no one can stand in the way. Then one champion offers to find him a glorious death, if he can help her conquest.

One of the essential fighters in League, Olaf works primarily as a jungle pick, but can also appear on the top lane. His gameplay is quite simple and borrows from his lore: skills grant him attack speed, extra power, resistance to damage, and invulnerability.

Ornn, the Fire below the Mountain

A reclusive demigod, Ornn is the eldest among them. He lived under a dormant volcano and worked day and night as a blacksmith, forging legendary weapons and artifacts. After a fight with his brother destroyed most of the population he knew, his guilt made him even more reclusive. But now it looks like a good blacksmith is needed, and he is back to join the fight.

Ornn is also a tank and appears mostly in the top lane. He is a unique character with the ability to create more powerful versions of certain items for his allies, and some of his skills follow the volcanic theme of his lore. And he can summon an elemental that knocks up enemies too.

Sejuani, Fury of the North

The Winter’s Claw tribe went through its fair share of hardships after being abandoned by the Iceborn warmother Kalkia, Sejuani’s mother. When she took control as warmother, Sejuani brought their reputation back as a brutal and terrifying tribe. Accompanied by her loyal drüvask named Bristle, she will not stop until she is the only ruler of the Freljord.

Sejuani is also a tank, mostly played in the jungle and the top lane. Her flail made of True Ice is her main weapon, used to damage, stun, and frost enemies who cross her way. Bristle gives her the ability to charge forward, dealing damage and knocking opponents in the air.

Trundle’s warband took him for a weak and foolish troll, and, after a plan that was not that well-received, they threw him away to survive on his own. Which he did. Things turned around after the Ice Witch gifted him the Boneshiver, an ice club filled with magic, which he then used to defeat his former leader and become the king among trolls.

A fighter mostly used in the jungle and top lane, Trundle benefits from the speedy health recovery of the trolls. With his skills, he can recover health or steal it from enemies, as well as use ice magic for several purposes, including damage to enemies and obstacles on the map.

Tryndamere earned the reputation of a legendary warrior among his tribe. On a night when he should have died, rage took over and he was revived, then vowed to avenge the fallen. Determined to prove his worth once more, now to the Avarosans, he ends up becoming queen Ashe’s bloodsworn via a political marriage between their clans.

In League, Tryndamere is also a fighter mostly used in the top lane, though he gets some play as a mid-laner and a jungler. The fury that saved him in his story also saves him in the game: it can make him heal or become invulnerable to lethal damage.

The spirit walkers are warrior-shamans with a deep connection to spiritual magic, and Udyr is one of them. From a young age, he understood every creature that was a beast to others, feeling their emotions and understanding their howls, but this power comes with a cost. The chaos in his mind almost led him to insanity. After a tragedy takes the lives of most of his tribe, he meets a mysterious monk and seeks his help to understand and control his abilities. Now, he is back to the Freljord, his home.

Another fighter, Udyr is also popular as a jungler, with minor appearances at the top lane. His connection to the beasts comes to life in the game in the form of “stances”, each beast being a stance that grants him a certain effect.

Ornn’s brother Volibear is the demigod that represents the fury and power of the Freljord. A bloody warrior at heart, he hates civilization and wishes to take his land back to its ancient state, to a time when he was honored and feared by all. And he will go over anyone and anything that stands in his way.

Volibear is a fighter, a popular champion in the jungle and the top lane. The power of thunder is present in a few of his abilities, slowing and stunning enemies while granting him attack speed.