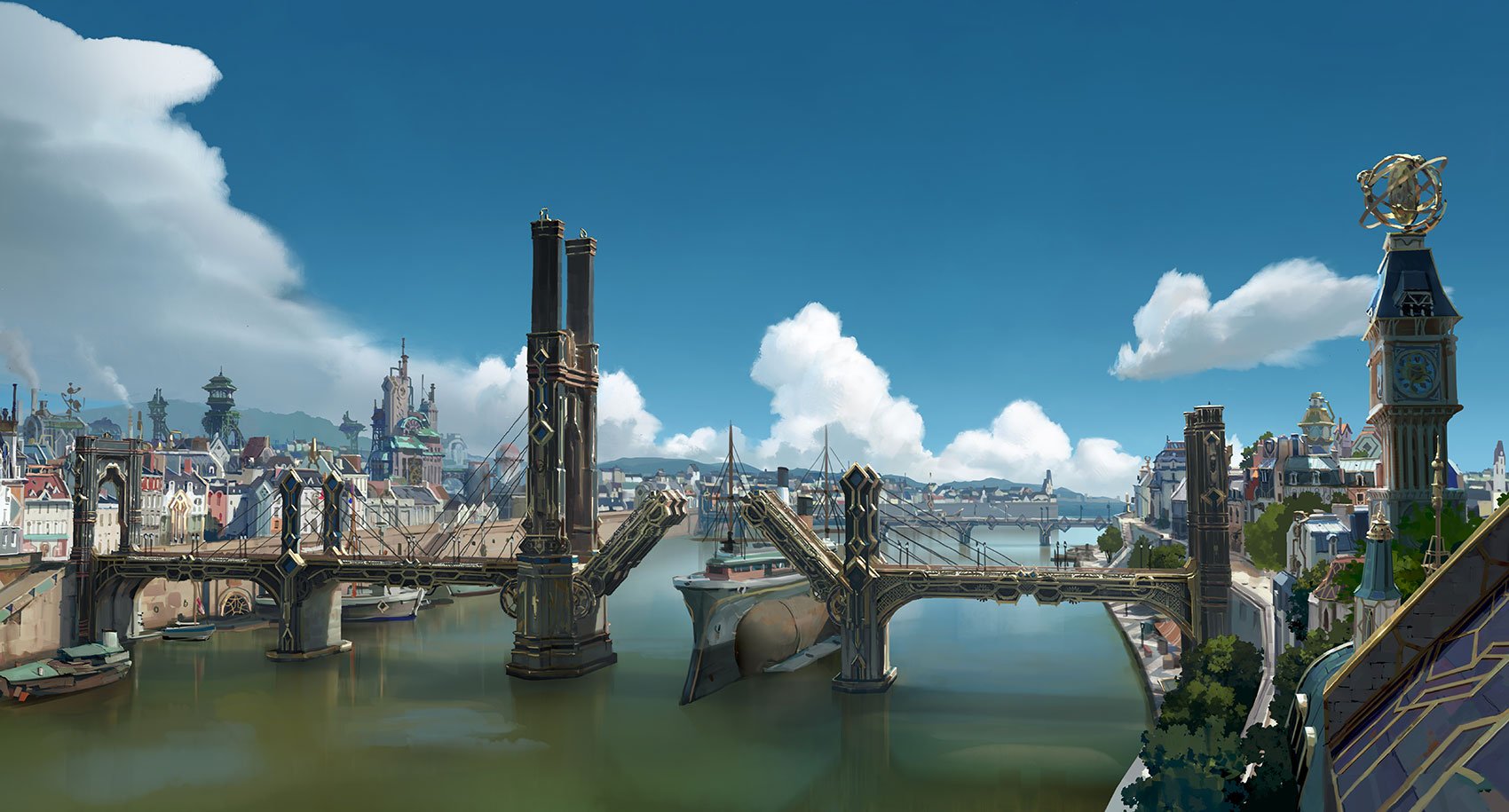 League of Legends has introduced more than 150 champions since its release in 2009. They’re mostly divided between five predetermined categories according to the role they play in the game. But beyond the Rift, League has vast lore that explores these champions from all over the world of Runeterra.

In Runeterra, there are nine distinct regions, each one with unique aesthetics, values, and stories. One of the most well-known regions in the game is formed by the cities of Piltover and Zaun. Linking the north continent with the south, the two cities thrive with commerce and brilliant minds at work.

As of April 2022, there are 22 champions in League who come from this region. We’ve listed all of League’s playable characters that originated from Piltover and Zaun in alphabetical order.

Blitzcrank – “Metal is harder than flesh”

The Great Steam Golem Blitzcrank was originally built to dispose of hazardous waste in Zaun. But he found his calling in selflessly using his near-indestructible body to help others, especially the fragile people of the undercity slums.

Caitlyn Kiramman was born to one of the wealthiest noble houses of Piltover. After rescuing her family and her city from an unknown criminal, she received an offer to become the Sheriff of Piltover. Caitlyn is one of the League champions who appears in the animated series Arcane. Her story in the Netflix series, however, is far from what we know of her from her lore.

Camille – “I bargained my soul for the progress of Piltover”

Camille is also known as the Steel Shadow, a hextech-powered death machine. She is the principal intelligencer of Clan Ferro, one of the most powerful clans in Piltover. Due to her dedication to her work as an elite operative working to maintain order for Piltover’s established powers, Camille transfigured her once human body into what she is now.

Zaun’s Mad Man is the reason why many habitants of the undercity refrain from going out at night. Dr. Mundo was a patient of Zaun’s most infamous asylum. He self-proclaimed himself a doctor after “curing” the asylum’s staff.

A true prodigy from Zaun, Ekko learned to construct simple machines before he could crawl. Using his most prestigious invention, the Zero Drive, Ekko became the boy who shattered time, exploring branching possibilities of reality to craft the perfect moment. He too appears in Arcane. But like it was for Caitlyn, what we know of him from the lore doesn’t appear to match perfectly what we have learned about his story in Arcane.

The Prodigal Explorer, Ezreal, is a dashing adventurer born from a renowned archeologist in one of the wealthiest neighborhoods of Piltover. Using a mystical Shuriman gauntlet, Ezreal escapes even the most challenging labyrinths and periculous situations that he discovers all over Runeterra.

The Revered Inventor Heimerdinger is a brilliant, yet eccentric, yordle. He’s a professor in Piltover looking to solve some of the universe’s most impenetrable questions. He can often be heard shouting “42” only to forget the question he found the answer to. He’s the mind behind some of Piltover’s lethal and miraculous machinery, but the city will begin to fear yordles and he will have to hide his fluffy appearance. A similar situation happens in the animated series Arcane, however, there are still some inconsistencies between the show and the champion’s lore.

Janna – “And you thought it was just a harmless breeze!”

The mysterious wind spirit protects even the darkest depths of Zaun, where the people call out for her help. Like a beautiful breeze, Janna appears when least expected, shielding Zaunian people from catastrophic events just to disappear like a dream. As merciful as she is powerful, Janna was given the name of The Storm’s Fury for a reason. But some have yet to discover what that reason is.

Jayce, the Defender of Tomorrow, is a modern gentleman and the personification of progress. He’s one of Piltover’s premier scientific geniuses who defends his hometown with his Hextech Hammer. Despite his title and ambition transition from the game to the animated series Arcane, Jayce’s personality and story have changed significantly in the show.

Jinx – “You think I’m crazy? You should see my sister!”

There’s no one in Piltover and Zaun that doesn’t know the Loose Cannon. Jinx is a maniac, eccentric, and brilliant criminal with a propensity toward wanting to destroy everything in her path, especially if her sister is involved. She despises boredom, and to cure her gloomy days, she unleashes chaos throughout the region. Her childish and brilliant mind is perfectly portrayed in the animated series Arcane, which gives League fans a deeper look into the mind of one of the most beloved champions of the game.

Orianna – “I know what makes them tick. I know how to make the ticking stop.”

The Lady of Clockwork was once a girl in flesh and blood with a love for dancing. After becoming ill due to an accident that happened in Zaun, she had to replace her entire body with metal artifacts. She now roams freely between the undercity and Piltover, even venturing outside the region sometimes.

Renata Glasc – “Progress comes at a price others aren’t willing to pay.”

Rising from the ashes of her Zaunite home, Renata Glasc started her empire when all she owned was her name. She built her power through decades of hard work, becoming the wealthiest chem-baron Zaun has ever known. Everything will belong to her, eventually, even her enemies.

The starry-eyed Songstress was born in Piltover to Zaunite parents. She turns chaos into a symphony, drawing inspiration from the sounds only she can hear. Seraphine has the ability to hear the souls of others, and by performing, she can resonate with them.

The Mad Chemist has devoted his life to pushing his knowledge and experiments to the brink of losing his mind. Singed rarely fails, but even his greatest success has left him with painful claw-like scars. He was another champion present in the animated series, Arcane, even if his character was not very prominent in the first few episodes of the series. He later becomes a crucial figure in the storylines of Viktor and, possibly, another champion armed with claws.

Twitch – “What doesn’t kill you just isn’t finished yet.”

Twitch is a sneaky rat of Zaun, looking for treasures and moldy sandwiches in the dumps of the undercity. Few is known about the Plague Rat, even though some might suggest he too was present in the first series of Arcane.

Urgot – “Controlling them will be simple… with my hand around their throats.”

Urgot was once a powerful headsman in Noxus but was betrayed by the empire for which he had worked. Imprisoned in the deepest prison mine beneath Zaun, Urgot was enslaved and experimented on until only a shadow of the man he once was remained. He was transformed into something monstrous, with mechanical legs and many guns fused savagely to his flesh. In the middle of it all, one can see what remains of the headsman of Noxus, the face of a haunted man.

Vi was once a criminal from the depths of Zaun. But through a strange turn of events, she has become one of Piltover’s finest. By working with Piltover’s police force, the Wardens, Vi has gained access to the technology of the city and now wears mighty hextech gauntlets that can punch through everything. Vi, or Violet, was one of the main characters of the animated series Arcane. But much like the other champions, her story was slightly changed in the show.

The Machine Herald Viktor is far from the gentle and caring character many have learned to love in Arcane. He’s an idealist who seeks to elevate humankind’s potential by fusing it with his technological advancement. The Viktor presented in the animated series Arcane is a distant representation of the Viktor League fans have known from the lore in-game. The docile and brilliant boy evolved into a lethal machine blinded by the thirst for progress. With only this bright future in mind, Viktor has also augmented his body thanks to his mechanical science.

Warwick – “Zaun gave me claws long before you did.”

Once a man, Warwick is now a monster-hunting the alleys of Zaun, following traces of blood in the undercity. His human body was transmuted with alchemy that still keeps him alive and gives Warwick superhuman strength. The uncaged Wrath of Zaun preys upon criminals who terrorize the city, much like a character from Arcane used to do to defend his people.

As the product of a toxic spill, Zac brings all the chemicals from Zaun alive. He has grown from a lifeless pool of toxins into a thinking and sentient being who dwells in the undercity’s pipes.

Zeri is a deeply compassionate and energetic champion from Zaun. The young woman uses her electric magic to help those in need. Her powers lead her to be a bright light for her community, which she cares a great deal for.

A yordle with a love for bombs, Ziggs was one of the brilliant minds of Piltover. But he soon got bored of his life. With the objective of exploring more explosive experiments, Ziggs moved to Zaun where he can express his love for bombs more freely.