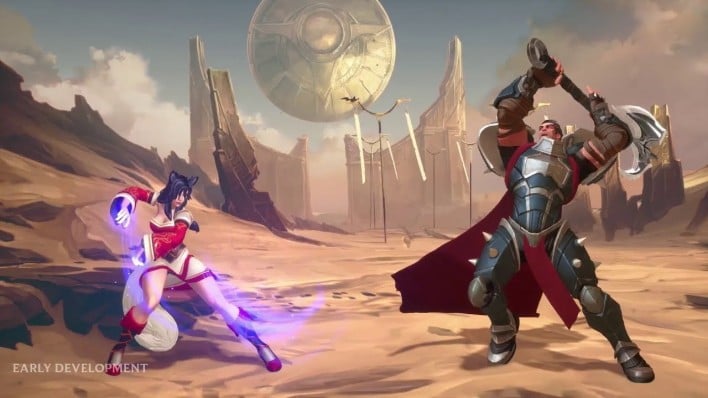 After Riot Games announced the development of a fighting game at Evo 2019, fans were excited to hear more about it during the recent celebration of League of Legends’ 10th anniversary. But Riot shared nothing more than a little bit of in-game footage of the game’s early development.

The fighting game community will have to wait longer for the details on Riot’s new fighter, which is named Project L for now. But the little footage that fans could see during the 10th-anniversary broadcast showcased some of the champions featured in the game.

Here are all of the champions that will be playable in Project L so far.

One of the champions we’ll be seeing in the new 2.5D environment of Riot’s fighting game is Darius. He’ll seemingly pick up a lot of his standard abilities, using his axe to slice enemies and dunk them into the ground.

League’s favorite nine-tailed fox was also seen in the preview footage. It’s unclear if Ahri will be able to charm opponents with her magic, though, and she doesn’t seem to be holding an orb. Instead, it seems like she’s channeling arcane energy straight from her hands.

In the early development footage that Riot shared, Jinx is only seen using her Pow-Pow gun to shoot its mini bullets and to hit enemies. Her model does show that she’s also carrying Fishbones, her second gun, but we haven’t seen it in use.

As expected, Katarina will be fighting with her daggers. She’ll be using them both to slice the enemy and parry or defend their attacks. It doesn’t seem like Katarina will be throwing the daggers similar to the way she does in League, though. Instead, it appears that she’ll fight as a melee unit.

League champions will have new skills and animations in Project L

Project L is in its early development and alpha access hasn’t even been announced to release in the near future. But from what we’ve seen so far, it’s clear that the champions of Project L will use their signature attacks from League adapted to the fighting game environment—with a few added moves, like Jinx’s melee gun-punch. Champions will need to have an entirely new set of abilities and animations for jumps, dodges, blocks, grabs, and all other movements typical to a fighting game.

The FGC is known to be a demanding community and quite a few developers have unsuccessfully tried catering to it. This is likely why Riot is taking its time to develop a proper fighter that will have combos that feel natural to experienced gamers while also being easy enough for newer players to take on and learn from scratch. At first glance, it seems like Project L might play similar to Dragon Ball FighterZ.