Hearthstone’s Patch 20.2.2 is the latest update for the Forged in the Barrens expansion cycle—and it’s arriving later today. Blizzard has shown off the details for the exact changes coming with Patch 20.2.2, which adjusts multiple cards in the Standard format and nerfs the newest minion type in Battlegrounds, Quilboars.

Of the 15 cards receiving changes, there are five nerfs that aim to weaken the top-tier decks and 10 buffs meant to help give weaker lists a fighting chance in the meta. With Quilboars being nerfed across the board in Battlegrounds, this gives other minion types a chance to punish Quilboars early before they scale up to the late game with their Blood Gem tactics.

Here are all of the changes coming with Hearthstone Patch 20.2.2. 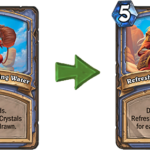 Players who want to dust all of the cards above (and Golden Mankrik) can do so. They’ll be eligible for a full dust refund for two weeks after Patch 20.2.2 goes live. 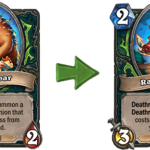 Dev comment: “We’re issuing a number of buffs in 20.2.2, mainly focused on bringing up struggling classes and archetypes. One of our goals for a meta is to provide deck diversity: not only different class options, but also attractive deck options that play markedly different from one another. These buffs follow that goal, as each one is targeted at helping out an underrepresented archetype or play pattern.” 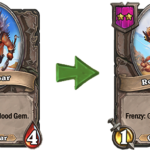