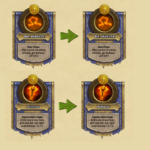 Hearthstone’s next patch, 18.4.2, will be released in two days, Blizzard announced today.

This patch is tuned mainly toward adjusting the Battlegrounds mode. It’ll bring multiple changes to both high and low-tier minions and heroes.

The patch includes one new hero and a rework to two minions, Zoobot and Menagerie Magician. Here are all the new changes coming in Hearthstone Patch 18.4.2.

What the hero changes mean for the Battlegrounds meta

Maiev was the undisputed best hero due to her ability to hunt for triples and plan around future turns with her Dormant abilities. With less bonus health on her minions, it may force her to play a more standard curve to not fall behind too early when snowballing. Ragnaros’ nerf will make him nearly unplayable since the cost to obtain Sulfuras has increased by an extra five minion kills. In addition, Sulfuras’ effectiveness has been heavily reduced, now only giving +6/+6 in bonus stats as opposed to +8/+8.

Aside from direct hero nerfs, some heroes were inadvertently affected by the select choice removal of certain minions. With Pogo-Hopper removed from the pool, both Jandice Barov, Dinotamer Brann, and Shudderwock will be weaker since they’ll be losing an alternate win condition strategy. But Jandice Barov should still be a top-tier hero because she can string together multiple strategies to find herself on top of Battlegrounds lobbies, especially whenever Murlocs and Demons are in the pool. With Whirlwind Tempest removed, Al’Akir and Divine Shield Windfury minion, in general, will be slightly less effective. Mega Windfury could also often end games depending on if they won the 50/50 of swinging first—and removing a consistent source of Mega Windfury is always welcome.

Chenvaala, Patchwerk, King Mukla, and Sindragosa receiving collective buffs will make them more appealing when players are forced to pick them as an option. In regard to Patchwerk’s buff, while it doesn’t bring him back to his original 60 health glory, the five health increase received in this change will allow Patchwerk to play more aggressively and potentially level faster due to his 15 bonus health overall.

Chenvaala’s buff will reward players using her even more if they’re lucky enough to find Elementals in Bob’s Tavern, adding more rewards to her “Feast or Famine” formula. King Mukla’s exact chance for a Big Banana is a 20-percent chance, according to associate game designer Cora. It can be expected that King Mukla’s will now be able to dwarf opponents on banana usage since Mukla can gain anywhere from +2/+2 to +4/+4 bonus stats every turn, where opponents will only receive +1/+1 every other turn.

What the minion updates mean for the Battlegrounds meta

The most notable early buff is that Selfless Hero is no longer a tier-one unit. It’s been bumped up a tier. This means that players can no longer start picking up Selfless Heroes for late-game comps as soon as turn one. Consciously buying one in the early game means you need to sacrifice a lot of stats and tempo to purchase her for later.

Deadly Spore’s nerf to a higher tier also makes Poisonous and Divine Shield comps less consistent and rarer. While their potency will still be powerful, players will need to invest more turns into pivoting into these kinds of strategies.

Pirates as a whole have collectively been buffed, even if it’s only a few minor adjustments. Having extra stats allows them to shore up a slightly weaker early game. Early Elementals have also received similar levels of buffs, with Party Elemental receiving one bonus attack and Arcane Assistant receiving extra health. This will allow them to contest earlier boards much more easily.

The major point of focus for Elementals in this patch is how they’ve been changed in the later portions of the game. With Lil’ Rag being moved up to Tier Six, Elementals are now less reliable in finding triples at Tavern Tier Four since players could find both an early Nomi or Lil’ Rag and snowball the game from there. Gentle Djinni being found a tier earlier now allows him to achieve his fantasy of finding multiple Elementals during combat much easier.

Majordomo Executus now always grants a +1/+1 buff even if you never found an Elemental. This change allows players to more frequently pick up Majordomo Executus since his scaling was minimal when compared to other options around his tier.

You can try out all of these new Battlegrounds changes when Hearthstone Patch 18.4.2 goes live on Oct. 15.