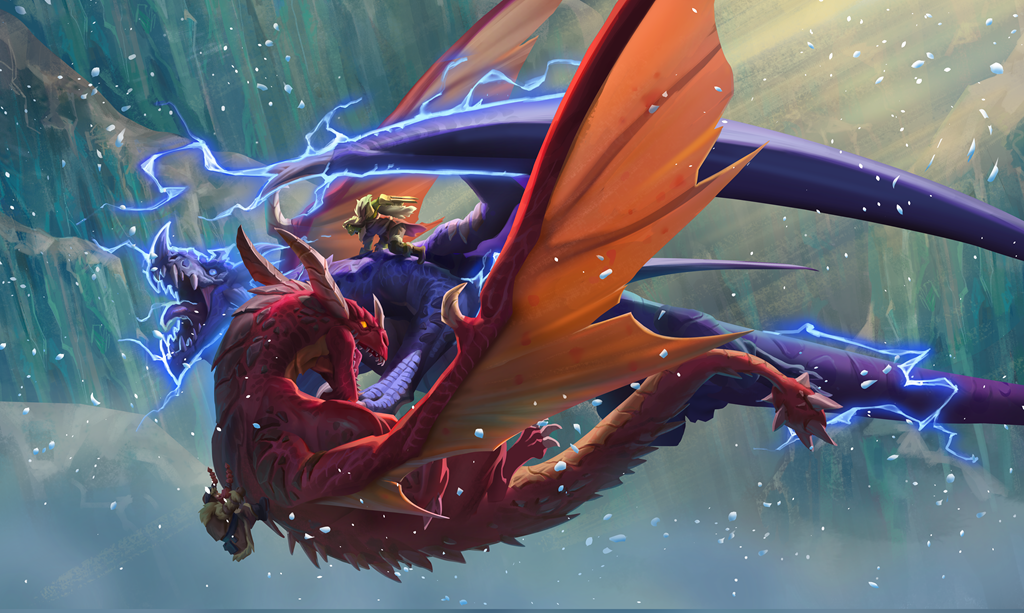 Though the past few months of Hearthstone have been dominated by Hunter, Rexxar isn’t the only Hero having fun.

Even if the expansion feels unbalanced at times, Descent of Dragons still managed to introduce some super fun decks to Hearthstone. Since a new expansion is right around the corner, here are a few decks you should take for a spin while you still have the chance. Some of these decks include cards that will rotate out in the coming year, so remember to craft with caution.

Prior to the Conjurer’s Calling nerf, Highlander Mage was one of the strongest decks in the game. It received more support when Amazing Reno was introduced through the latest solo adventure, but the deck still isn’t considered top-tier. That being said, the deck is still extremely fun. Though it probably isn’t as fast as you may like it to be, the deck offers so many paths to victory that winning feels fresh every time. With Cards like Zephry’s, Reno, and Dragonqueen Alexstrasza sticking around, you can expect to see a new version of Highlander Mage when the next expansion launches.

Use this code to copy the deck for Hearthstone: AAECAf0EHooByQOrBMUEywSNCL7sAs7vAu72Asb4AqCAA+iJA4OWA5+bA6CbA4qeA6GhA8KhA/yjA4ukA5KkA/KlA4SnA/qsA/CvA5GxA4S2A4y2A+G2A5+3AwAA

Another unique deck being shrouded by the meta is Quest Druid. This deck revolves around the quest card Untapped Potential. This card eventually allows the Druid player to earn a Passive Hero Power called Ossirian Tear. This causes your “choose one” cards to have both effects. Since Embiggen and Token Druid are doing so well in the meta, Quest Druid hasn’t seen as much play. This is a shame because Untapped Potential is one of the most rewarding Quest cards currently in Hearthstone. If you play Druid, this one is definitely worth taking for a spin.

Use this code to copy the deck for Hearthstone:
AAECAZICBiSu0gL1/ALYoAP4oQP2rQMMQFZf/gHEBr/yAqmiA8iiA++iA9mpA/m1A8a3AwA=

Another fun deck being eclipsed by its brother in the meta is Holy Wrath Paladin. If you’re playing against a Paladin deck on the ladder, it’s probably some sort of Mech build. Though Mechs are fun, it’s a shame they’re overshadowing one of the most fun builds in the game right now. Holy Wrath Paladin is essentially an OTK deck. You’ll spend most of the match setting up for the Holy Wrath and Shirvallah combo. Shirvallah the Tiger costs 25 mana, but costs one less for each mana you’ve spent on spells. Holy Wrath causes you to draw a card and then deal damage equal to its cost. Combining the two makes for one heck of a wombo combo.

Use this code to copy the deck for Hearthstone:
AAECAZ8FDPoBhQPtBfQFzwb7DP37AoT8Ar2GA/yjA5asA/22AwmcArMD3AP2B6f3Avz8Atn+As+GA+yGAwA=

Use this code to copy the deck for Hearthstone:
AAECAaIHHrQBsgLtAs0DrwSIB8f4AqCAA4+XA5CXA5KXA/uaA/6aA/yjA/KlA4SnA/WnA7euA7muA7+uA8GuA/6uA6qvA86vA/2wA4KxA5GxA+O0A5+3A8vAAwAA

Admittedly the weakest deck on this list, Aggro Overload Shaman looks to make the best out of a bad situation. Early in the Descent of Dragons expansion, Shaman was on top of the mountain. After a series of nerfs all but butchered the class, most players have abandoned it entirely. For those of you who are stuck with a ton of Shaman cards and nothing to play, Aggro Overload Shaman is definitely worth the try. The fun in this deck comes from the element of surprise. Since your opponent will often expect Galakrond Shaman, you’re able to set up big face damage with cards like Cumulo-Maximus and Lava Burst. If you want to give your Shaman collection one last chance, this is the deck to do it with.

Use this code to copy the deck for Hearthstone:
AAECAaoIApn7Au2tAw7vAeAC+QPgBrDwAvbwAo/7Apz/AoyFA/aKA8aZA7WtA7atA/muAwA=