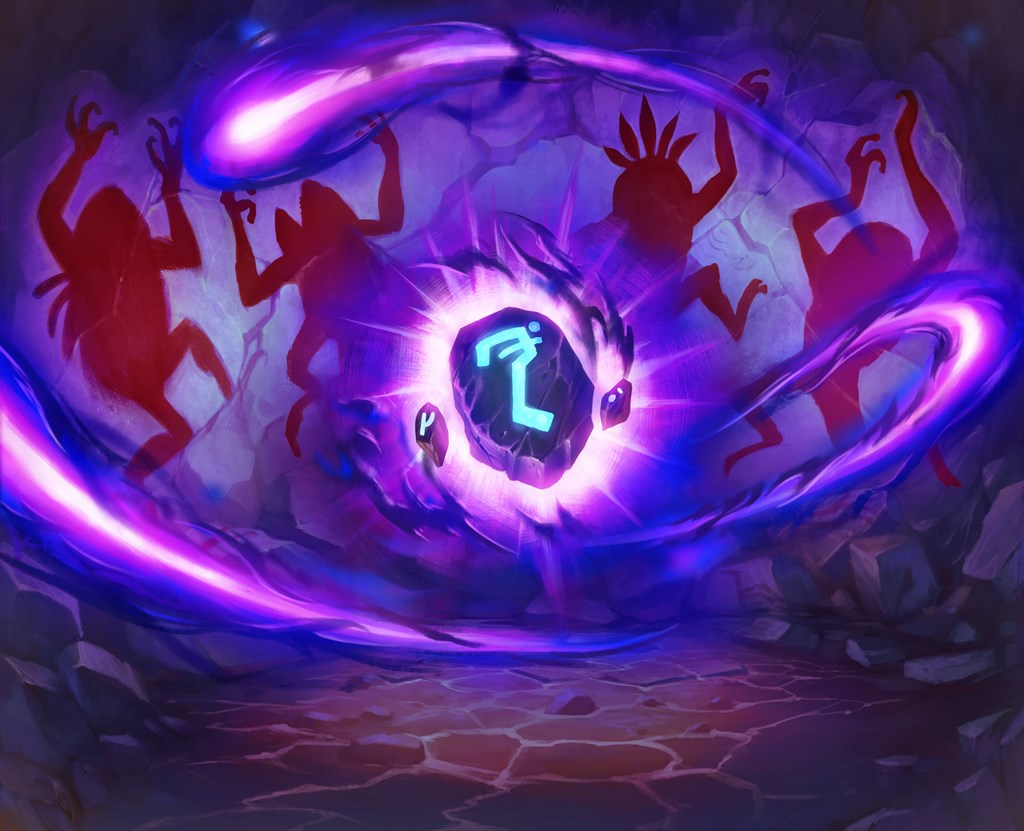 Priest’s offerings in the Un’Goro meta shine best in the format’s slower cycles. Dragon Priest and Control Priest attack the more controlling strategies in the format in different ways and attempt to check the popularity of Mage on ladder. Silence Priest punishes the likes of Jade Druid with its efficient development of indomitable minions. All three strategies require tight lines of play and knowledge of the current meta, but when played at the right time in capable hands, can send you rising up the ranks.

Dragon Priest is a midrange deck that uses Priest’s efficient removal suite and dragon synergies to attrition its opponent. The deck plays well against control matchups where its individual card power trumps its opponent’s, but struggles against aggressive strategies that go underneath it.

Dragon Priest gets its name from the many dragons and dragon synergies that populate the deck. The biggest draw to the archetype is the ability to play Drakonid Operative, a dragon that doubles as both win condition and card advantage. Drakonid Operative provides sufficient board pressure on its own in the middle turns and grabs additional removal, threats, or other resources from your opponent’s deck.

Primordial Drake stabilizes the board as the game reaches its later stages. Primordial Drake acts as the last AOE effect to end the aggressive deck’s chances at a win or as a measure to buy time to deploy more expensive resources from your hand. Netherspite Historian discovers another dragon and gives the deck some much needed versatility. Discover an additional Drakonid Operative to continue winning the resource war, a Twilight Drake to fill your curve and create profitable trades with the opponent’s board, or Ysera to give the deck another late game trump in the control matchup. Despite costing only two mana, Netherspite Historian’s best use is in the middle turns to ensure Drakonid Operative’s Battlecry trigger. Mulligan the card if it’s in your opening hand.

Dragon Priest wins the resource war and attritions its opponent by playing several cards that generate or threaten to generate additional value if left unchecked. Lyra the Sunshard is the most powerful among these cards and demands an immediate answer from the opponent. On curve, Lyra requires the opponent to respond the following turn instead of developing his/her own position and paves the way for an unchecked Drakonid Operative the following turn. Similarly, Drakonid Operatives tax your opponent’s resources in the middle of the game and allow Lyra to take over the game late.

Northshire Cleric provides card draw in conjunction with Priest’s Hero Power. Power Word: Shield increases the survivability of your utility cards like Northshire Cleric and Lyra the Sunshard while replacing itself. Elise the Trailblazer simultaneously adds board pressure and more resources in the form of an Un’Goro pack should the game go late. Use Shadow Visions to grab another copy of the Un’Goro pack to double the resource gain or find another answer in your deck. All of these cards combined ensure your hand remains stocked with resources while your opponent’s depletes.

While the deck presents a strong game in control matchups, it can struggle in aggressive ones. Potion of Madness, Defender of Argus, Priest of the Feast, and Dragonfire Potion combine to strengthen these matchups and enable Dragon Priest’s more robust middle and late game. Potion of Madness creates two-for-one potential with your opponent’s early game threats, often clearing the board in the first couple turns if the opponent isn’t careful. Defender of Argus turns a Cleric, Historian, or Talonpriest into a barrier that preserves your life total. Priest of the Feast provides a large body and burst heal potential with the deck’s several cheap spells. Dragonfire Potion is the deck’s main source of AOE removal and swings the game heavily in your favor if dragons are on your side of the field. If you find the pace of this AOE removal unsatisfactory, add Auchenai Soulpriest and Circle of Healing to provide this effect earlier in the game. After surviving the early game, Dragon Priest’s power middle and late game should take over.

Control Priest plays a longer game that wins through Medivh the Guardian or its heavy resource advantage amassed over the course of the game. While the list shares similarities with Dragon Priest, it rejects the dragon package for more consistent, albeit less powerful, options.

Early in the game, your goal is simply survive. Potion of Madness and Shadow Word: Pain deal with your opponent’s early threats while you begin to develop value with Northshire Cleric and Radiant Elemental. Curious Glimmerroot provides another early body and replaces itself with a card from your opponent’s deck. Using Glimmerroot successfully requires knowledge of the current metagame and its corresponding decklists, so prepare accordingly. Use your life total as a resource—use your Hero Power to restore your minions rather than yourself.

Reacting to the board gets easier as the game enters its middle turns. Access to Priest of the Feast, Holy Nova, and Dragonfire Potion work together to continue managing your opponent’s board state and restore your life total. Dirty Rat creates additional value from your Dragonfire Potions in more aggressive matchups or shuts down certain Battlecry win conditions, such as Burn Mage’s Medivh and Alexstraza. Shadow Word: Death removes larger, more expensive threats at an efficient cost.

Play Elise the Trailblazer as close to on curve if possible—the earlier the Un’Goro pack enters the deck, the better. Use Shadow Visions to pick up a copy of the Un’Goro pack and refuel after a particularly taxing early game. Elise and Shadow Visions combine to set the stage for later turns where Control Priest starts to proactively work towards winning the game.

After you’ve gained control of the board and maintain card advantage over your opponent, it’s time to turn the corner. Control Priest provides a win condition through Medivh, the Guardian, or value generated from Lyra the Sunshard or Elise the Trailblazer. Medivh provides an imposing board presence on its own, but creates even more pressure through Priest’s spells. Medivh into Free From Amber threatens to end the game quickly while demanding several responses from your opponent. Lyra and Elise generate an abundance of resources that inevitably take over a game. Lyra can find additional Priest class cards like Divine Spirit and Inner Fire that turn a minion into a quick clock. Choose the win condition that best suits the situation and end the game.

Several players have decided to cut some of the deck’s slower elements for a more combo-oriented finish. Adding Divine Spirit and Inner Fire gives the deck reach at any stage in the game. You can turn your Radiant Elemental into an effective beater and punish your opponent’s slow start, or turn a topdeck Priest of the Feast into a game-ending threat. What the deck loses in card advantage, it makes up for in flexibility and consistency—your win condition no longer relies on random generation via Medivh, Lyra, or an Un’Goro pack. Play one of each, let Shadow Visions tutor up any missing pieces, pick your moment, and end the game.

Silence Priest overcomes minions with deficient abilities through silence effects, then buffs these silenced minions to a powerful, fast finish. The deck performs well against slower strategies lacking unconditional spot removal, but flounders on occasion against aggressive decks that expose its inconsistency.

Enter Purify. The scorn of One Night in Karazhan, Purify is this deck’s salvation. Purify silences a friendly minion and draws a card. Purify turns Ancient Watcher and Humongous Razorleaf into minions that can attack. Power up these new attackers with the Divine Spirit-Inner Fire package and end the game in two or three turns.

The deck needs more silence effects to achieve its goal. Silence, as advertised, silences a minion on either side of the board for no cost. Use it on your minions if you can’t find Purify or need to spend mana elsewhere. If you have silence effects to spare, use Silence to push through an enemy Taunt, like a Paladin’s Spikeridged Steed, or deal with other minions with active effects, such as Acolyte of Pain or Aya Blackpaw. Shadow Visions can tutor another copy of Purify or Silence anytime your hand is lacking, effectively adding another two copies of these effects to your deck.

After your minion is silenced, it’s time to begin attacking your opponent and end the game. Divine Spirit and Inner Fire offer the most efficient method, doubling a minion’s health, then equaling the minion’s attack value with its health. By themselves, Divine Spirit and Inner Fire turn your Humongous Razorleaf into a 16/16 attacking on turn four. Kabal Talonpriest and Power Word: Shield further empower the Divine Spirit-Inner Fire combo, the former providing an additional threat in a pinch. Shadow Visions can tutor for any piece of the combo missing for the last bit of damage to end the game.

Keep in mind your resources are limited. When you go all-in on a minion, be confident that your minion can survive long enough to end the game. Faceless Shambler copies the attack and health of a friendly minion and provides Taunt, protecting your board and life total and adding another must-answer threat to the board. Acolyte of Pain combined with Young Pyromancer cycles resources and deals with early, aggressive board states from the opponent. Both minions also represent respectable combo targets if other options are lacking due to their ability to control the board and draw cards. Read the board and find the line to victory.

In matchups where you know your opponent has unconditional spot removal, such as Taunt Warrior or Control Priest, it’s important to diversify your threats early and only commit the combo for a lethal attack. Lyra the Sunshard excels in these matchups— demanding a response from your opponent while providing card advantage to you. Use Lyra to force removal from your opponent to clear the path for a Razorleaf next turn or recycle your resources towards a win condition if the game goes late. Get in chip damage where you can, coax out your opponent’s removal, then smash them when there’s nothing left.